Calama was a colonia in the Roman province of Numidia situated where Guelma in Algeria now stands.[1]

G. Mokhtar places it just within the Roman province of Africa Proconsularis, to the east of Numidia,[2] but it is generally believed to have been in Numidia,[3][4][5][6] a province created probably in 198–199.[2]

The city was founded by the Phoenicians and called Malaca, a word meaning "salt" that lies at the root also of the name of the city of Málaga in Spain.[7] It was situated in Numidia and, when this area came under Roman rule, the city was renamed Calama.

Whether Calama is identical with the town of Suthul which the Roman propraetor Aulus Postumius Albinus Magnus unsuccessfully tried to take in 110 BC,[8] (cf. Battle of Suthul) is disputed, with some denying[9] and others cautiously affirming.[10][11]

In the 1st century AD, Calama, then part of the Roman province of Numidia, became a major urban centre, being given the rank of a Roman municipium as early as Hadrian, and of a colonia later.[10] It was sponsored by Vibia Aurelia Sabina, sister of the Emperor Commodus (late 2nd century). Calama was, with Setifis (Setif) and Hippo Regius (Annaba), one of the granaries of Rome in the 2nd and 3rd centuries AD. Under Septimius Severus the city became one of the most prosperous in the Roman empire, with thermae and a huge theatre.[12]

Calama became a Christian bishopric, four of whose bishops are named in extant documents:

Possidius wrote the first biography of Augustine,[16][17] in which he lets it be known that he himself was one of the clergy of Augustine's monastery when he was appointed bishop of Calama.[18] When Calama fell into the hands of the Vandal king Genseric in 429, Possidius took refuge with Augustine within the walled city of Hippo Regius.[16] He was present at Augustine's death in 430.

No longer a residential bishopric, Calama is today listed by the Catholic Church as a titular see.[19]

The invading Vandals captured and partially destroyed Calama and defeated Count Bonifacius near the city in 431.[10]

After the reconquest of North Africa by the Byzantines, Solomon (a general of Justinian I) built a fortress there between 539 and 554. Calama's population was fully Christian in the 6th and 7th century.

Then came the era of the Muslim conquests and slowly Calama disappeared around the 11th century. For its further history, see the article on Guelma. 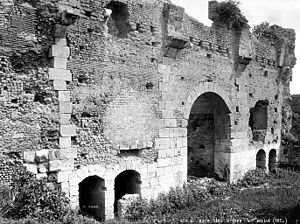