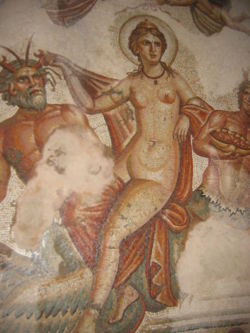 Mosaic from the House of Amphitrite, Bulla Regia

Bulla Regia is an archaeological site in northwestern Tunisia, a former Roman city near modern Jendouba called officially Colonia Aelia Hadriana Augusta Bulla Regia. It is noted for its Hadrianic-era semi-subterranean housing, a protection from the fierce heat and effects of the sun. Many of the mosaic floors have been left in situ; others may be seen at the Bardo Museum, Tunis. There is also a small museum connected with the site.

In the unique domus architecture developed in the city, a ground-level storey, open to the warming winter sun, stood above a subterranean level, built round a two-story atrium. Open-bottomed terracotta bottle-shapes were built into vaulting. Water sprinkled on the floors brought the colors of the mosaics to life while they provided cooling by evaporation. 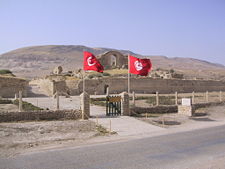 Entrance to the site

In the House of the Hunt, the basilica, with an apse at its head, a transept and dependent spaces opening into what would be the nave if it were a church, has been instanced (Thébert) as an example of the conjunction between public architecture and the domus of the ruling class in the fourth century, spaces soon to be Christianized as churches and cathedrals.

The subtle colors and shading and the modelling of three-dimensional forms of the finest mosaics at Bulla Regia are not surpassed by any in North Africa, where the Roman art of mosaic floors reached its fullest development. The mosaic of a haloed Amphitrite (House of Amphitrite) is often illustrated (above, right).

The Berber origins of Bulla Regia probably pre-dated its Punic culture: imported Greek ceramics of the fourth century BCE have been found; it came under the hegemony of Carthage during the third century, when inscriptions reveal that the inhabitants venerated Baal Hammon and buried their dead in urns, Punic style. A capital from a temple of Tanit is preserved at the site's museum.

Broadly speaking, Bulla Regia was part of the territory conquered for Rome in 203 BCE by Scipio Africanus, but in 156 BCE it became the capital of the Numidian king Massinissa, who "recovered the lands of his ancestors", according to an inscription, and gave to the site its epithet Regia ("Royal"); later, one of his sons had a residence in the city. Under the Numidians, a regularized orthogonal grid street plan in the Hellenistic manner [1] was imposed on at least part of the earlier irregular system of alleys and insulae (Thébaut). The Romans assumed direct control in 46 BCE, when Julius Caesar organized the province of Africa Nova and rewarded the (perhaps simply neutral) conduct of Bulla Regia in the Civil Wars by making it a free city. Under Hadrian, it was refounded as Colonia Aelia Hadriana Augusta Bulla Regia, giving its citizens full Romanitas.

Its small amphitheatre, the subject of a reproach in a sermon of Augustine of Hippo, retains the crispness of its edges and steps because it lay buried until 1960-61. To this day, the Roman Catholic Church retains this site as a bishopric, a titular see, Bullensium Regiorum.

After its season of flourishing[vague], Bulla Regia was slowly degraded under Byzantine rule. As elsewhere in the Late Empire, the local aristocracy found themselves in a position to increase the extent of their houses at the expense of public space: the House of the Fisherman was adapted to link two separate insulae turning a thoroughfare into a dead end. Finally an earthquake destroyed Bulla Regia, collapsing its first floors into the subterranean floors.

Drifting sand protected the abandoned sites, which were forgotten until the first excavations were begun, in 1906, in part spurred by the destruction of the monumental entrance to the Roman city.

The forum, surrounded by porticoes, was excavated in 1949-52. Its public basilica had an apse at each end. As a cathedral it had a highly unusual cruciform baptismal font inserted in the center of the rear (west end) of its nave (Jensen).

Bulla Regia was important enough to become a bishopric, suffragan of Carthage, which transformed the civil basilica into its cathedral. It declined with the city and the arrival of Islam.

It was however nominally restored as a titular see and so far had the following near-consecutive incumbents, of the lowest (episcopal) rank, with a single archiepiscopal exception: