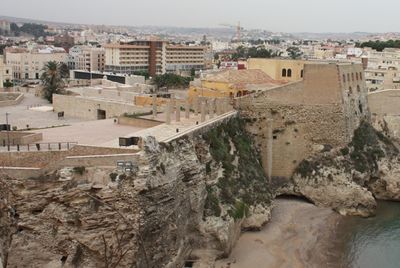 Rusadir (even Rusaddir for the Romans and the Catholic church, and Ryssadeiron (Ancient Greek: Ῥυσσάδειρον) for the Greeks) is an ancient Roman city of Mauretania Tingitana. It was originally a Phoenician and later Punic establishment under the name of "Rhusadhir". Later it became a part of the Roman North Africa as a Roman Colonia, according to the "Itinerarium Antonini". Currently it is called Melilla.

Rusadir is one of the berber nations historical cities in north africa. It is mentioned by Ptolemy (IV, 1) and Pliny (V, 18) who call it "oppidum et portus", also by Mela (I, 33), under the corrupted form Rusicada and by the Itinerarium Antonini.[1]

Romans occupied Rusadir in the first century under Augustus and later opened a coin mint. Emperor Claudius created a Roman colony in 46 AD with the name Flavia.[2]

In the third century Rusadir was fully Christian and enjoyed huge prosperity. Emperor Diocletian made it part of Hispania province in 385 AD.[3] In the late fourth century was the Roman port of commerce to the Regnum Maurorum et Romanorum. Vandals sieged and conquered the city around 430 AD, but a few years later it was controlled by the Altava berber kingdom. The Eastern Roman Empire of Justinianus I conquered temporarily the city, that had less than 3,000 inhabitants after the suffered sieges and destructions. The king of Visigots Sisebuto conquered Rusadir in 614 AD and reconstructed the destroyed city walls: the city become "Episcopal See". The Bizantine empire after some years recovered the city, but it fell to the Arabs around 701 AD.

Since then Rusadir remained nearly depopulated and reduced to a small village. Only some centuries later, in 1497, it was rebuilt and renamed Melilla by the Castilians.