From Infogalactic: the planetary knowledge core
Jump to: navigation, search
This article is about a city in Spain. For the Spanish province, see Province of Ciudad Real.

Ciudad Real (Spanish pronunciation: [θjuˈðað reˈal]; English: Royal City) is a city in Castile–La Mancha, Spain, with a population of c. 75,000. It is the capital of the province of Ciudad Real. It has a stop on the AVE high-speed rail line and has begun to grow as a long-distance commuter suburb of Madrid, which is located 115 miles (185 km) to the north of Ciudad Real. 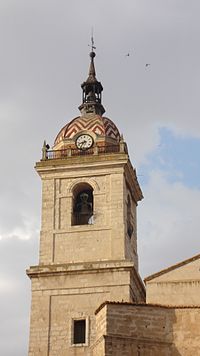 Ciudad Real was founded by King Alfonso X The Wise in the 13th century (1255) to fight with the Military Order of Calatrava. During the Middle Ages, four kilometres of walls and one hundred and thirty towers protected a population made up of Christians, Muslims and Jews.

After the unification of the Iberian kingdoms under the Catholic Monarchs, Ciudad Real became the capital of the province of La Mancha in 1691. This fact favoured its economic development which was shown by the construction of several important buildings. In 1755, however, an earthquake centred on Lisbon destroyed many of these buildings. In 1809, during the Peninsular War, French troops defeated their Spanish counterparts and occupied the city, using the local hospital as their headquarters and barracks. 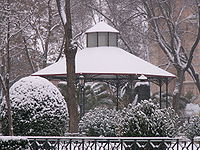 The Plaza Mayor sits in the centre of Ciudad Real. Today, only two parts of the wall that surrounded the city in medieval times remain standing.

Don Quixote's Museum is situated next to Parque de Gasset.

The Museo Elisa Cendreros exhibits an old collection of fans and carved wood.

The Iglesia de Santiago is the oldest church in Ciudad Real. It was built at the end of the 13th century. Its style is Gothic. It has three blocks divided into two parts. It is decorated with gothic paintings and with seven-headed dragons, which were used such us amulets against the bad spirits. The ceiling is decorated with stones forming eight pointed stars.

Another important church in Ciudad Real is Iglesia de San Pedro (Church of Saint Peter). It is the most interesting and typical monument of the city. It was built during the 14th and 15th centuries. Its style is Gothic, and it houses the tomb of Chante de Coca, confessor and chaplain of the Catholic Monarchs. In the year 1420 the King of Castile and León Juan the II, gave him the title to Ciudad Real (Royal Town).

Ciudad Real Cathedral, built in the 16th century, has the second-largest nave in Spain and a magnificent Baroque altarpiece.[1]

One of the most popular festivals in the city is La Pandorga, which takes place July 30 and 31. On the last day of the month the festival honours its patroness, La Virgen del Prado. The usual attire of the participants consists of jeans, a white shirt, and the traditional handkerchief. 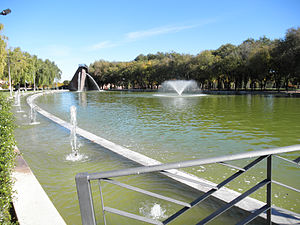 The handball club was one of the best in the world and its former hall, the Don Quixote Arena, is one of the biggest in the Spanish professional league. BM Ciudad Real, however, moved its team to Madrid. Its name became BM Neptuno but for sponsorship reasons was often referred to as Atlético Madrid. In 2013, BM Neptuno also disappeared.

Ciudad Real also has a basketball team, which included David De la Rubia, one of the most renowned Spanish players in recent years.

A high-capacity airport (Ciudad Real Central Airport) was built to serve the city, but closed in 2012. The privately funded airport cost an estimated €1 billion to build. It is now for sale for €100 million plus payment of the developer's debt, although in July 2014 this was reduced to €80 million in a further attempt to find a buyer. In July 2015 the airport was auctioned resulting in only one bidder, Chinese company Tzaneem International offering €10'000.

The city features a typical mediterranean climate, with chill winters and very hot summers. The autumn is the season when most of precipitation falls. 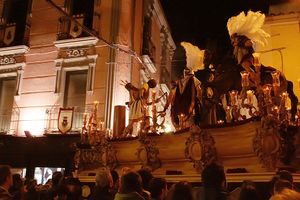