From Infogalactic: the planetary knowledge core
Jump to: navigation, search
For other uses, see Soria (disambiguation).

Soria (Spanish pronunciation: [ˈsoɾja]) is a city in north-central Spain, the capital of the province of Soria in the autonomous community of Castile and León. In 2010 the municipality has a population of c. 39,500 inhabitants, nearly 40% of the population of the province. Situated on the Rio Duero in the east of the autonomous community, the city is noted for its walls and a number of architecturally distinctive churches.

It is claimed that in Roman times there was a castle called Oria, purportedly named after a Greek knight called Doricus. Based on this folk etymology, some historians guessed that the first inhabitants of this city might have been the Dorians. Archaeology has not confirmed that story. Instead it has suggested that the first inhabitants were the Suebi, whose kings (as reported by Tutor and Malo in their Compedio historial de las dos Numancias) established one of their courts in Soria. These two hypotheses have been abandoned because of lack of evidence. It seems more likely that the name Soria may have its origin in the word dauria from the river Durius (Duero).

Main article: History of Soria
File:Ermita El Mirón2.JPG
Madonna del Mirón Hermitage, started to be built in the 6th century by the Suebi.

The area of Soria was inhabited by the Iberians, who merged with the Celts to form the Celtiberians around the 4th century BC.

During the Roman conquest of Iberia, Soria was besieged and its population committed a collective suicide in order to escape slavery. After the fall of the Western Roman Empire, the rebuilt city was occupied by the Suebi. Later, after the Arab conquest of Spain, it grew in importance due to its proximity to the border of the Christian lands, which in the 8th century had settled along the Duero river.

In 869 Soria was the centre of the rebellion of Suleyman ibn-Abus against the emir of Córdoba, who sent his son Hakan to quench it. In the early 12th century the city was conquered by Alfonso I the Battler, being absorbed into the Kingdom of León in 1134. Due to its strategic placement at the borders of the Kingdoms of Castile, Aragon, Navarre and León, Soria in the Middle Ages was at the centre of several conflicts between them. Alfonso VIII of Castile, in reward for its support, gave the city several privileges which it maintained until modern times. In 1195 the town was stormed by Sancho VII of Navarre, but later recovered and continued to develop its splendour and trades, mostly held by a community of Jews.

Soria lost most of its importance after the unification of Aragon and Castile in 1479, and above all after the decree of exile issued against the Jews in 1492. In the War of Spanish Succession (early 18th century), Soria sided for Philip V. In 1808 it was captured and set on fire by the French troops.

The economical and social crisis of Spain in the early 20th century, and the Spanish Civil War with Francisco Franco's dictatorship which followed, had negative effects on Soria and its neighborhood, which became depopulated due to strong emigration.

The policy of the current authorities aims to strengthen the local economy pivoting on Soria's tourism potential, and has also launched a program of reconstruction for the neighbouring villages.

Soria sits on the banks of Douro river, in its upper course. Its municipality is formed by the city, Barrio Las Casas and three locations: Oteruelos, Pedrajas and Toledillo. 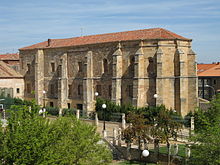 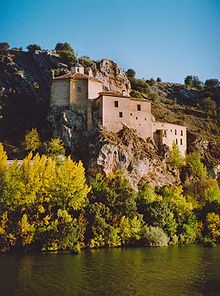 A few kilometres north of the town are the ruins of Numantia, a Celtiberian town whose inhabitants destroyed it rather than let it fall to Scipio. In Soria is the Museo Numantino, devoted to the archaeological remains of this site. 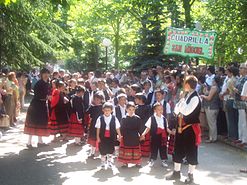 The 20th-century Spanish poet Antonio Machado spent five years in Soria teaching French in a secondary school in the early part of the century, before spending 12 years in the neighbouring town of Segovia. These years were to prove essential to his further literary development. He married and lost his wife there and discovered much about the nature of the Castilian people – a subject the Generation of '98 authors were very interested in.

The firewalking rituals performed at the Sorian village of San Pedro Manrique every June as part of the festival of San Juan have been declared as a tradition of National Tourist Interest and have attracted global attention through ethnographic and scientific studies and media coverage. [2] [3]

Two of Spain's foremost runners of the late 20th century lived and trained in Soria: Fermín Cacho, a gold medallist at the 1992 Barcelona Olympics, and Abel Antón, a two-time World Champion in the marathon. The area in which they trained, Monte Valonsadero, is now host to the annual Cross Internacional de Soria meeting – one of Spain's most prestigious cross country running competitions.[4][5]

The European Youth Orienteering Championships were held in Soria in July 2010.