Huesca (Spanish pronunciation: [ˈweska]; Aragonese: Uesca) is a city in north-eastern Spain, within the autonomous community of Aragon. It is also the capital of the Spanish province of the same name and the comarca of Hoya de Huesca. In 2009 it had a population of 52,059, almost a quarter of the total population of the province. That makes it one of the least populated provincial capitals in Spain.

Huesca's pre-Roman Iberian name was Bolskan. It was the capital of the Vescetani, in the north of Hispania Tarraconensis, on the road from Tarraco (modern Tarragona) and Ilerda (modern Lleida) to Caesaraugusta (modern Zaragoza)[2] and fell under Caesaraugusta's jurisdiction. Pliny alone[3] places the Oscenses in Vescitania, a district mentioned nowhere else.[4] The city's name was rendered as Osca, and was a Roman colony, Urbs Victrix Osca, during the Roman Empire. Under the impetus of Quintus Sertorius, the renegade Roman and Iberian hero who made Osca his base, the city minted its own coinage and was the site of a prestigious school founded by Sertorius to educate young Iberians in Latin and Romanitas in general. We learn from Plutarch[5] that it was a large town, and the place where Sertorius died. It is probably the town called Ileoscan (Ἰλεόσκαν) by Strabo, in an apparently corrupt passage.[6] It seems to have possessed silver mines,[7] unless the argentum Oscense here mentioned merely refers to the minted silver of the town.

18th-century Spanish historian Enrique Flórez, however,[8] has pointed out the impossibility of one place supplying such vast quantities of minted silver as we find recorded in ancient writers under the terms argentum Oscense, signatum Oscense; and is of the opinion that "Oscense" in these phrases means "Spanish", being a corruption of "Eus-cara".[9] The fully Romanised city, with its forum in the Cathedral square, was made a municipium by decree of Augustus in 30 BC. 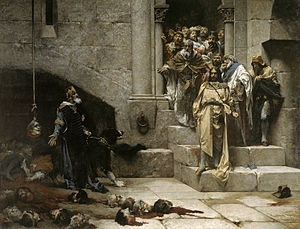 The Bell of Huesca, by José Casado del Alisal

With the Arab conquest in the late 8th century, the city came to be called Washqah (Arabic: وشقة), falling within the Tagr al-A'la, the Upper March of the Emirate of Córdoba. It was ruled by a local governor appointed from Córdoba, but was repeatedly subject to political turmoil, rebellion and assassination as the Banu Qasi, Banu Amrus and Banu al-Tawil clans, as well as the Arista dynasty of Pamplona, struggled for control, autonomy or independence from the Emirate, later Caliphate. In the mid-10th century, Wasqah was given to the Banu Tujibi, who governed the Upper March from Zaragoza, and it became part of their Taifa of Zaragoza when in 1018 they successfully freed themselves from the disintegrating Caliphate. In 1094 Sancho Ramirez built the nearby Montearagón castle with the intention of laying siege to Wasqah but was killed by a stray arrow as he was reconnoitring the city's walls. It was conquered in 1096 by Peter I of Aragon.

In 1354, King Peter IV of Aragon chartered the University of Huesca, which initially had a faculty of theology. The school expanded, but by the end of the 16th century was eclipsed by the University of Zaragoza.[10] The university was abolished in 1845.[11]

During the Spanish Civil War (1936–39) the "Huesca Front" was the scene of some of the worst fighting between the Republicans and Franco's army. The city was besieged by the Republicans, George Orwell among them (see below) but never fell. 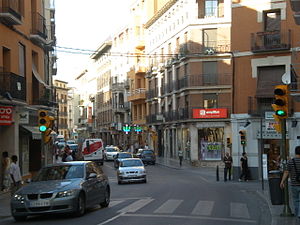 Huesca celebrates its most important annual festival in August: the festival (or fiesta) of San Lorenzo (Saint Lawrence), a native of Huesca martyred in 268 AD. The anniversary of his martyrdom falls on August 10. The fiesta starts on 9 August and finishes on the 15. Many of the inhabitants dress in green and white for the duration of the fiesta.

San Lorenzo, born in Huesca, was a deacon in Rome and martyred by the Romans, burned on a grille (at least according to legend). Hence the grille is the symbol of San Lorenzo. It can be seen in a number of decorative works in the city.

Huesca is also the birthplace of film director Carlos Saura and his brother Antonio Saura, contemporary artist. There is an international film festival held annually.

The writer Oscar Sipan, winner of several literary prizes, was born in Huesca in 1974. The celebrated illustrator Isidro Ferrer, though born in Madrid, lives in the city.

Huesca has a mediterranean climate (Köppen climate classification Csa), with drier summers, and wetter springs and autumns, but with some characteristics of a continental climate, such as more extreme temperatures, as the town lies in a wide basin (the Ebro basin) entirely surrounded by mountains. 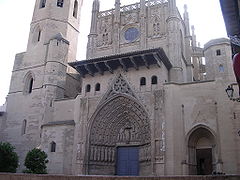 A double line of ancient walls can still be seen in present-day Huesca. 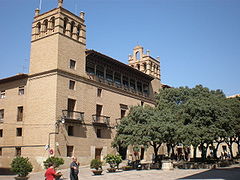 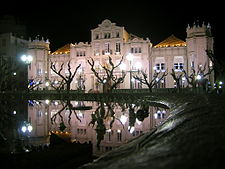 Huesca is notable for the saying "Tomorrow we'll have coffee in Huesca", a running joke among militiamen of the Spanish Civil War. In February 1937, George Orwell was stationed near the falangist-held Huesca as a member of the POUM militia. In Homage to Catalonia, Orwell writes about this running joke, originally a naïvely optimistic comment made by one of the Spanish Republican generals:

Months earlier, when Siétamo was taken, the general commanding the Government troops had said gaily: "Tomorrow we'll have coffee in Huesca." It turned out that he was mistaken. There had been bloody attacks, but the town did not fall, and [the phrase] had become a standing joke throughout the army. If I ever go back to Spain I shall make a point of having a cup of coffee in Huesca.

Orwell never did, but the Indian writer Shashi Tharoor fulfilled his wish on his behalf in 1980, and has written about the experience.[13] Huesca is also famous for the legend of the Bell of Huesca.

The following are Sister cities of Huesca:[14]