Limoncello (Italian pronunciation: [limonˈtʃɛl:o]) is an Italian lemon liqueur mainly produced in Southern Italy, especially in the region around the Gulf of Naples, the Sorrentine Peninsula and the coast of Amalfi, and islands of Procida, Ischia, and Capri.[1] It is also produced in Abruzzo, Basilicata, Apulia, Sicily, Sardinia, Menton in France, and the Maltese island of Gozo. Although there is debate about the exact origin of the drink, it is at least one hundred years old.[2][3]

Traditionally, it is made from the zest of Femminello St. Teresa lemons, also known as Sorrento or Sfusato lemons.[3][4] Lemon zest, or peels without the pith, is steeped in rectified spirit until the oil is released. The resulting yellow liquid is then mixed with simple syrup. Varying the sugar-to-water ratio and the temperature affects the clarity, viscosity, and flavor. Opaque limoncellos are the result of spontaneous emulsification (otherwise known as the ouzo effect) of the sugar syrup and extracted lemon oils. 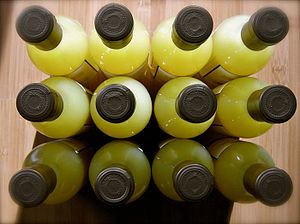 Limoncello is the second most popular liqueur in Italy[4] and it has recently become popular in other parts of the world. Restaurants in the United States, Canada, the United Kingdom, Australia, and New Zealand are now increasingly offering limoncello on their beverage and dessert menus.

The United States has seen a rise in commercial producers using California lemons which are grown year round, with 90% of the United States lemon crops coming from California. A popular ingredient in cocktails, limoncello imparts a strong lemon flavor without the sourness or bitterness of pure lemon juice.

Limoncello is traditionally served chilled as an after-dinner digestivo. Along the Amalfi Coast, it is usually served in small ceramic glasses that are also chilled. This tradition has been carried into other parts of Italy.[5]

An ethanol content of 28-32% is considered optimal for limoncello.[6]