From Infogalactic: the planetary knowledge core
Jump to: navigation, search
This article is about the British motorway. For other uses, see M6.

The M6 motorway runs from junction 19 of the M1 at the Catthorpe Interchange, near Rugby via Birmingham then heads north, passing Stoke-on-Trent, Liverpool, Manchester, Preston, Lancaster, Carlisle and terminating at the Gretna junction (J45). Here, just short of the Scottish border it becomes the A74(M) which continues to Glasgow as the M74.

The M6 is the longest motorway in the United Kingdom and one of the busiest. It incorporated the Preston By-pass, the first length of motorway opened in the UK and forms part of a motorway "Backbone of Britain", running north−south between London and Glasgow via the industrial North of England. It is also part of the east−west route between the Midlands and the east-coast ports. The section from the M1 to the M6 Toll split near Birmingham forms part of the unsigned E-road E 24 and the section from the M6 Toll and the M42 forms part of E 05.

The M6 motorway runs from junction 19 of the M1 and from the beginning of A14 in Catthorpe near Rugby in central England, passes between Coventry and Nuneaton, through Birmingham, Walsall and Stafford and near the major cities of Wolverhampton and Stoke-on-Trent.[1] The motorway has major junctions with the M56 and M62 at Warrington, giving access to Chester, Manchester and Liverpool.[2] The M6 then heads north past Wigan, Preston and Lancaster.[3] After the latter two cities it passes through Cumbria with some parts very close to the edge of the Lake District, and then passes Carlisle on its way to Gretna,[4] before the motorway becomes the A74(M) a few hundred metres (yards) short of the Scottish border.[5][6]

The first section of the motorway and the first motorway in the country was the Preston By-pass. It was built by Tarmac Construction and opened by the Prime Minister Harold Macmillan on 5 December 1958.[7] In January 1959 the Preston by-pass was closed because of rapid surface deterioration over a stretch of 100 yards (91 m) "due to water freezing and then thawing". Motorists were diverted to the old road while the UK road research laboratory at Harmondsworth pondered the importance of surface water drainage.[8]

Later, other sections of the motorway were constructed, and finally it was all linked together, giving an uninterrupted motorway length of 230 miles (370 km).[9][10][11] 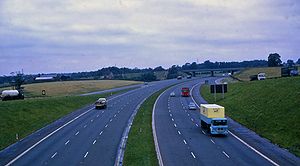 The M6 in Cheshire

The second phase of construction was completed in 1960, forming the Lancaster by-pass. Some 100 miles (160 km) south, the Stafford by-pass was completed in 1962.[12][13] By 1965, the remaining sections of motorway Stafford–Preston and Preston–Lancaster had been completed. 1968 saw the completion of the Walsall to Stafford link as well as the Penrith by-pass some 150 miles (240 km) north in Cumberland. In 1970, the Lancaster–Penrith link was completed, along with a short section of motorway by-passing the south of Walsall. The most northerly section of the motorway also opened in 1970, running to the designated terminus north of Carlisle. By 1971,[12] the full route was completed between the junction with the M1 motorway at Rugby and the A38 road several miles north-east of Birmingham city centre, including Bromford Viaduct between Castle Bromwich (J5) and Gravelly Hill (J6), which at 3½ miles is the longest viaduct in Great Britain.[14][15]

Junction 6 in Birmingham is widely known as Spaghetti Junction because of its complexity. On the elevated ground between Shap and Tebay, the north- and south-bound carriages split apart.[16] At this point a local road (to Scout Green) runs between the two carriageways without a link to the motorway.[17]

The section of the M6 that runs over Shap Fell in Cumbria is 1,050 ft (320 m) above sea level, one of the highest points on any motorway in the UK (junction 22 of the M62 on Saddleworth Moor is higher). The motorway engineers here chose to follow the route of the Lancaster and Carlisle Railway engineered by Joseph Locke (now part of the West Coast Main Line) where the motorway runs in a split-level cutting above the railway in the descent from Shap Fell through the Lune Gorge into southern Cumbria.[18]

The northbound entry slip road at Lancaster (junction 34) is unusually short, presenting problems for traffic joining the motorway. The M6 crosses the River Lune at this point and unless the bridge had been made wider, there was no space to build a longer slip road. This junction was upgraded from an earlier emergency-vehicles-only access point, which explains the substandard design.[19]

The route was originally intended to replace the old A6, which it does along the northern section starting with the Preston Bypass. However, a much closer approximation to the overall actual route of the M6 (heading north from its southern terminus) is provided by following the A45, A34, A50, A49, then the A6.[20] South of Preston, the A6 route is instead supplemented by the M61 as far as Manchester, with the M60 acting as a bypass around the city. South of Manchester, there is no true motorway replacement for the old road. The M1 acts as a bypass for long-distance traffic in the south, from the Kegworth junction near Nottingham, to Luton and St. Albans near London; but, it is not an alternative for local traffic as the routes diverge by more than 15 miles while passing through Northamptonshire. Across the Pennines, the old road remains the main local through-route, and long-distance fast traffic between Derby and Manchester must instead take either the A50 and M6, or M1 and M62.[21]

In July 1972 the UK Minister for Transport Industries announced that 86 miles (138 km) of UK motorway particularly prone to fog would benefit from lighting in a project which "should be" completed by 1973.[22] Sections to be illuminated included the M6 between junctions 10 and 11, and between junctions 20 and 27.[22]

In March 2006, after 15 years of debate,[23] the government authorised the construction of a 6-mile (9.7 km) extension of the M6 from its then northern terminus near Carlisle to the Anglo-Scottish border at Gretna (the so-called "Cumberland Gap"), where it links into the existing A74(M).[24] The road opened on 5 December 2008, the 50th anniversary of the M6 Preston By-pass.[25] The project, which was a mixture of new road and upgrade of the existing A74, crosses the West Coast Main Line and had an estimated costs of £174 million. It completed an uninterrupted motorway from just south of Dunblane (via the M9, the recently opened M80 section near Cumbernauld and the M73) in the north to Exeter (via the M5) and to London (via both the M42/M40 and the M1) in the south.[26]

The M6 Toll, Britain's first toll motorway, which bypasses the West Midlands conurbation to the east and north of Birmingham and Walsall and was built to alleviate congestion through the West Midlands, and opened in December 2003. Before the opening of the toll motorway, this section of the M6 carried 180,000 vehicles per day at its busiest point near Wolverhampton (between the junctions with the M54 and M5 motorways), compared with a design capacity of only 72,000 vehicles. Usage, at about 50,000 vehicles, was lower than expected and traffic levels on the M6 were only slightly reduced as a result. The high toll prices, which were set by the operating company and over which the UK government has no influence until 2054, were blamed for the low usage.[27] Much traffic continues to use the M6 or the continued on the M1 and took the A50 or A52.[28] As of July 2012[update] the road between Junctions 3A and 11A now carries 120,000 motor vehicles every day.[29]

A proposed extension to the M6 Toll known as the 'M6 Expressway', which would have continued from the M6 Toll as far as Knutsford, at which point much of the existing M6 traffic leaves the M6 for Manchester, was abandoned in 2006 due to excessive costs, anticipated construction problems[30] and disappointing levels of use of the M6 Toll.

In October 2007, following a successful trial on the M42 in the West Midlands, the UK government have announced that two stretches of the M6 will be upgraded to allow the hard shoulder to be used as a normal running lane during busy conditions under a scheme called Active Traffic Management.[31] The two stretches, between junctions 4 and 5 and between junctions 10a and 8, are two of the busiest sections on the entire motorway.[32] The system could also be extended onto other stretches of the M6 as the government is going to undertake a feasibility study to determine other likely locations where this technology can be used.[33]

The government wishes to improve reliability and capacity between Junctions 11 by Cannock and Junction 19 near Knutsford. In 2004, it favoured a new motorway, 'The Expressway' following a roughly parallel course to the existing M6.[34][35] In July 2006, the government announced its decision to abandon the Expressway proposal, and favoured widening accompanied by demand-management measures,[30] and have launched a study to consider options for providing additional capacity.[36] The current proposal is in introduce managed motorway between Junction 13 and 19.[37]

The Highways Agency has developed proposals for a major upgrade to the overloaded Catthorpe Interchange where the M6, the M1 motorway and the A14 road meet at Catthorpe.[38]

Data from driver location signs are used to provide distance and carriageway identifier information. Where a junction spans several hundred metres (yards) and the start and end distances are known, both distances are shown.[39][40]