The M3 is a motorway that runs from Sunbury-on-Thames, Surrey, to Southampton, Hampshire, a distance of approximately 59 miles (95 km). Along with the A316, the M3 provides the main artery into South West London, as well as providing access to major towns and cities along its route, which include Winchester, Basingstoke, Southampton and the Aldershot Urban Area. From Junction 9 (A34) near Winchester, to Junction 14 (M27) on the northern fringe of Southampton, the M3 forms the southerly part of the unsigned E05. It was constructed as a dual three-lane motorway for most of its length, except for the two-lane section between Junctions 8 (A303) and 9. The motorway was opened in phases, with the first section (Junction 3 to 8) opening in 1971, and was eventually completed in 1995 upon the completion of the Junction 10 to 12 section. This faced widespread opposition due to the motorway being cut through the Twyford Down, numerous road protests were held during construction, which ultimately delayed its opening. Since then, the motorway has become a major artery to the South Coast, becoming a popular tourist route. As such the M3 faces regular delays and congestion on its busiest sections during rush hours and seasonal periods. The Junctions 2 to 4A section is currently being upgraded to a Smart Motorway, which will turn the hard shoulder into a fourth lane to provide extra capacity. 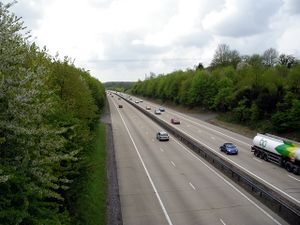 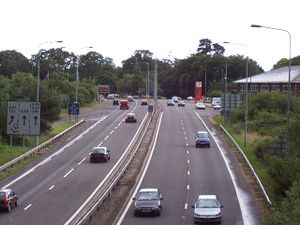 Southern end of the M3 motorway, meeting the A33 at Southampton 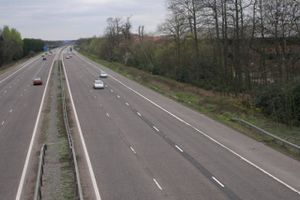 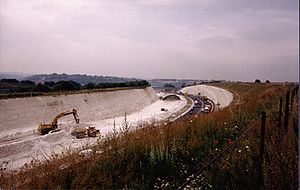 Originally approved as the "London to Basingstoke Motorway" with delays over funding for an extension to Southampton[1] the road was built to relieve two single carriageway trunk roads that were congested.[n 1][2]

In 1967, sections of the A33 road from Popham, Hampshire, to a northeastern point of the Winchester Bypass were widened to dual carriageways; this only partially alleviated growing congestion, especially in Winchester, which led to the southern phase gaining approval.[n 2][2]

The eastern section, from Sunbury-on-Thames in Surrey to Popham near Basingstoke opened in sections: first the Hampshire section in 1971, and then the Surrey section in 1974.[3] The cost for this first phase was £46m.[4] The completed road acts as a continuation of the A316 Country Way, an express three-lane road from Apex Corner, Hanworth, in Greater London to Sunbury-on-Thames.

A first public inquiry for the "M3 London to Basingstoke Motorway: Popham to Compton extension" centred on the section passing Winchester, and was held in 1971, after which the ministry was instructed to reconsider and reconsult on the proposals.[5][6] A second public inquiry was held in 1976–77.[7][8] The earlier decision to route the motorway through or alongside the water meadows between St Catherine’s Hill and the compact cathedral city was reopened, and during the year-long inquiry the headmaster of Winchester College was forcibly ejected along with others for causing a disturbance.[6]

The scope of the M3 extension was reduced to defer the difficult decision about the section around Winchester and it was built in two sections (from 'Popham to Bridget's Farm' and from 'Bridget's Farm to Bar End') in 1995.[3] When this opened, the temporary junction to the A33 parallel route was removed.

The section of the M3 from near Junction 12 (Eastleigh and Chandler's Ford) to the last, Junction 14 for the M27 replaced part of the A33 road which was upgraded to motorway standard and opened in 1991.[6]

The southern section starts as a continuation of a single-lane avenue, Bassett Avenue and The Avenue in the City of Southampton as the M27 motorway provides alternative routes from other parts of the city, particularly its waterfront and downtown peak-hour accessway, the M271 motorway and Mountbatten Way providing dual to three lane highways starting at the northwest of the city.

Its service station was envisaged at Basingstoke upon the motorway's completion but not built – superseded by one just north of Fleet and another north of Winchester.[10]

The M3 starts at Sunbury-on-Thames in Surrey on the edge of South West London as the continuation of the A316 which has three lanes each way from Hanworth in the London Borough of Hounslow, and two from Chiswick. The motorway 2 miles (3.2 km) after its start turns more west-southwest,[12] crosses the River Thames on the M3 Chertsey Bridge to the north of Chertsey and then has its second junction, at the M25 motorway, before continuing through the gorse, bogs and heather of the Surrey Heath. Its third junction is for Camberley, Bagshot, Bracknell, Ascot and Worplesdon. From Junction 4 it bisects the northern Blackwater Valley conurbation[n 3] then has its latest junction for Fleet and nearby early 21st century expanded/new villages[n 4], it crosses the South West Main Line, before skirting Old Basing and Basingstoke to its north[n 5]. Turning south west again, it passes Popham and, just before reaching Junction 8, where one lane becomes the A303 road, the motorway continues as a dual two lane road through open countryside and Micheldever Wood until it reaches the north of Winchester.

Taking over the "Winchester Bypass" the M3 resumes to three lanes each way at Junction 9, continues directly south and then takes a small curve around the east of the city running through a deep cutting in Twyford Down and then proceeding south west again, crossing the South West Main Line a second time alongside the River Itchen and through the Eastleigh urban-suburban area before crossing the Eastleigh to Romsey railway line and ending at the Chilworth Roundabout on the edge of Southampton.

In the early morning of 25 April 1999, the drum and bass DJ and record producer known as Kemistry was killed on the M3 near Winchester by the steel body of a cat's eye, which had been dislodged by a van and flew through the windscreen of the following car in which she was a passenger. The coroner recorded a verdict of accidental death.[15] A question was asked in the House of Lords about the safety of cat's eyes in light of the highly unusual incident, and Highways England conducted an investigation into the "long-term integrity and performance" of various types of road stud.[16]

On 1 April 2000, a zebra crossing was illegally painted across the northbound carriageway of the M3 between Junctions 4 and 4a.[17]