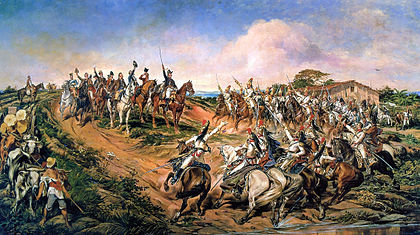 Independence or Death, famous painting from Pedro Américo that celebrates the Independence Day of Brazil. 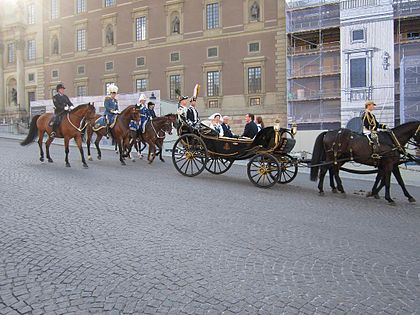 In monarchies (such as in Sweden, 6 June 2013) the head of state will often ride through the streets and greet citizens on National Day.

The National Day is a designated date on which celebrations mark the nationhood of a nation or non-sovereign country. This nationhood can be symbolized by the date of independence, of becoming a republic or a significant date for a patron saint or a ruler (birthday, accession, removal, etc.). Often the day is not called "National Day" but serves and can be considered as one. The National Day will often be a national holiday.

Most countries have a fixed date National Day, but some have movable dates. An example is Jamaica, which up to 1997 celebrated its National Day on the first Monday in August. This commemorated independence from the United Kingdom which was attained on Monday, 6 August 1962, the first Monday in August of that year. Israel's Independence Day is not fixed relative to the civil Gregorian calendar, being formally linked to 5 Iyar on the Jewish calendar, but may also be moved to any day between 3 and 6 Iyar in order to avoid preparing for or celebrating either Independence Day or Memorial Day (which immediately precedes Independence Day) on Shabbat; the practical effect of this is that Independence Day may be celebrated any day between 15 April and 15 May. Another example is Thailand which celebrates the birthday of the king on 5 December. This date will change on the accession of the heir to the throne.

Most national days can be categorized in two large blocks:

Denmark and the United Kingdom are among the few countries that do not have designated national days.

Importance attached to the National Day as well as the degree to which it is celebrated vary greatly from country to country. For example, Spain's National Day Fiesta Nacional de España is held on 12 October, the day celebrated in other countries as Columbus Day or Día de la Raza, and commemorates the anniversary of Christopher Columbus's arrival in the Americas.[1] A military parade is held in Madrid celebrating the occasion.[1] The National Day in France is 14 July and known as the Fête nationale (known outside France as Bastille Day) commemorating the Storming of the Bastille,[2] which is considered the start of the French Revolution.[3] It is widely celebrated and the French Tricolour is much in evidence, while the President of the Republic attends a military parade on the Champs-Élysées of Paris. In the United States, the Independence Day celebrations on 4 July are widely celebrated with parades, fireworks, picnics and barbecues. In Ireland, Saint Patrick's Day, 17 March, is the equivalent of a national day and has been a public holiday for many years. However, in the United Kingdom the constituent countries' patron saints' days are low-key affairs. In recent times campaigns have commenced to promote the National Days of England, Scotland and Wales, with St. Andrew's Day being designated as an official bank holiday when the Scottish Parliament passed the St Andrew's Day Bank Holiday (Scotland) Act 2007. A National Day for the United Kingdom has also been proposed in recent years. 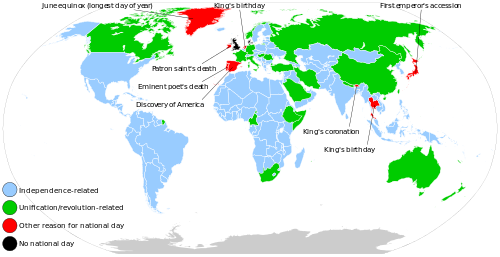 Map with reasons for national days

Regions that are not sovereign states or part of a federal system (shared sovereignty) are shown in pink.