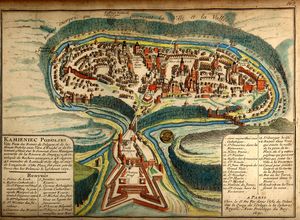 The Ottoman garrison in the city of Kamaniçe, capitol of the Podolia Eyalet.

In 1672 the Ottoman army, led by Sultan Mehmed IV, captured Kamaniçe after a short siege.[2] The Treaty of Buchach confirmed Ottoman control of the city, which became the centre of a new eyalet.[2] The treaty was repudiated by the Polish Diet, and war broke out anew.[2]

The Polish campaign proved unsuccessful, and the truce of Żurawno (1676) left Podolia within Ottoman borders. Another Polish-Ottoman war broke out again in 1683.[2] For the next 16 years, Ottoman rule in Podolia generally was limited to the blockaded fortress of Kamianets, held by a garrison of 6,000 soldiers.[2] The other garrisons in Podolia, in Bar, Medzhybizh, Jazlivec, and Chortkiv, barely exceeded 100 soldiers each.[3]

According to the Ottoman provincial budget of 1681, 13 million akçe were spent yearly in the eyalet, primarily for soldiers' pay. Of this amount, less than 3% was collected from Podolia itself, the rest was sent from the central treasury.[3] In 1681, the patriarch of Constantinople appointed the Orthodox metropolitan of Kamianets, named Pankratij.[4]

The fortress was returned to Poland as a result of the Treaty of Karlowitz (1699).[2]

During the 27 years of Ottoman rule, Podolia was administered by nine Ottoman pashas:[2]

The eyalet was divided into four sanjaks:[2]