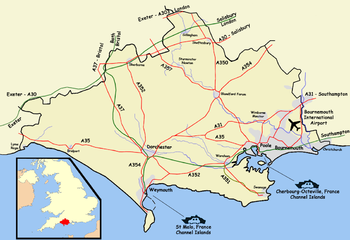 The main transport features in the county.

Dorset is a county in South West England. The county is largely rural and therefore does not have a dense transport network, and is one of the few English counties without a motorway. Due to its position on the English Channel coast, and its natural sheltered harbours, it has a maritime history, though lack of inland transport routes have led to the decline of its ports. 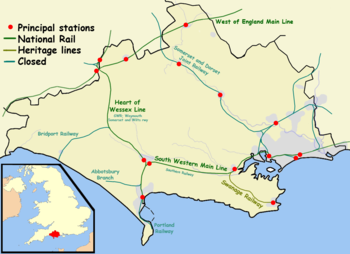 Dorset's railways, past and present.

Dorset is connected to London by two main railway lines. The West of England Main Line runs through the north of the county at Gillingham and Sherborne. The electric South Western Main Line runs through the south of the county, at Bournemouth, Poole, Dorchester and the terminus at Weymouth, and was part of the London and South Western Railway (later Southern Railway). Additionally, a secondary line, the Heart of Wessex Line runs from Weymouth to Bristol, via Yeovil and Bath, in Somerset. This line was part of the Wilts, Somerset and Weymouth Railway (later Great Western Railway).

Railway closures in Dorset began with the West Bay line south of Bridport in the 1930s. Then lost in the 1950s were the branch lines to Abbotsbury and Portland. The Beeching Axe of the 1960s led to the closure of other Dorset lines, the Lyme Regis and Bridport branches. The latter remained open until 1975 although the Beeching report was published in 1963. The biggest loss was the entire Somerset and Dorset Joint Railway, between Bournemouth and Bath. Through Dorset, this line roughly followed the Stour Valley, serving the market towns of Blandford Forum and Sturminster Newton in the Blackmore Vale, and is being converted into a long-distance trail for cyclists and walkers. Another through line, the Salisbury and Dorset Junction Railway, roughly followed the Avon Valley from Bournemouth to Salisbury. With the closure of the lines which terminated in Bournemouth, the terminus station in the town centre was also closed, leaving only the through stations. The station at Semley on the West of England Main Line also closed. As this had been the nearest station to Shaftesbury, travellers from that town would have to use Gillingham, on the same line. An oddity is the Swanage Branch. Although omitted from the Beeching plan this line closed in 1972 and most of the track was lifted. However it has now been rebuilt as a heritage railway.

Dorset is one of only five non metropolitan counties in England to not have a single motorway, however, two trunk road corridors run east-west through the county. In the north, the A303 London to Exeter and Cornwall road briefly enters the county, though for most of its route it is north of the borders with Somerset and Wiltshire. Further south, the A31, a continuation of the M27 motorway from Hampshire, serves as a northern bypass for the South East Dorset conurbation, merging into the A35 to continue west through the county, bypassing Dorchester and Bridport.

Several primary routes also run through the county. These are:

Other 'A' roads are:

The only passenger airport in the county is Bournemouth International Airport, and there are two passenger sea ports, at Poole and Weymouth.