During the American Civil War, transportation proved to be an integral part of military logistics through the organization of railroads as a viable and efficient means of military transportation. The US Army centralized the management of rail into the US Military Railroad (USMRR). The Army Quartermaster purchased eight city class iron clads on the Mississippi River in February 1862, a full month before the USS Monitor and CSS Virginia set sail. City Point, Virginia in 1864 would become the largest port operation in the Western Hemisphere in 1864. By 1864, five of the nine divisions in the Quartermaster Department dealt exclusively with transportation. A substantial number of battles were won because of the field commander's ability to swiftly and effectively move troops and supplies. Most wounded soldiers were carried away in a banana-shaped cart called a gondola.[2] See also United States Military Railroad.

During the Spanish–American War, the task of mobilizing and deploying a largely volunteer force to Cuba and the Philippines magnified the need for a separate transportation service within the Quartermaster Department. Army transporters worked with both the civilian railroads and the maritime industry to pull together a successful intermodal operation.[2] 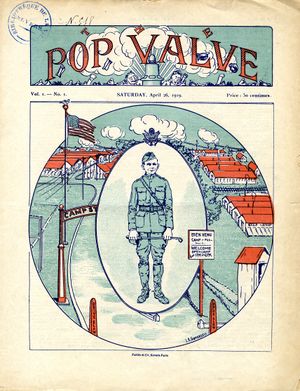 The Pop Valve a self-published magazine of the 19th Division while based at Nevers, France in WWI

The American Expeditionary Force that deployed to France during World War I, emphasized the need for a single transportation manager. William W. Atterbury, a former railroad executive, was appointed as the Director-General of Transportation and a separate Motor Transport Corps of the National Army was established to manage trucks on 15 August 1918. The United States Army School for Truck Drivers had been established by 9 July 1918;[3] and the Transportation Corps of the AEF was abolished after the war,[2] The M.T.C. subsequently conducted Transcontinental Motor Convoys in 1919 and 1920.

One of the greatest feats of the Transportation Corps, via the Military Railway Service, was the rebuilding of France's shattered railroad network after D-Day and the transportation of 1,500 locomotives and 20,000 railway cars specially built for the lighter French track system starting With D-Day +38. To speed the process, and avoid delays caused by French channel ports and docks destroyed by the retreating Germans, the Transportation Corps brought the heavy railroad stock across the channel and across the beaches in specially built LSTs.[5]

The Cold War between the United States and the Soviet Union extended from 1947 into 1991, spanning the Gulf War. When the Soviet Union cordoned off the city of Berlin in 1948, the Transportation Corps played a vital role in sustaining the city. Two years later, on 28 June 1950, President Harry S. Truman established the Transportation Corps as a permanent branch of the Army.[2]

The Vietnam War saw the most diversified assortment of transportation units ever assembled. For over a decade the Transportation Corps provided continuous support for American and allied forces through an unimproved tropical environment using watercraft, amphibians, motor trucks and Transportation Corps aircraft. The enemy threat to convoys required a unique solution - gun trucks.[2]

On 31 July 1986, the Transportation Corps was inducted into the U.S. Army Regimental System.

Operations in Somalia, Rwanda, Haiti, Bosnia, and Iraq have also seen the deployment of large numbers of transportation units.[2]

The 143rd Transportation Command opened the port and supported the push to Baghdad in March 2003. After Baghdad fell in April, the maneuver operation matured into a sustainment operation with a hub and spoke supply line. Once the enemy began attacking convoys, the truck drivers responded with an age old solution of hardening trucks with steel and adding machine guns thus making gun trucks and convoy security a permanent part of Transportation doctrine. No matter how great the threat, the Transportation Corps delivered the goods. During Operation New Dawn, the Transportation Corps was responsible for retrograding all the equipment out of Iraq by the December 2012 deadline.

According to a September 2010 article in the Army News Service, "The first students to attend classes at the new Fort Lee Transportation School will be those enrolled in the transportation management coordinator course - MOS 88N (Military Occupational Specialty). It is the only one of the seven transportation MOS-producing courses that will be taught at Fort Lee (the others are taught elsewhere)."[1] For example, Cargo Specialist (MOS 88H), Watercraft Operator (MOS 88K) and Watercraft Engineer (MOS 88L) training is conducted at Fort Eustis, Virginia, as Fort Eustis is the main housing of the Army's Watercraft. Motor Transportation Operator (truck driver, MOS 88M) training is conducted at Fort Leonard Wood, Missouri. Railway training for Army Reserve soldiers (MOSs 88P, 88T, and 88U) and Army civilian employees has remained at Fort Eustis, as there are only warehouse tracks and no railway system available for training at Fort Lee.