From Infogalactic: the planetary knowledge core
Jump to: navigation, search
Not to be confused with Warren, New York.

Warren County is a county in the U.S. state of New York. As of the 2010 census, the population was 65,707.[1] The county seat is Queensbury.[2] The county is named in honor of General Joseph Warren, an American Revolutionary War hero of the Battle of Bunker Hill.[3]

When counties were established in New York State in 1683, the present Warren County was part of Albany County. The county was enormous, covering the northern part of New York State, all of the present State of Vermont, and, in theory, extended westward to the Pacific Ocean. It was reduced in size on July 3, 1766 by the creation of Cumberland County, and further on March 16, 1770 by the creation of Gloucester County, both containing territory now in Vermont. On March 12, 1772, what was left of Albany County was split into three parts, one remaining under the name Albany County. One of the other pieces, Charlotte County (named for Charlotte of Mecklenburg-Strelitz, queen-consort of King George the Third of England), contained the eastern portion.

In 1778, the name Charlotte County was changed to Washington County to honor George Washington, the American Revolutionary War general and later President of the United States of America.

In 1813, Warren County was split off from Washington County, receiving its name in honor of General Joseph Warren. County officials first met in the Lake George Coffee House in the hamlet of Caldwell (known today as Lake George Village). James Caldwell, a patenee of the Town of Caldwell, donated land within the hamlet to serve as the county seat beginning in 1819.[3]

Lake George is the site of a YMCA conference center, the Silver Bay YMCA, founded in 1900 and one of only a few of its type in the United States .[4] The Silver Bay Inn was built in 1904 and is on the National Register of Historic Places.[5]

In 1963, the courthouse in Lake George village was closed and operations moved several miles south to its present-day location at the Warren County Municipal Center main campus in Queensbury.[6][7]

Warren County is situated in the eastern portion of New York state; the eastern border is Washington County. Being located in the Adirondack Mountains, it is not uncommon for mountain peaks to surpass 2,000 feet (610 m). The highest peak in the county is Gore Mountain at an elevation of 3,198 feet (975 m).[9]

The climate of Warren County is humid continental, as is most of New York State.[10] In the winter, bouts of cold, dry air arrive from Canada, and interior sections of North America.[10] In the summer, the Gulf Stream can bring days of hot, moist, humid air to the county.[10] Extratropical storms often affect the county; in the winter, Nor'easters bring heavy snow and rain, and sometimes high wind. Fall and spring are generally relatively mild and pleasant, with fall foliage regarded as some of the most stunning in the country. In the summer and fall, back door cold fronts move in from the north and bring thunderstorms, sometimes severe.[10] 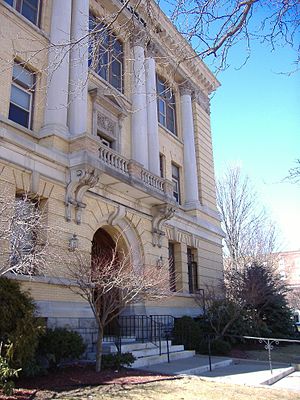 Warren County has 20 county supervisors,[19] which represent 11 of the county's towns and the City of Glens Falls:[20]

The current Warren County sheriff is Nathan H. York.[21] The sheriff's office is structured around three divisions; Administrative Services, Law Enforcement and Correction. The Law Enforcement Division includes both Investigative Services, Patrol Services and the Communications Center. Patrol Services have specialized units that operate under the control of the Division Commander.[21] The sheriff's office provides boat patrols on Lake George and Schroon Lake.[22]

Democrats have been steadily making inroads in recent years; Senator Charles Schumer won the county by 56% in his re-election bid in 2004, and the Democrats recently gained a majority on the Glens Falls City Council. John Hall, a Democrat, picked up the county judgeship position in 2003. In 2006 Republican John E. Sweeney was unseated in the district by Kirsten Gillibrand as Member of Congress.[20] In 2009 Congresswoman Kirsten Gillibrand was selected by Governor David Paterson to replace Hillary Clinton as New York's junior Senator. Democrat Scott Murphy was elected to replace Gillibrand in a special election for the NY 20th congressional district.

The county contains the highest concentrated area of medical manufacturers in New York state, with many medical inventions originating in the county.[25] Norman Jekyll and David Sheridan introduced the medical device industry to the Glens Falls area. In the 1940s, they produced products that were from materials supplied by war-torn Europe. One of the primary manufacturers is AngioDynamics Inc., which is located in Queensbury, and is a producer of medical devices used in minimally invasive, image-guided procedures to treat peripheral vascular disease.[25] Another major manufacturer of medical devices is Boston Scientific Corp., which is located in Glens Falls.[25]

Adirondack Community College (ACC) is the site of post-secondary education in Warren County. Located in Queensbury, the college provides an extensive program of degrees and certificate programs.[20] SUNY Plattsburgh, based in Clinton County, offers bachelor and master-degree programs at the ACC campus.[33]

The primary healthcare center in Warren County is the Glens Falls Hospital, which is located in Glens Falls. Providing 410 beds, its most common procedure is miscellaneous diagnostic and therapeutic procedures.[34]

Regular bus service from Queensbury to Glens Falls is provided by the Greater Glens Falls Transit System. These also include trolleys that run on the road. The trolleys go from Bolton Landing (four times a day) and usually turn around just north of Hearthstone Point Campground on Route 9N.[35]

There are several state and county maintained roads in Warren County, making up a total of 464.7 miles (747.9 km) of roadway.[36] The only U.S. Route is U.S. Route 9, which traverses the eastern portion of the county. The only interstate is Interstate 87, also known as the Adirondack Northway.[37]

View of Route 9N from the North End Trailhead 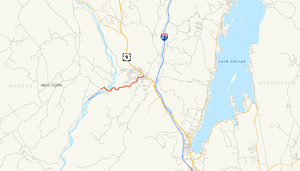 Amtrak serves Glens Falls on its Adirondack and Ethan Allen Express daily routes, which allow easy access to Montréal, Albany, New York City, and Rutland, Vermont, among many other towns and cities.[35]

Warren County is home to several music centers, including the Luzerne Music Center, which is a summer camp focused on teaching music, in the foothills of the Adirondacks. In July, it holds an annual Chamber Music Festival which is open for public viewing.[41] The Upper Hudson Musical Arts is also a popular attraction, bringing concerts by professional chamber music ensembles and soloists to the Adirondacks throughout the year. Concerts are held at the Tannery Pond Community Center in North Creek.[41] In addition, the Charles R. Wood Theater home to Adirondack Theatre Festival is a year-round professional theater production in Glens Falls.[42]

In Warren County, New York on Lake George at Bolton Landing, Golden Heart Farm art colony the summer residence of Thomas and Wilhelmina Weber Furlong of the Art Students League of New York opened in the summer of 1921. The historically important art colony and artists in residence program were at the center of the American modernist movement as important artists like David Smith, John Graham, and Dorothy Dehner from Manhattan traveled to Warren County to escape the city and study with the couple[43] A New York State historic marker was placed for the Warren County Bicentennial honoring Weber Furlong On July 23, 2013 at City Hall in Glens Falls.[44] 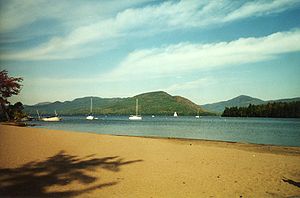 Warren County is the primary area of tourism related to Lake George. Lake George is a 28,160-acre (114.0 km2) lake located in the Adirondack Mountains. Popular activities on the lake include river tubing, swimming, kayaking and boating.[45] There are several large points of interest in the Lake George region. These include Prospect Mountain just outside town, Steel Pier along Beach Road which serves several tour boats.[46] The village is a popular tourist spot and is home to many stores and novelty shops. There is the Lake George Battleground on the edge of the village along County Route 6.[47]

To the north, there are several hotels and motels to serve tourists visiting the lake. There are several campgrounds around the region including Hearthstone Point on Route 9N and Lake George Battleground south of the village.[47] There are also several campgrounds on islands on the lake. These include Long Island, which serves 88 campsites.[48] All island campgrounds and land-locked grounds are maintained by the New York Department of Environmental Conservation.[48] 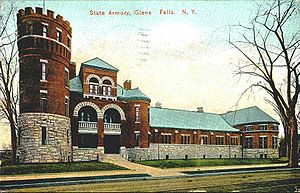 State Armory in Glens Falls in 1907

One of the premiere historic sites in Warren County is the Fredella, Joseph J., House and Garage, which was constructed in 1900, and is significant for its architectural detail. It is on the list of National Register of Historic Places.[49] Another popular historic site is the Wreck of the 1758 radeau LAND TORTOISE, a shipwreck site which occurred in 1758 of European-American origin. Other historic sites include:[49] 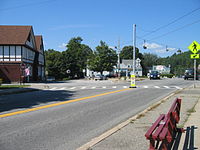 Hamlet of Chestertown in Chester, typical for the area.