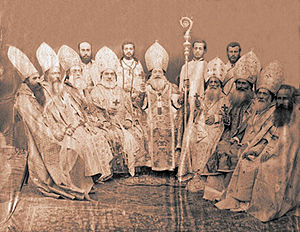 Bishops meeting in Jerusalem, circa 1880 (note the Roman pallium worn by the archbishop in the centre).

After the Armenian Apostolic Church formally broke off communion from the Chalcedonian churches in the 5th century, some Armenian bishops and congregations made attempts to restore communion with the Catholic Church. During the Crusades, the church of the Armenian kingdom of Cilicia entered into a union with the Catholic Church, an attempt that did not last. The union was later re-established during the Council of Florence in 1439, but did not have any real effects for centuries.

The Armenian Catholic community was also previously formed by Armenians living in Poland in 1630s after the union by the Armenian bishop of Leopolis - Nicholas (Polish: Mikołaj) Torosowicz, who established bonds with the Roman Catholic Church. The community which had been historically centered in Galicia as well as in the pre-1939 Polish borderlands in the east, was after World War II expelled to present-day Poland and now has three parishes: in Gdańsk, in Gliwice and in Warsaw.

Armenian Catholics originated in what is today Armenia, Georgia and Eastern Europe. Beginning in the late 1920s, persecution caused many Armenian Catholics to emigrate. In 1991, after the fall of the Soviet Union, the Bishop of Rome, Pope John Paul II merged the communities in Georgia and Russia with those in Armenia, creating a new ordinariate of Armenia and Eastern Europe, with its residence in Gyumri. The city was not chosen by chance. Most of the Catholic Armenians live in the northern parts of the Armenia. This has become a kind of basis for fence-mending with the coreligionists on the other side of the border.

Today Catholic Armenians of Samtskhe-Javakhq live together in Akhaltsikhe and in the nearby villages, as well as in the regions of Akhalkalak and Ninotsminda. The communities of the last two regions, which are mainly rural, are on rather distant territories, but the most important interlink is the historical memory about Catholicism.

A small seminary was established in Gyumri, Armenia, during 1994; there candidates for the Priesthood engage in basic studies before moving to the Pontifical College of the Armenians (established 1885) in Rome where they pursue philosophy and theology.

Presently, around 1.5 million Armenians live in North America, of which 35,000 belong to the Armenian Catholic Church.

In the 19th century Catholic Armenians from Western Armenia, mainly from the towns and cities of Karin (Erzurum), Constantinople, Mardin etc., came to the United States seeking employment. At the end of the same century, many survivors of the Hamidian Massacres had concentrated in several U.S. cities, chiefly in New York. Catholic Armenian communities were also founded in New Jersey, Boston, Detroit, Los Angeles, and other cities of California.

Many Armenians came to the United States and Canada from the Middle Eastern countries of Lebanon and Syria in the 1970s and in later years. Also many Armenians immigrated from Argentina, because of the economic crisis. At the same time, many Catholic Armenians inside the United States moved to San Francisco, San Diego, Chicago, Washington D.C., Atlanta, Miami and Indianapolis.

In 2005, by Pope Benedict XVI's decision, the Catholic Exarchate of the USA and Canada was advanced to the status of a diocese. It serviced 35,000 Catholic Armenians in the United States and some 10,000 in Canada. The bishop, or eparch, of the diocese, which has jurisdiction over Canadian and American Catholics who are members of the Armenian Catholic Church, became Manuel Batakian. According to a Monday, May 23, 2011 news release by the United States Conference of Catholic Bishops, Pope Benedict XVI, named Archpriest Mikael Mouradian, superior of the Convent of Notre Dame in Bzommar, Lebanon, as the new bishop of the Eparchy of Our Lady of Nareg in New York for Armenian Catholics. The appointment of Lebanon-born Bishop Mouradian was publicized in Washington, May 21, by Archbishop Pietro Sambi, Apostolic Nuncio to the United States.[2]

Next to North America, France holds the largest number of Armenian Catholics outside of the areas of the Middle East and Oriental Europe. The Eparchy of Sainte-Croix-de-Paris was established in 1960 with Bishop Garabed Armadouni as exarch. Since 1977, the eparchy has been led by Bishop Krikor Gabroyan.

There are some 30,000 Armenian Catholics in the eparchy, the headquarters of which is in Paris. The eparchy has six churches apart from the Cathedral of the Holy Cross in Paris: Arnouville-lès-Gonesse, Lyon, Marseille, Saint-Chamond, Sèvres and Valence. A community of Mekhitarist Fathers resides in Sevre and a convent of Armenian Sisters of the Immaculate Conception runs a school in Marseille 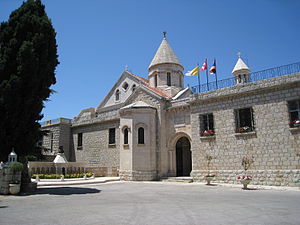 Headquarters of the Armenian Catholic Patriarchate in Bzoummar, Lebanon 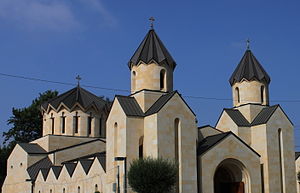 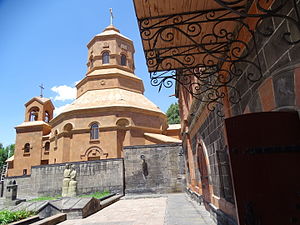 Cathedral of the Holy Cross in Gyumri, Armenia

The Armenian Catholic Church is broken into Archdioceses, Eparchies, Apostolic Exarchates, Ordinariates for the Faithful of the Eastern Rite and Patriarchal Exarchates, each of which have functions similar to a diocese.

Following is a list of the jurisdictions with their number of adherents.[8]

The Armenian Catholic Church produces a number of publications:

The Armenian Catholic Church has presses that publish many liturgical, spiritual books, publications, pamphlets and translations from general Catholic publications.