The Bagratuni or Bagratid (Armenian: Բագրատունի) royal dynasty was a royal family of Armenia that formerly ruled many regional polities of the medieval Kingdom of Armenia, such as Syunik, Lori, Vaspurakan, Vanand, Taron, and Tayk until the 8th century.[1]

The Bagratid family first emerged as nakharars, members of the hereditary nobility of Armenia. Their holdings were in the region of İspir, in the Çoruh River valley. As early as 288-301, the Bagratid prince Smbat held the hereditary Armenian titles of Aspet, which means Master of the Horse, and T'agatir, which means Coronant of the King.[2]

According to Prince Cyril Toumanoff, the earliest Bagratid prince was chronicled as early as 314 AD. In the 8th century, Smbat VII Bagratuni revolted against the Abbasid Caliphate but the revolt was defeated.

The Bagratid Princes of Armenia are known as early as 1st century BC when they served under the Artaxiad Dynasty. Unlike most noble families of Armenia they held only strips of land, as opposed to the Mamikonians, who held a unified land territory. These are the earliest Bagratid princes in Armenia prior to the establishment of the kingdom, as mentioned by the Union of Armenian Noblemen. Ashot I was the first Bagratid King, the founder of the Royal dynasty. He was recognized as prince of princes by the court at Baghdad in 861, which provoked war with local Arab emirs. Ashot won the war, and was recognized as King of the Armenians by Baghdad in 885. Recognition from Constantinople followed in 886. In an effort to unify the Armenian nation under one flag, the Bagratids subjugated other Armenian noble families through conquests and fragile marriage alliances. Eventually, some noble families such as the Artsrunis and the Siunis broke off from the central Bagratid authority.[3] Ashot III the Merciful transferred their capital to the city of Ani, now famous for its ruins. They kept power by playing off the competition between the Byzantine Empire and the Arabs.

They assumed the Persian-influenced titles of the King of Kings. However, with the start of the 10th century and on, the Bagratunis broke up into different branches, breaking up the unified kingdom in a time when unity was needed in the face of Seljuk and Byzantine pressure. The rule of the Ani branch ended in 1045 with the conquest of Ani by the Byzantines. 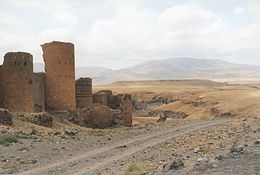 The Walls of Ani

The Kars branch held on until 1064. The dynasty of Cilician Armenia is believed to be a branch of the Bagratids, later took the throne of an Armenian Kingdom in Cilicia. The founder, Ruben I, had an unknown relationship to the exiled king Gagik II. He was either a younger family member or kinsman. Ashot, son of Hovhannes (son of Gagik II), was later governor of Ani under the Shaddadid dynasty.