Arno's Grove house in 1816, after which the area was named. 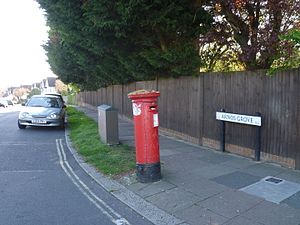 The northern end of Arnos Grove where it joins The Green, Southgate. 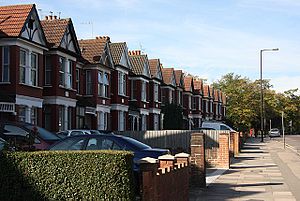 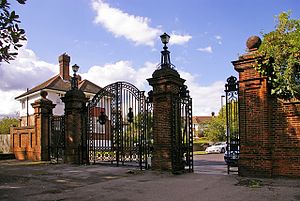 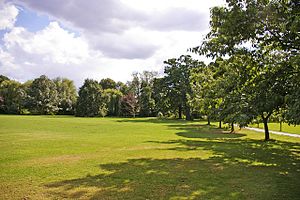 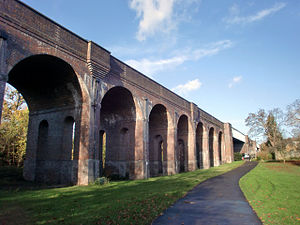 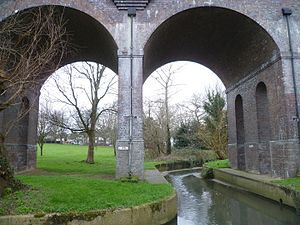 Pymme's Brook runs through Arnos Park and under the railway viaduct. 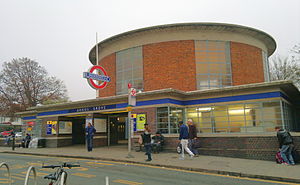 Arnos Grove /ˈɑːrnɒs ɡroʊv/[1] is an area in the south west corner of the London Borough of Enfield, England.

It is close to Enfield's borders with two other boroughs: Barnet and Haringey. Arnos Grove was previously considered part of Southgate, and then New Southgate.

The area's name derives from that of an estate called Arnoldes Grove or Arno's Grove, i.e. 'grove or copse of the Arnold family'. The Arnolds were local landowners who are mentioned in documents dating from the 14th century.[2]

Until the 1930s Arnos Grove was largely undeveloped and rural, and not considered to be an area in its own right. Instead, it was considered to be part of Southgate, although in the late 19th century the area of Colney Hatch (which later became known as New Southgate) began to grow nearby.

Arnos Grove was, until the dissolution of the monasteries by Henry VIII, owned by the Nuns of Clerkenwell.[3] It was known as Armholt Wood in the 14th century, and later as Arnolds. A Tudor manor house was erected on the site, but was demolished in 1719 – presumably by James Colebrook, who bought the estate in the same year and built a mansion called Arnolds in Cannon Hill, Southgate. Locals called the estate Arno’s and the next owner, Sir William Mayne (later Lord Newhaven), renamed the house and estate Arnos Grove, which is now pronounced as though it never had an apostrophe.[4] In 1777, it was bought by Isaac Walker.[5]

The mansion was described in 1821 by Edward Mogg in Paterson's Roads as:

containing many apartments, equally conspicuous for size, elegance, and that air of close domestic comfort so extremely desirable in the ever-varying climate of this country; these were highly adorned by the refined taste and liberality of the late proprietor [Mr Walker] and exhibit, besides a select and valuable collection of paintings, numerous Etruscan vases and other antiquities from Herculaneum and Pompeii, about 4000 specimens of choice minerals, scientifically arranged, and a beautiful cabinet of maple-wood, in which there is a vast number of scarce and estimable shells. The paintings of the staircase, executed by Lanscroon, a pupil of Verrio, in 1723, and representing the triumphal entry of Julius Caesar into Rome, and the apotheosis of that hero, are in good preservation, and may be considered, with the exception of those in the royal palaces, the best staircase decorations now remaining in Middlesex. Several of the principal apartments are fitted up in a costly but delicate style; there is a fine chimneypiece of Sicilian jasper in the dining room, which was executed in Italy, and comprises a beautiful mask of Apollo, in statuary marble; the chimneypiece of the drawing room is likewise of Sicilian jasper, and this apartment is adorned with pillars and pilasters, imitative of the same material.

The estate was owned from 1777 to 1918 by Walkers of the Taylor Walker brewing family (including the Walkers of Southgate), who bought the nearby Minchenden estate to increase the area of Arnos Grove to over 300 acres (1.2 km2). The New River loop ran through the Arnos Grove estate until the nineteenth century. The estate was then purchased from the last of the Walker brothers by Lord Inverforth who sold the southernmost 44 acres (180,000 m2) to the Southgate Urban District Council, which created Arnos Park in 1928, and property developers.[7]

The Arnos Grove mansion was also sold in 1928 to the North Metropolitan Electricity Supply Company. The mansion was subsequently enlarged, with an extension to the south in 1929 followed by one at the north end of the house in 1935, resulting in loss of the portico facing Southgate Green,[8] and encased in red brick. The house was sold to Legal & General in 1975 and renamed Southgate House.[8] In 1997-8 the bulk of the property was converted into a residential care home called Southgate Beaumont[4] with the southern part developed into luxury apartments.[8]

The southward expansion of Arnos Grove, which was initiated by the bias of facilities to the south of the original estate, was aided by the destruction of parts of New Southgate during World War II. There is now an almost continuous line of shops between Arnos Grove and New Southgate, via Betstyle Circus, making the areas closely linked. Today, seven bus routes (the 34, 184, 232, 251, 298, 382, and N91[10]) link Arnos Grove and New Southgate stations. The nearby Colney Hatch Lunatic Asylum has been redeveloped as Princess Park Manor, a residential development incorporating a health and fitness complex.

One of the main features of Arnos Grove is Arnos Park (44 acres or 18ha in size[7]). Arnos Park is a remnant of the Arnos Grove estate, and was opened in 1928 after having been purchased by Southgate Council.[7] The Pymmes Brook flows through the park, which contains diverse woodland but is mostly grassy fields. A large brick viaduct, with 34 numbered arches,[11] carries the Piccadilly line beyond Arnos Grove tube station towards Southgate through the western end of the park.[12] The park contains a large playground for children as well as several tennis courts. The Pymmes Brook Trail passes through the park. Also, evidence of the abandoned New River loop can be found within the trees in the north side of the park.[13]

Our Lady of Lourdes is a Roman Catholic Church. The Parish was established in the Diocese of Westminster in 1923, and mass was said in the presbytery until the church was built in 1935. Our Lady of Lourdes Roman Catholic Primary School was built in 1972 on the land owned by the Church to provide an education for the children of the parish.[14] Fr. Biju John was recently in residence[15]

St. Paul's, in Woodland Road, is the Anglican parish church of New Southgate and was consecrated in 1873. The building was designed by Sir George Gilbert Scott in the Early English style. It consists of chancel with north and south chapels and south bell turret and aisled nave. The fabric, which was severely damaged by bombing in 1944, was restored by R. S. Morris by 1957.

Arnos Grove is near the A406 road (North Circular) between Palmers Green and Bounds Green. The junction most commonly associated with Arnos Grove is a crossroads between Bowes Road, Wilmer Way and Telford Road. This is one of the few junctions on the A406 road that the A406 road does not run straight through or under.

The following stations are in the area: