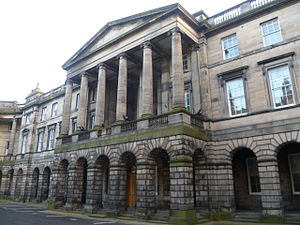 Entrance to the Parliament House, the home of the Supreme Courts of Scotland, in Parliament Square, Edinburgh.

The Court of the Lord Lyon is the heraldic court and the Scottish Land Court deals with agricultural and crofting issues.

Defunct courts include the Court of Exchequer and the Admiralty Court.

The United Kingdom does not have a single judicial system — England and Wales have one system, Scotland another, and Northern Ireland a third. The Military Court Service has jurisdiction over all members of the armed forces of the United Kingdom in relation to offences against military law. The Supreme Court of the United Kingdom operates across all three separate jurisdictions, hearing some civil - but not criminal - appeals in Scottish cases, and determining certain devolution and human rights issues.

The Supreme Court was created on 1 October 2009 by the Constitutional Reform Act 2005. It is the highest civil court of appeal for Scotland. It hears appeals from all the civil courts of the United Kingdom, and the criminal courts of England and Wales and of Northern Ireland.

Until the creation of the Supreme Court, ultimate appeal lay to the House of Lords, a chamber of the Parliament of the United Kingdom (though in modern practice only the Law Lords sitting in the Appellate Committee, rather than the whole House, heard appeals).

On 1 October 2009 the Supreme Court took over the judicial functions of the House of Lords and the work and the devolution jurisdiction originally vested in the Judicial Committee of the Privy Council.[1][2]

Cases involving "devolution issues" arising under the Scotland Act 1998, such as disputes regarding the validity of Acts of the Scottish Parliament or executive functions of the Scottish Government, are heard by the Supreme Court. The cases may reach the Court as follows: 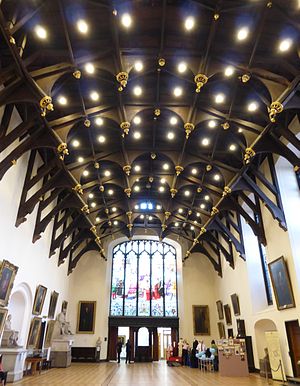 The Sheriff Appeal Court is a national court with a jurisdiction over civil appeals from the Sheriff Courts.

The Sheriff Appeal Court (SAC) was established on 22 September 2015, as part of Lord Gill’s Scottish Civil Courts Reforms, but will initially deal with criminal appeals, as the Court is expected to hear civil appeals from early 2016.[3]

Any final decision of a Sheriff may be appealed against. There is a right of appeal in civil cases to the Sheriff Principal, and in most cases onwards to the Court of Session.

The High Court of Justiciary is the supreme criminal court.

There is no further appeal from the High Court's decision on appeal, in contrast to the Court of Session, from which it is possible to appeal to the Supreme Court of the United Kingdom, the highest court. Appeals under the Human Rights Act 1998 and devolution appeals under the Scotland Act 1998 are heard by the UK Supreme Court (formerly the Judicial Committee of the Privy Council).

The Sheriff Appeal Court is a national court with a jurisdiction over summary criminal appeals from the Sheriff Courts and Justice of the Peace Courts. The Sheriff Appeal Court (SAC) was established on 22 September 2015, as part of Lord Gill’s Scottish Civil Courts Reforms, to deal with criminal appeals. [4] It hears appeals against summary criminal proceedings from both the sheriff and justice of the peace courts. The Bench generally comprises two or three appeal sheriffs depending on the type of appeal to be considered. The Court also hears appeals against bail decisions made by a sheriff or a justice of the peace. These hearings are presided over by a single appeal sheriff. The criminal Court sits in the courthouse at Lawnmarket, Edinburgh, and will initially sit on two consecutive days each fortnight. Substantive criminal appeals will be heard on Tuesdays and appeals against sentence on Wednesdays.[5]

an example of a sheriff court in Kirkcaldy

A higher sentence in solemn cases may be imposed upon reference to the High Court of Justiciary.

Justice of the Peace Courts

The Justice of the Peace Court is a criminal court which sits locally under summary procedure, where the Justice sits alone or in some areas as a bench of three. Justices are lay magistrates who as advised by a legally qualified clerk, known as the legal adviser. The court handles a variety of minor common law crimes such as breach of the peace, theft and assault, as well as statutory offences such as vandalism, road traffic offences and other public order offences. The maximum penalty which can be imposed at this level is 60 days' imprisonment or a fine up to £2,500.

Tribunals sit in judgement over a number of specialist areas, and frequently have appeals tribunals above them. For example, the Employment Tribunals (appeals to Employment Appeals Tribunal), VAT Tribunals, Lands Tribunal for Scotland, etc.

In many cases there is a statutory right of appeal from a tribunal to a particular court or specially constituted appellate tribunal, for example Employment Tribunal cases are appealed to the Employment Appeals Tribunal, which in turn allows appeals to the Court of Session. In the absence of a specific appeals court, the only remedy from a decision of a Tribunal is by judicial review in the Court of Session, which will often be more limited in scope than an appeal.

The specialist system of Children's Hearings handles the majority of cases involving allegations of criminal conduct involving persons under 16 in Scotland. These tribunals have wide ranging powers to issue supervision orders for the person referred to them by the Scottish Children's Reporter Administration. Serious crimes, at the direction of the Procurator Fiscal, are still dealt with in the usual criminal courts.

Court of the Lord Lyon

The Court of the Lord Lyon, the standing court of heraldry and genealogy, is responsible for civil and criminal enforcement of armorial bearings and the right to use certain titles. It is headed by the Lord Lyon, who is King of Arms and senior herald for Scotland.

Relationship with the European Court of Justice

As in all other courts in the EU, there is no right to appeal at any stage to the European Court of Justice (ECJ). Any court may refer a particular point of law relating to European Union law to the ECJ for determination. However, once the ECJ has given its interpretation, the case is referred back to the court that referred it. This is symptomatic of the fact that although the European Union is increasingly federal, there is no federal court system, just laws that must be interpreted the same way across all member states.

Relationship with the European Court of Human Rights

It is not possible to appeal the decision to the European Court of Human Rights (ECtHR). Although it is frequent to hear media references to an "appeal" being taken "to Europe", what actually takes place is rather different.

The ECtHR is an international court that hears complaints concerning breaches of the European Convention on Human Rights and Fundamental Freedoms. An unsatisfied litigant might complain to the ECtHR that Scots law has violated their rights and demand just satisfaction. A decision in the ECtHR will not change their rights under Scots law, and it is up to the various domestic legislative and executive bodies to decide what action (if any) to take after an adverse finding.

Furthermore, courts are not bound to follow a decision of the ECtHR, although they should "take into account" ECtHR jurisprudence when deciding a claim under the Scotland Act 1998. The Act requires Acts of the Scottish Parliament and actions of the Scottish Ministers to be compatible with the European Convention on Human Rights, and does so in a way which gives courts greater control than they have over UK Acts of Parliament as provided for by the Human Rights Act 1998.