From Infogalactic: the planetary knowledge core
Jump to: navigation, search
For other uses, see Department (disambiguation). 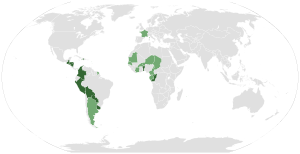 Map showing countries in the world that have departments as administrative subdivisions .
As first level
As second level

As a territorial unit, "department" was first used by the French Revolutionary governments, apparently to emphasize that each territory was simply an administrative sub-division of the united sovereign nation. (The term "department", in other contexts, means an administrative sub-division of a larger organization.) This attempt to de-emphasize local political identity contrasts strongly with countries which are divided into "states" (implying local sovereignty).

The division of France into departments was a project particularly identified with the French revolutionary leader the Abbé Sieyès, although it had already been frequently discussed and written about by many politicians and thinkers. The earliest known suggestion of it is from 1764 in the writings of d'Argenson.

Today, departments may exist either with or without a representative assembly and executive head depending upon the countries' constitutional and administrative structure.

The United States used this designation for the "Department of Alaska" during the early period of US rule in Alaska.