Formula One tyres play a significant role in the performance of a Formula One car. The tyres have undergone major changes throughout the history of Formula One, with different manufacturers and specifications used in the sport.

Formula One tyres bear only a superficial resemblance to a normal road tyre. Whereas the latter has a useful life of up to 80,000 km, the tyres used in Formula One are built to last less than one race distance. The purpose of the tyre determines the compound of the rubber to be used. In 2005, tyre changes were disallowed in Formula One, therefore the compounds were harder as the tyres had to last the full race distance (around 300 km). Tyre changes were re-instated in 2006, following the dramatic and highly political 2005 United States Grand Prix. 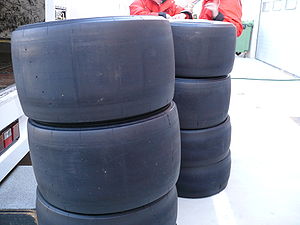 Reintroduced for the 2009 season, a set of slick F1 tyres.

In 1998 grooved tyres were introduced with three grooves in the front tyres and four grooves in the rear tyres.[1] Between 1999 and 2008, regulations required the tyres to feature a minimum of four grooves in them, with the intention of slowing the cars down (a slick tyre, with no indentations, is best in dry conditions). They could be no wider than 355 mm and 380 mm at the front and rear respectively and the maximum diameter was 660 mm (670 mm for wet tyre).[2] Slick tyres were reintroduced at the beginning of 2009, along with aerodynamic changes intended to shift the balance towards mechanical grip in an attempt to increase overtaking.

For 2007, Bridgestone became the sole tyre supplier in Formula One with the withdrawal of Michelin, and introduced four compounds of tyre, two of which are made available at each race. The harder tyre (referred to as the "prime" tyre) and is more durable but gives less grip, and the softer tyre (referred to as the "option" tyre) gives more grip but is less durable. Both compounds have to be used by each car during a race and the softer tyre had a painted white stripe in the second groove to distinguish between compounds. This was introduced after the first race of the season when confusion occurred because a small dot was put on the sidewall of the tyre, instead of the white stripe. Upon the reintroduction of slicks in 2009, the sidewalls of the softer tyres were painted green to indicate the difference in compound, as there were no longer any grooves in tyres. Each team must use each specification during the race, unless wet or intermediate tyres are used during the race, in which case this rule no longer applies.

In extremely wet weather, such as that seen in the 2007 European Grand Prix, the F1 cars are unable to keep up with the safety car in deep standing water due to the risk of aquaplaning. In very wet races such as the 2011 Canadian Grand Prix, the tyres are unable to provide a safe race due to the amount of water, and so the race can be red flagged. The race is either then stopped permanently, or suspended for any period of time until the cars can race safely again.

On 2 November 2009, Bridgestone announced their withdrawal from Formula One at the end of the 2010 season.[3][4] Michelin, Cooper Avon and Pirelli showed interest in taking over the role of tyre supplier. In June 2010, it was announced that Pirelli would be the sole tyre supplier for 2011 and would receive a three-year contract.[5] During August 2010, Pirelli commenced its test programme with the Toyota TF109 at the Mugello Circuit with Nick Heidfeld as the test driver.[6]

At the 2011 Malaysian Grand Prix, Pirelli introduced a coloured band around the outside of the tyre on the softer of the two dry compounds. This was due to confusion during the first round of the season. This measure was said to be a stop gap, with a permanent solution due to be implemented at the first European race of the season. The coloured line featured at the Chinese Grand Prix too.[8] From the Turkish Grand Prix, the permanent solution was implemented; the option compound had a new marking.[9] The option tyre had two thick coloured lines between the Pirelli and P Zero logos of each tyre, which made it easier to see the colour of the marking when the tyre rotates. The prime tyre remained the same markings as previously, though later in the season had the sidewall updated with the new markings.

According to regulations, at least two different compounds must be used in a dry race, failing which a driver will be disqualified. If a race is suspended without both tyres being used, a 30-second penalty will be imposed. This requirement is waived should drivers need to use wet weather tyres.[10]

On Friday, 17 June 2005, during the afternoon's practice session, Ralf Schumacher, who was driving for Toyota, crashed heavily in Turn 13 of the Indianapolis Motor Speedway road course, apparently as a result of a left-rear tyre failure. Turn 13 on the Indianapolis Motor Speedway road course is a high-speed banked turn (it is turn one of the oval run in the opposite direction), unique to Formula One racing, that causes a greater than usual lateral (horizontal) load.[11] This pressure can cause the side walls of the tyre to bow and wear in abnormal places.[12]

The 2005 United States Grand Prix was plagued by tyre issues. This caused the race to be run with only six competitors

The following day, Michelin reported that the tyres it had provided for its seven customer teams – BAR, McLaren, Red Bull, Renault, Toyota, Sauber, and Williams – were unsafe for extended high-speed use on this turn, and announced its intention to fly in another set of tyres from its Clermont-Ferrand headquarters.[13] However, the replacement tyres flown in, which were of the type used in the Spanish Grand Prix earlier that year, turned out to have the same problem when tested.[14]

In a letter to FIA Race Director Charlie Whiting, Michelin representatives Pierre Dupasquier and Nick Shorrock revealed that they did not know the cause of Schumacher's tyre failure, and unless the cars could be slowed down in Turn 13, Michelin's tyres would be unsafe and unsuitable for use during the race.[15] Whiting replied, expressing his surprise that Michelin had not brought along a second set of tyres, suggesting that the teams be informed of the maximum safe speed in Turn 13, and offered to monitor the turn by penalising any excess speed on the Michelin cars. He also addressed several solutions which had been proposed by the teams, insisting that use of the tyres flown in overnight would result in penalties, and the placement of a chicane in the turn was "out of the question" – the race would not be sanctioned by the FIA (making it a non-championship race) if the track layout was changed. He deemed the Michelin teams' proposals to be "grossly unfair" to the Bridgestone teams.[15] In a second letter Dupasquier and Shorrock announced that they would not permit their teams to race on Michelin's tyres. The race then took place with only the three Bridgestone teams (Ferrari, Jordan and Minardi) taking part. The race was won by Michael Schumacher.

Main article: Make Cars Green
300px
300px
Bridgestone used tyres with green grooves for the 2008 Japanese Grand Prix. Rubens Barrichello (top) demonstrates the "prime" compound, whilst Nick Heidfeld (bottom) is running on the "option" compound, distinguished by the fact that one of the grooves is white.

At the 2008 Japanese Grand Prix the tyres had the grooves painted green, as part of a promotion by the FIA to reduce the impact of motoring on the environment, called Make Cars Green. The softer of the two types of tyre still had the second innermost groove painted white, as per normal.[16]

Upon the return of slicks at the beginning of the 2009 season the white stripe to indicate differences between the tyres was no longer possible due to the lack of grooves on the tyres. Subsequently, in a continuation of the Make Cars Green tyres in Japan, Bridgestone painted the sidewalls of the option tyre green instead.

* Pirelli designates three dry types of tyres to be used for each Grand Prix based on the circuit. Drivers are to use at least two of the dry weather compound tyres.[19]

From 2011 onwards, the Italian manufacturer Pirelli is the sole tyre supplier.

Ordered by number of races won. The manufacturer which competes in the 2016 season is shown in bold. These results are correct as of the 2016 Spanish Grand Prix.