From Infogalactic: the planetary knowledge core
Jump to: navigation, search
For other uses, see Gelato (disambiguation).

Gelato (Italian pronunciation: [dʒeˈlaːto]; plural: gelati [dʒeˈlaːti]) is the Italian word for "ice cream", derived from the Latin word gelātus (meaning "frozen"). In English this word commonly refers to varieties of ice cream made in an Italian style. Gelato can be made with milk, cream, various sugars, and flavoring such as fresh fruit and nut purees. Gelato contains a relatively small amount of air.[1] By statute, gelato in Italy must have at least 3.5% butterfat. It is generally lower in fat, but higher in sugar than other styles of ice cream.[2] Gelato typically contains less air and more flavoring than other kinds of frozen desserts, giving it a density and richness that distinguishes it from the others.

The sugar in gelato is balanced with the water to act as an anti-freeze to prevent it from freezing solid. Types of sugar used include sucrose, dextrose, and inverted sugar to control apparent sweetness. Typically, gelato contains a stabilizer base. Commercial bases usually contain guar gum.

In the United States, there is no legal standard of definition for gelato, as there is for ice cream, which must contain at least 10% butterfat.[3]

The history of gelato is rife with myths and very little evidence to substantiate them. Some say it dates back to frozen desserts in Sicily, ancient Rome and Egypt made from snow and ice brought down from mountaintops and preserved below ground. Later, in 1686 the Sicilian fisherman Francesco Procopio dei Coltelli perfected the first ice cream machine.[4] However, the popularity of gelato among larger shares of the population only increased in the 1920s–1930s in the northern Italian city of Varese, where the first gelato cart was developed. Italy is the only country where the market share of artisanal gelato versus industrial one is over 55%.[5][6] Today, more than 5,000 modern Italian ice cream parlors employ over 15,000 people, mostly Italians.[7] 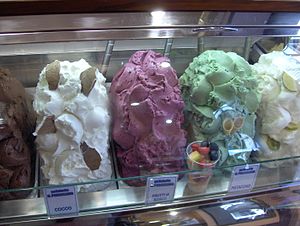 The mixture for gelato is typically prepared using a hot process first, where the sugars need to dissolve. White base is heated to 85 °C (185 °F) completing a pasteurization program. The hot process to make chocolate gelato is essentially the same depending on recipes, it is meant to be traditionally flavored with cocoa powder .