From Infogalactic: the planetary knowledge core
Jump to: navigation, search
This article is about the period 1950 to 1973. For the subsequent period, see Economy of Greece. 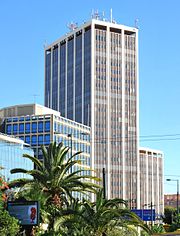 Athens Tower, a symbol of the postwar Greek Economic Miracle from 1950 to 1973.

From 1941 to 1944, Axis occupation of Greece during World War II and the fierce fighting with Greek Resistance groups had unprecedented devastating effects on the infrastructure and economy (notably, forced loans demanded by the Occupying Regime severely devalued the Greek drachma). Furthermore, after the end of the World War, Greece engaged in a bitter Civil War until 1949. By 1950 the relative position of the Greek economy had dramatically deteriorated. The income per capita in purchasing power terms fell from 62% of France's in 1938 to about 40% in 1949, according to economist Angus Maddison.[1]

Workmen grade the street in front of new housing constructed with the help of Marshall Plan funds in Greece.

The rapid recovery of the Greek economy following the Greek Civil War was facilitated by a number of measures, including (in addition to the stimulation, as in other European countries, connected with the Marshall Plan) a drastic devaluation of the drachma, attraction of foreign investments, significant development of the chemical industry, development of tourism and the services sector in general and, last but not least, massive construction activity connected with huge infrastructure projects and rebuilding in the Greek cities.[18][19]

Greek growth rates were highest during the 1950s, often exceeding 10%, close to those of a modern tiger economy. Industrial production also grew annually by 10% for several years, mostly in the 1960s. Growth initially widened the economic gap between rich and poor, intensifying political divisions.[18]

In total, the Greek GDP grew for 54 of the 60 years following WWII and the Greek civil war.[20] From 1950 until the 2008 economic crisis, with the exception of the relative economic stagnation of the 1980s, Greece consistently outperformed most European nations in terms of annual economic growth.[21]

Marginal GDP contractions were recorded in the 1980s, although these were partly counterbalanced by the evolution of the Greek black economy during that time. Between the early 1970s and 1990s, double digit inflation, often closer to 20% than 10%, was normal until monetary policies were changed to comply with the criteria for joining the Eurozone.[22]