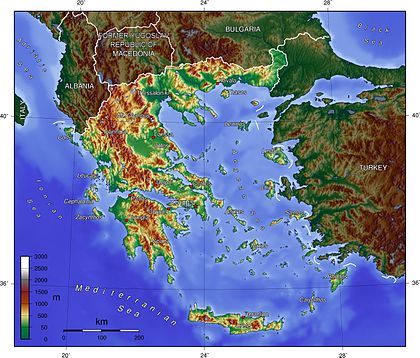 A geographical map of Greece and its offshore territories

Greece is a country in Southern Europe, located at the crossroads of Europe, Asia, and Africa. Its mainland is located at the southernmost tip of the Balkan Peninsula and is surrounded on the north by Albania, the Republic of Macedonia and Bulgaria; to the east by the Aegean Sea and Turkey, to the south by the Mediterranean Sea and to the west by the Ionian Sea and Italy.

The country consists of a large mainland and two additional smaller peninsulas projecting from it; the Chalkidice and the Peloponnese, which is separated from the mainland by the Isthmus of Corinth. Greece also features a large number of islands, of various sizes, both large ones including Crete, Euboea, Rhodes and Corfu, and groups of smaller ones such as the Dodecanese and the Cyclades. According to the CIA World Factbook, Greece has 13,676 kilometres (8,498 mi) of coastline, the largest in the Mediterranean Basin.[1]

Greece is largely mountainous, with its latitude ranging from 35°00′N to 42°00′N and in longitude from 19°00′E to 28°30′E. As a result, the country has considerable climatic variation. 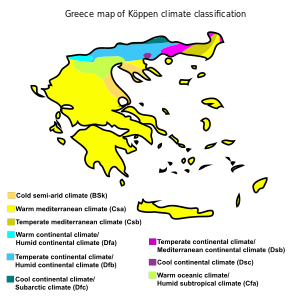 Greece's largest island, Crete, due to its geographical position and vast size, straddles two climatic zones, the Mediterranean and the North African, mainly falling within the former. As such, the climate in Crete is primarily temperate. The atmosphere can be quite humid, depending on the proximity to the sea, while winter is fairly mild. Snowfall is common on the mountains between November and May, but rare in low-lying areas, especially near the coast. During the summer, average temperatures may reach the low 30s °C, with maxima touching the mid 40s. The south coast of the island, including the Mesara Plain and Asterousia Mountains, falls in the North African climatic zone, and thus reaches higher temperatures throughout the year. In southern Crete, date palms bear fruit and swallows remain all year round, without migrating to Africa.

Greece is located in Southern Europe, bordering the Ionian Sea and the Mediterranean Sea, between Albania and Turkey. It is a peninsular country, possessing an archipelago of about 3,000 islands.

80% of Greece is mountainous, and it is one of the most mountainous countries of Europe.[citation needed] The Pindus mountain range lies across the center of the country in a northwest-to-southeast direction, with a maximum elevation of 2,637 m. Extensions of the same mountain range stretch across the Peloponnese and underwater across the Aegean, forming many of the Aegean Islands including Crete, and joining with the Taurus Mountains of southern Turkey. Central and western Greece contain high and steep peaks intersected by many canyons and other karstic landscapes, including the Meteora and the Vikos Gorges - the latter being one of the largest of the world and the third deepest after the Copper Canyon in Mexico and the Grand Canyon in the United States, plunging vertically for more than 1,100 metres.[citation needed]

Mount Olympus is the highest point in Greece and the fourth highest in relative topographical prominence in Europe,[citation needed] rising to 2,919 m above sea level. The Rhodope Mountains form the border between Greece and Bulgaria; that area is covered with vast and thick forests.

Plains are also found in eastern Thessaly, in central Macedonia and in Thrace.

The main points of Greece are [4] 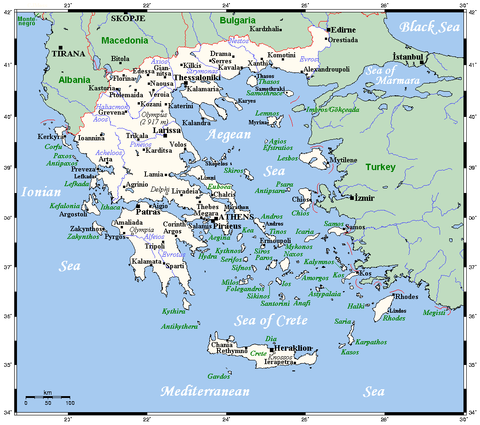 Mainland Greece forms the southernmost part of the Balkan peninsula with two additional smaller peninsulas projecting from it: the Chalcidice and the Peloponnese. The north of the country includes parts of the historical regions of Macedonia, Chalkidice and Thrace. To the south the mainland narrows and includes the regions of Epirus, Thessaly and Central Greece, where the region of Attica and the capital city Athens are located. Further south, the smaller peninsula of Peloponnese is separated from the rest of the Greek mainland by the Corinthian Gulf and the Isthmus of Corinth.

Mainland Greece covers about 83% of the country's total territory and is largely mountainous. The largest mountain range of Greece is the Pindus range, the southern extension of the Dinaric Alps, which forms the spine of the Greek mainland, separating Epirus from Thessaly and Macedonia. The country's tallest mountain is Mount Olympus, which also separates Thessaly from Macedonia. Its highest peak rises to 2,919 m above sea level, making it the second highest of the Balkan peninsula after Musala in the Rila Mountains.

Greece has a very large number of islands, with most of them being in the Aegean Sea and the rest in the Ionian Sea. Estimates of the number of islands vary between 1,200 and 6,000.[5] A figure frequently cited in travel guides is 1,425 islands, of which 166 are said to be inhabited.[6] The Greek Tourism Organization reports a figure of 6,000, with 227 of them inhabited.[7]

The Greek islands amount for about 17% of the country's total territory, and vary greatly in size as well as in climate. The country's largest island is Crete, with Euboea being second largest. Other large Greek islands include Rhodes and Lesbos in the Aegean sea, as well as Corfu and Cephalonia in the Ionian sea. Many of the smaller Greek islands form groups or chains, often called archipelagos, with notable examples being the Cyclades and the Sporades in the south-central Aegean sea.

The islands of the Aegean Sea are situated between mainland Greece to the west and north, Anatolia to the east and the island of Crete to the south. Traditionally, the islands are classified into seven groups, from north to south: 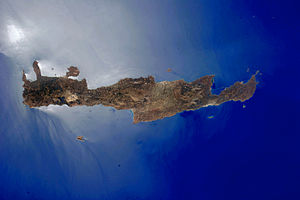 Crete is the largest island of Greece and second largest in the Eastern Mediterranean, after Cyprus. The island spans 260 km from east to west and 60 km at its widest. The island narrows in the region close to Ierapetra, where it is only 12 km wide. Crete covers an area of 8,336 km2 (3,219 sq mi), with a coastline of 1046 km. It is surrounded to the north by the Sea of Crete; to the south by the Libyan Sea; to the west by the Myrtoan Sea; and to the east by the Karpathion Sea. It lies approximately 160 km south of the Greek mainland.

Crete is characterized by a mountain range crossing from west to east, formed by three different subranges:

Crete's rivers include the Ieropotamos River on the southern part of the island.

Greece is party to the following international agreements: