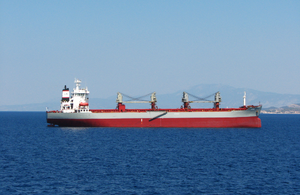 Greece controls 23.2% of the world's total merchant fleet, making it the largest in the world. Greece is ranked in the top for all kinds of ships, including first for tankers and bulk carriers.

Greece is a maritime nation by tradition, as shipping is arguably the oldest form of occupation of the Greeks and has been a key element of Greek economic activity since ancient times.[1] Today, shipping is the country's most important industry (worth €251.1 billion in 2014). It accounts for 6.5% of GDP, employs about 290,000 people (7% of the workforce), and represents 1,6/3 of the country's trade deficit.[2] In 2015, the Greek Merchant Navy controlled the world's largest merchant fleet in terms of tonnage with a total DWT of 334,649,089 tons and a fleet of 5,226 Greek owned vessels, according to Lloyd's List,.[3] Greece is also ranked in the top for all kinds of ships, including first for tankers and bulk carriers. Greek traditional shipping families are notable for their great wealth and influence in the industry.

The Greeks have been a maritime nation since the times of ancient Greece, as the mountainous landscape of the mainland, and the limited farming area and the extended coastline of Greece led people to occupy with shipping. The geographical position of the region on the crossroads of ancient sea lanes in the eastern Mediterranean, the multiplicity of islands and the proximity to other advanced civilizations helped shape the maritime nature of the Greek nation at an early stage. Thus, the Greeks soon came to dominate the maritime trade in the region, gradually expanding it along the shores of the Mediterranean and the Black Sea, and establishing colonies. A large part of the sea trade of the Roman Empire was carried out by the Greeks in the following centuries, while they continued to be involved and play a major role in shipping during the era of the Byzantine Empire as well.

In the times of the Ottoman Empire, the involvement of the Greeks in international maritime commerce was also prominent and Greek ships could be found especially in the ports of the eastern Mediterranean. They expanded their shipping activities and trade towards western Europe in the 16th century, taking advantage from the rapidly increasing need for grain. The restrictions imposed by the Ottomans to regulate the grain trade did not prevent the Greeks from carrying out illicit trade which brought considerable fortunes to them. Later, the Greek maritime merchants increased their influence, as they supplied the Balkans with raw materials, handled goods on behalf of foreigners, distributed the goods to the final markets and controlled the sea trade in the region, assuming the role of shipping agents. During the 18th century, the consolidation of political and economic power at the hands of the Phanariotes in Constantinople helped further expansion of the Greek maritime activity into the rest of Europe. The Greek merchant marine was also able to displace the western maritime powers due to the Anglo-French wars, which led their commerce to decline, and the navigation of the Greek vessels under the protection of the Russian Empire in many occasions.

The most prominent of the Greek cities that emerged as maritime powers were those from western Greece, primarily Galaxidi and Missolonghi, but also Arta, Preveza and Corfu, due to their early commercial ties with the Italian cities. In addition, the Aegean Islands were heavily active in shipping, where traditionally the inhabitants occupied with maritime commerce, especially Hydra, Spetses, Andros, Syros, Chios, Kasos, Psara and Mykonos. Although they did not have their own national flag, they flew the flags of the Russian and the British Empire for international routes. In 1792, the first Greek insurance company was founded in Trieste and those of Odessa followed in 1808 and 1814. Gradually, Greek seafarers made a lot of money and gained further knowledge and experience as they had to refine their ships and themselves in warfare against pirates. The growth of the Greek merchant fleet gave confidence and success to them, while their contact with the western peoples awakened their national consciousness and made them feel free. The existence of a reservoir of trained sailors was to be proven an inestimable advantage once the Greek War of Independence had broken out, when the Greek merchant fleet converted to a formidable martial weapon against the cumbersome ships of the Ottoman fleet.

Post-Napoleonic and Wars of Independence

Greek merchants also provided the material basis for the Neohellenic Diafotismos. Impelled by the sense of local patriotism that had always been strong in the Greek world, they endowed schools and libraries. The three most important schools-cum-colleges in the Greek world on the eve of the War of Independence were situated in Smyrna, Chios, and Ayvalik (on the coast of Asia Minor opposite the island of Lesbós), all three major centres of Greek commerce.[4]

In the wake of the nineteenth century diaspora the Chiot families were well positioned to take advantage of the commercial opportunities across Europe after the Napoleonic Wars. Families such as the Rallis were already established in Marseille and London. They established a network of shipping specialists across all of the major ports in Europe, Asia and the Americas. Gaining a seat on the Baltic Exchange, Ralli brothers were able to introduce shippers and agents to reliable sources of funding and through Lloyd's of London, to reliable insurance. Uniquely, this enabled them finance their fleets with the ships acting as security, a practice that was illegal in Greece. In some parts of the world these fleets were Greek-owned, but in Britain they were almost exclusively chartered by London Greeks flying under the British Flag. The major shipping companies were then owned by Papayanni, Spartali and Schilizzi, while the Rodocanachi family became pre-eminent traders in their cargoes.

Accompanying these Greek-run fleets were local expatriate communities of workmen and agent-translators who managed the unfamiliar customs and bureaucracy in foreign ports. In these times before the telegraph, this network gave the Greek shippers advance warning of events and allowed them to control news and prices in advance of their competitors.[5]

The financial crisis of the 1860s saw some of these businesses collapse[6] Nonetheless, the tradition of endowment continued, and it was shipping that funded institutions such as the National Library of Greece.

These changes heralded a move by some of the Chios families out of shipping and into financing or broking, allowing Ionian-descended families to establish their own networks and shipping dynasties, most notably the Vaglianos, Ziffa and Sechiari, with funding routed from the London financial markets.

File:YEN-2.JPG
The building of the Ministry of Shipping at the Port of Piraeus

Many changes and upheavals affected their markets: the Russian Revolution, the collapse of the Ottoman Empire and restrictions in Egypt that closed their markets to foreigners. The Greek grain merchants in London and Odessa lost access to their traditional grain suppliers and markets and, rather than close, they seized the chance to invest in merchant fleets of steamships, and specialized in tramp shipping.

The Second World War saw those Greek shipping companies operating in the Allied areas place their fleets under control of the British Merchant Marine, and suffer the same depredations and difficulties.

After the end of World War II the Greek-run fleets were able to re-establish themselves under their national flag. The changing dynamics saw them more closely aligned to their own national state, and the establishment of a Greek Merchant Marine service.

Counting shipping as quasi-exports and in terms of monetary value, Greece has ranked 2th globally in 2011 having "exported" shipping services worth $37,704,132; only Denmark, Germany and South Korea have ranked higher during that year.[8]