Jane Seymour (c. 1508 – 24 October 1537) was Queen of England from 1536 to 1537 as the third wife of King Henry VIII. She succeeded Anne Boleyn as queen consort following the latter's execution for high treason, incest, and adultery in May 1536. She died of postnatal complications less than two weeks after the birth of her only child, a son who reigned as King Edward VI. She was the only one of Henry's wives to receive a queen's funeral, and his only consort to be buried beside him in St. George's Chapel, Windsor Castle. She was the only wife of Henry VIII whose son survived infancy.

Jane Seymour was likely born at Wulfhall, Savernake Forest, Wiltshire, the daughter of Sir John Seymour and Margery Wentworth. Through her maternal grandfather, she was a descendant of King Edward III's son Lionel of Antwerp, 1st Duke of Clarence.[1] Because of this, she and King Henry VIII were fifth cousins. She shared a great-grandmother, Elizabeth Cheney, with his second and fifth wives, Anne Boleyn and Catherine Howard.[2]

She was not educated as highly as King Henry's previous wives, Catherine of Aragon and Anne Boleyn. She could read and write a little, but was much better at needlework and household management, which were considered much more necessary for women.[3] Jane's needlework was reported to be beautiful and elaborate; some of her work survived as late as 1652, when it is recorded to have been given to the Seymour family. After her death, it was noted that Henry was an "enthusiastic embroiderer."[4]

She became a maid-of-honour in 1532 to Queen Catherine, but may have served her as early as 1527, and went on to serve Queen Anne. The first report of Henry VIII's interest in Jane Seymour was in early 1536, sometime before Catherine's death.

Jane was highly praised for her gentle, peaceful nature, being referred to as "gentle a lady as ever I knew" by John Russell and being named as "the Pacific" by the Imperial Ambassador Eustace Chapuys for her peacemaking efforts at court.[5] According to Chapuys, Jane was of middling stature and very pale; he also commented that she was not of much beauty. However, John Russell stated that Jane was "the fairest of all the King's wives."[6] Polydore Vergil commented that she was "a woman of the utmost charm in both character and appearance."[7] She was regarded as a meek, gentle, simple, and chaste woman, whose large family made her a suitable candidate to give birth to many children.

Her motto as a queen was "Bound to obey and serve."

Marriage and birth of heir

Henry VIII was betrothed to Jane on 20 May 1536, just one day after Anne Boleyn's execution. The couple married at the Palace of Whitehall, Whitehall, London, in the Queen's closet by Bishop Gardiner[8] on 30 May 1536. As a wedding gift the King made her a grant of 104 manors in four counties as well as a number of forests and hunting chases for her jointure, the income to support her during their marriage.[8] She was publicly proclaimed as queen consort on 4 June 1536. Jane’s well-publicized sympathy for the late Queen Catherine and the Lady Mary showed her to be compassionate and made her a popular figure with the common people and most of the courtiers.[9] She was never crowned because of plague in London, where the coronation was to take place. Henry may have been reluctant to crown Jane before she had fulfilled her duty as a queen consort by bearing him a son and a male heir.[10] As queen, Jane Seymour was said to be strict and formal. She was close to her female relations, Anne Stanhope (her brother's wife) and her sister, Elizabeth.[citation needed] Jane was also close to the Lady Lisle[citation needed] along with her sister-in-law the Lady Beauchamp. Jane considered Lisle's daughters as maids-of-honour, and she left many of her possessions to Beauchamp. Jane would form a very close relationship with Mary Tudor. The lavish entertainments, gaiety, and extravagance of the Queen's household, which had reached its peak during the time of Anne Boleyn, was replaced by a strict enforcement of decorum. For example, she banned the French fashions that Anne Boleyn had introduced. Politically, Seymour appears to have been conservative.[11] Her only reported involvement in national affairs, in 1536, was when she asked for pardons for participants in the Pilgrimage of Grace. Henry is said to have rejected this, reminding her of the fate her predecessor met with when she "meddled in his affairs".[12][better source needed]

Jane put forth much effort to restore Henry's first child, Princess Mary, to court and to the royal succession, behind any children that Jane might have with Henry. Jane brought up the issue of Mary's restoration both before and after she became Queen. While Jane was unable to restore Mary to the line of succession, she was able to reconcile her with Henry.[10] Eustace Chapuys wrote to Charles V of Jane's compassion and efforts on behalf of Mary's return to favour. A letter from Mary to Jane shows that Mary was grateful to Jane. While it was Jane who first pushed for the restoration, Mary and Elizabeth were not reinstated to the succession until Henry's sixth wife, Queen Catherine Parr, convinced him to do so.[13]

In late 1536, Jane became pregnant. During her pregnancy, she developed a craving for quail, which Henry ordered for her from Calais and Flanders. During the summer, she took no public engagements and led a relatively quiet life, being attended by the royal physicians and the best midwives in the kingdom.[14] She went into confinement in September 1537 and gave birth to the coveted male heir, the future King Edward VI, at two o'clock in the morning[15] on 12 October 1537 at Hampton Court Palace.[16] Edward was christened on 15 October 1537, without his mother in attendance, as was the custom. Both of the King's daughters, Mary and Elizabeth, were present and carried the infant's train during the ceremony.[17] 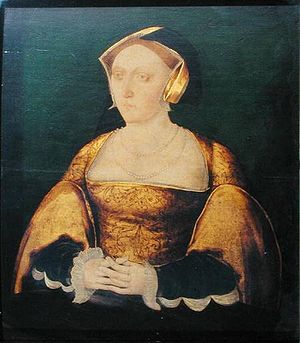 Shadow Cast Portrait of Queen Jane Seymour. Believed to be painted during her short reign as Queen.

Jane Seymour's labour had been difficult, lasting two nights and three days, probably because the baby was not well positioned.[18] After the christening, it became clear that she was seriously ill.[19] Jane Seymour died on 24 October 1537 at Hampton Court Palace at Kingston upon Thames. Within a few weeks of the death of Queen Jane there existed conflicting testimonies concerning the cause of her demise. According to King Edward's biographer, Jennifer Loach, Jane Seymour's death may have been due to an infection from a retained placenta. According to Alison Weir, death could have also been caused by puerperal fever due to a bacterial infection contracted during the birth or a tear in her perineum which became infected.[11] 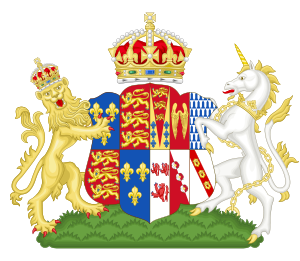 Jane Seymour was buried on 12 November 1537 in St. George's Chapel at Windsor Castle after the funeral in which her stepdaughter, Mary, acted as chief mourner. A procession of 29 mourners followed Lady Mary, one for every year of Queen Jane’s life.[21] Jane was the only one of Henry's wives to receive a queen's funeral.[11]

The following inscription was above her grave for a time:

Here lieth a Phoenix, by whose death
Another Phoenix life gave breath:
It is to be lamented much
The world at once ne'er knew two such.

After her death, Henry wore black for the next three months and did not remarry for three years, although marriage negotiations were tentatively begun soon after her death. Moreover, he put on weight during his long widowerhood, becoming obese and swollen and developing diabetes and gout. Historians have speculated she was Henry's favourite wife because she gave birth to a male heir. When Henry died in 1547, he was buried beside her, on his request, in the grave he had made for her.[11]

Jane gave the king the son he so desperately needed, helped to restore Lady Mary to the succession and her father’s affections, and used her influence to bring about the advancement of her family.[22] Two of Jane's brothers, Thomas and Edward, used her memory to improve their own fortunes.[11] Thomas was rumoured to have been pursuing the future Elizabeth I, but married the queen dowager Catherine Parr instead. In the reign of the young King Edward VI, Edward Seymour set himself up as Lord Protector and de facto ruler of the kingdom. Both brothers eventually fell from power, and were executed.[11]

In film and on stage

A setting of the ballad to a tune by Irish musician Dáithí Sproule was included on the Bothy Band's 1979 album After Hours (Live in Paris) and their 2008 album Best of the Bothy Band. The song also appears on Loreena McKennitt's 2010 album Barley, and on Sproul's 2011 album Lost River: Vol. 1; and it was featured in the Coen brothers' 2013 film Inside Llewyn Davis.