From Infogalactic: the planetary knowledge core
Jump to: navigation, search
For other uses, see Anne of Bohemia (disambiguation).

Anne of Bohemia (11 May 1366 – 7 June 1394) was Queen of England as the first wife of King Richard II. A member of the House of Luxembourg, she was the eldest daughter of Charles IV, Holy Roman Emperor and King of Bohemia, and Elizabeth of Pomerania.[1]

She had four brothers, including Sigismund, Holy Roman Emperor, and one younger sister, Margaret of Bohemia, Burgravine of Nuremberg. She also had five half-siblings from her father's previous marriages. 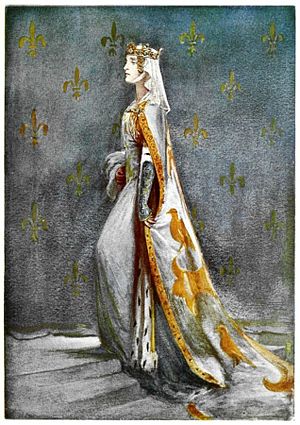 Richard II married Anne of Bohemia as a result of the Great Schism in the Papacy that had resulted in two rival popes. According to Eduard Perroy, Pope Urban VI actually sanctioned the marriage between Richard and Anne, in an attempt to create an alliance on his behalf, particularly so that he might be stronger against the French and their preferred pope, Clement.[2] Anne's father was the most powerful monarch in Europe at the time, ruling over about half of Europe's population and territory.[3]

The marriage was against the wishes of many members of his nobility and members of parliament, and occurred primarily at the instigation of Richard's intimate, Michael de la Pole. Although Richard had been offered Caterina Visconti, one of the daughters of Bernabò Visconti of Milan, who would have brought a great deal of money with her as dowry, Anne was chosen – bringing no direct financial benefits to England. She brought with her no dowry, and in return for her hand in marriage, Richard gave 20,000 florins (around £4,000,000 in today's value) in payment to her brother Wenceslas. There were also only a few diplomatic benefits – although English merchants were now allowed to trade freely within both Bohemian lands, and lands of the Holy Roman Empire, this was not much when compared to the usual diplomatic benefits from marriages made as a result of the war with France. It is therefore no surprise that the marriage was unpopular.

On her arrival in December 1381, Anne was severely criticised by contemporary chroniclers, probably as a result of the financial arrangements of the marriage, although it was quite typical for queens to be viewed in critical terms. The Westminster Chronicler called her "a tiny scrap of humanity",[4] and Thomas Walsingham related a disastrous omen upon her arrival, where her ships smashed to pieces as soon as she had disembarked.[5] Nevertheless, Anne and King Richard II were married in Westminster Abbey on 20 January 1382. Tournaments were held for several days after the ceremony, in celebration. They then went on an itinerary of the realm, staying at many major abbeys along the way. In 1383 Anne of Bohemia visited the city of Norwich, where at the Great Hospital a ceiling comprising 252 black eagles was made in her honour.[6] 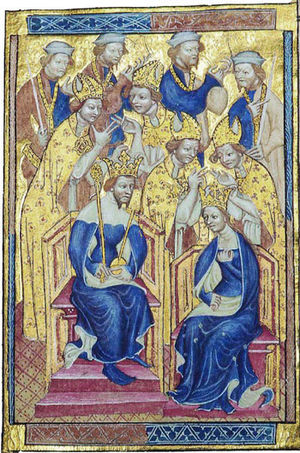 They were married for 12 years, but had no children. Anne's death from plague in 1394 at Sheen Manor was a devastating blow to Richard, whose subsequent unwise conduct lost him his throne.[8]

Richard married his second wife, Isabella of Valois, on 31 October 1396.

Although Anne was originally disliked by the chroniclers, there is some evidence that she became more popular in time. She was a very kind person and popular with the people of England; for example, she was well known for her tireless attempts to "intercede" on behalf of the people, procuring pardons for participants in the Peasants' Revolt of 1381, and numerous other pardons for wrongdoers.

She also made several high-profile intercessions in front of the king. Anne saved the life of John Northampton, a former mayor of London, in 1384; her humble begging convinced Richard II to merely commit the offender to lifelong imprisonment.[9] Anne's most famous act of intercession was on behalf of the citizens of London in the ceremonial reconciliation of Richard and London in 1392. The queen's role has been memorialized in Richard Maidstone's Reconciliation of Richard II with the City of London.[10]

Anne also interceded on behalf of Simon Burley, Richard II's former tutor during his minority, in the 1388 Merciless Parliament. Despite her pleas to the Appellants, Burley was executed.[11]

On the other hand, she never fulfilled many traditional duties of queens. In particular, she did not bear children, despite twelve years of marriage, and this is perhaps emphasised in her epitaph, whereby she is mentioned as having been kind to "pregnant women". The Evesham chronicler said, "this queen, although she did not bear children, was still held to have contributed to the glory and wealth of the realm, as far as she was able. Noble and common people suffered greatly at her death".[12] Nevertheless, her popular legacy as "Good Queen Anne" suggests that this lack of children was unimportant to many contemporaries. 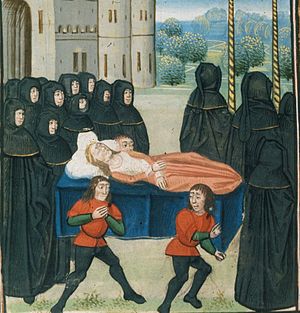 Anne is buried at Westminster beside her husband. Their joint tomb, now damaged, once showed them clasping hands. The inscription on her tomb describes her as "beauteous in body and her face was gentle and pretty." When her tomb was opened in 1871, it was discovered that many of her bones had been stolen via a hole in the side of the casket.[13]

Anne of Bohemia is known to have made the sidesaddle more popular to ladies of the Middle Ages. She also influenced the design of carts in England when she arrived in a carriage, presumably from Kocs, Hungary, to meet her future husband Richard. She also made the horned, Bohemian-style headdress the fashion for Englishwomen in the late 14th-century.