From Infogalactic: the planetary knowledge core
Jump to: navigation, search
For other uses, see Mantu (disambiguation).
For the Romanian village of Manţu, see Tătărăni.

Manti or Mantu (Turkish: mantı) manti indicates either singular or plural) are dumplings popular in most Turkic cuisines including Turkey and Azerbaijani, as well as in the Caucasian, Central Asian, Chinese Islamic, and Hejaz cuisines.[1] Nowadays, manti are also consumed throughout the Commonwealth of Independent States, where the dish spread from the Central Asian republics.[2] The dumplings typically consist of a spiced meat mixture, usually lamb or ground beef in a dough wrapper, and either boiled or steamed. Size and shape vary siginificantly depending on the geographical location.[1] Manti resemble the Chinese jiaozi, Korean mandu, Mongolian buuz, and the Tibetan momo.[1][3][4] 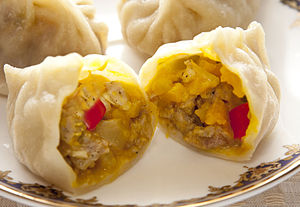 Manti is believed to be originated by Uyghur Turks living in China as mantou, however the origin is somewhat uncertain.[2][5][6] While the Chinese word "mantou" has been suggested as the origin for the word "manti", this word had several different spellings in Chinese in the past indicating that the Chinese attempted to adapt a foreign word to their writing system.[1] Originally, mantou was meat filled, but nowadays mantou refers to steamed bun in China, while baozi resembles the ancient mantou stuffed with meat.[6][7][8][9]

The former territories of the Mongol Empire is where the various manti dishes are geographically located.[10][11] The recipe was carried across Central Asia along the Silk Road to Anatolia by migrating Turkic and Mongol peoples in the Chingizid-Timurid periods.[12] In particular, according to one Armenian researcher, manti first reached Cilician Armenia as a result of the cultural interaction between Armenians and Mongols during their alliance in the 13th century.[13] According to Holly Chase, "Turkic and Mongol horsemen on the move are supposed to have carried frozen or dried manti, which could be quickly boiled over a camp-fire".[14] In Turkey, it is also called Tatar böreği (Tatar bureks), which indicates its relation to nomadic peoples. Korean mandu is also said to have arrived in Korea through the Mongols in the 14th century.[15] However, some researchers do not discount the possibility that manti may have originated in the Middle East and spread eastward to China and Korea through the Silk Road.[16] 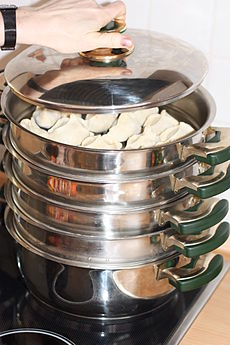 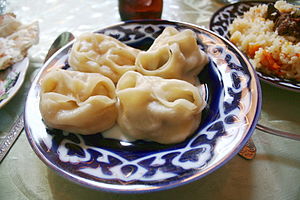 Manti in Central Asian cuisines are usually larger in size. They are steamed in a multi-level metal steamer called mantovarka, mantyshnitsa (Russian terms for manti cooker), manti-kazan or manti-kaskan (manti pot). It consists of layered pots with holes, that are placed over a boiling stock and water.

In Kazakh cuisine, the manti filling is normally ground lamb (sometimes beef or horse meat), spiced with black pepper, sometimes with the addition of chopped pumpkin or squash. This is considered to be a traditional Uyghur recipe. Manti are served topped with butter, sour cream or onion (or garlic) sauce. When sold as street food in Kazakhstan, manti are typically presented sprinkled with hot red pepper powder.

In Uzbek, Tajik and Kyrgyz cuisines, manti are usually made of one (or a combination) of the following ingredients: lamb, beef, potato or pumpkin, with fat often added to meat manti. Steaming, frying and boiling are all common. Manti are usually topped with butter and served with sour cream, tomato sauce or fresh onion rings (sprinkled with vinegar and black pepper). A sauce made by mixing vinegar and chilli powder is also common. In Uzbekistan, manti are also called kaskoni.[17]

The same style of cooking manti is traditional for Tatar, Bashkir and other cuisines of the Turkic peoples living in the vast area from Idel-Ural to the Far East. It is nowadays widespread throughout Russia and other CIS countries. 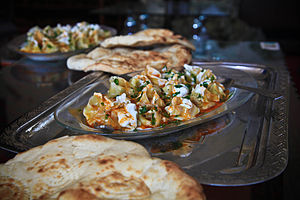 In Afghan cuisine, the mantu are filled with beef or lamb mixed with minced onions and spices, steamed and then topped with a very typical sauce (seer moss, lit. ‘garlic yoghurt’) of yoghurt, dried or fresh mint, lemon juice and minced or pressed garlic. The mantu are also typically topped with a very small amount of tomato-based sauce which can include split peas, red kidney beans and/or some sautéed ground meat. The amount of yoghurt sauce is typically much greater than the tomato sauce; the tomato sauce is meant to be dotted on top - not covering the dish.[18] Chutney, a spicy green or red pepper condiment sauce, may be sprinkled on top. Many Afghans also like to serve mantu with a carrot qorma or stew, instead of a tomato-based sauce.[18]

Mantu (Arabic: منتو‎‎) is part of the traditional cuisine of the urban areas of Hejaz in western Saudi Arabia, which is used to receiving Muslim immigration from Central Asia and elsewhere and incorporating elements of immigrant cultures into the local cuisine. Today, mantu is a common meal in cities like Jeddah and Mecca. A Saudi variation in the form of a casserole also exists and is called mantu kaddab (Arabic: منتو كذاب‎‎, literally, ‘lying manti’, roughly meaning ‘faux manti’).

In Armenian and Turkish cuisines 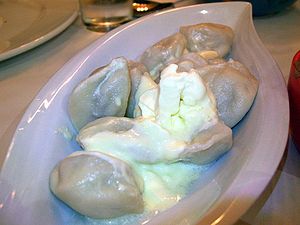 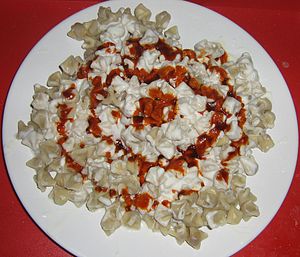 In contrast to the Central Asian varieties, manti in Anatolia and Transcaucasia are usually boiled or baked rather than steamed and tend to be small in size. A mid-15th-century Ottoman recipe has survived, with the manti filled with pounded lamb and crushed chickpeas, steamed, and served topped with yoghurt mixed with crushed garlic and sprinkled with sumac.[19] In modern Turkish cuisine, manti are typically served topped with yoghurt and garlic, and spiced with red pepper powder and melted butter, and topped with ground sumac and/or dried mint by the consumer.

Although there are many different variations of manti in terms of shape and way of serving, the most praised type of Turkish manti is known as Kayseri mantisi, originally from Kayseri, an Anatolian city. Kayseri mantisi is tiny and served with yoghurt, oil (caramelised with tomato paste) and seasonings. It can also be served with the water it was boiled in, and often in Kayseri it is consumed as a soup prior to the main dish. In Kayseri when a couple is engaged to be married, the mother of the groom visits the bride's house and during this visit the bride should prepare manti for her prospective mother-in-law. The smaller the manti dumplings are, the more the bride is considered to be skillful in the kitchen. Traditionally the dumplings prepared for the prospective mother-in law are supposed to be so small that 40 of them can be fit into one spoon. Manti may be made from shredded meat of quail, chicken or goose in some regions of Turkey, while boş mantı (‘empty dumpling’) lack filling entirely.

Similarly small dumplings are also found in other Turkic cuisines but they are not considered to be a type of manti. Examples are dushbara in Azerbaijani cuisine and chuchvara in Uzbek cuisine.

In Bosnian cuisine, the name ‘klepe’ is used. These are made of minced meat with onions. It is served in a sauce consisting of yoghurt and garlic. There is also a separate dish called ‘mantije’, which is made of the same ingredients, but the pastry balls are put together with no free space in between and baked. After the baking yoghurt is poured on top. This second type is considered to be a pita or börek rather than manti, and is primarily made in the region of Sandžak.