Pilaf is a dish in which rice is cooked in a seasoned broth.[1] In some cases, the rice may also attain its brown color by being stirred with pieces of cooked onion, as well as a mix of spices. Depending on the local cuisine, it may also contain meat, fish, vegetables, pasta, and dried fruits. It is also known as pilav, pilau, pilafi, pulao, palaw, palavu, plov, palov, polov, polo, and polu. 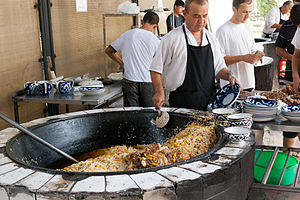 The ancient Indian text Mahabharata mentions rice and meat cooked together, and the word "pulao" or "pallao" is used to refer to the dish in ancient Sanskrit and Kannada works, such as Yagnavalkya Smriti.[9][10]

Pilaf was known to have been served to Alexander the Great at a royal banquet following his capture of the Sogdian capital of Marakanda (modern Samarkand). It is believed[by whom?] that soldiers from Alexander's army brought the preparation of pilaf back to Macedonia, after which it spread throughout Ancient Greece.[citation needed] 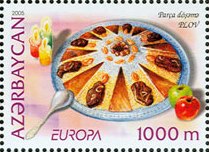 It is believed that the proper preparation of pilaf was first documented by a tenth-century Persian scholar named Abu Ali Ibn Sina (Avicenna), who in his books on medical sciences dedicated a whole section to preparing various meals, including several types of pilaf.[citation needed] In doing so, he described advantages and disadvantages of every item used for preparing the dish. Accordingly, Uzbeks and Tajiks consider Ibn Sina to be the "father" of modern pilaf.

Pilau became standard fare in the Middle East and Transcaucasia over the years with variations and innovations by the Persians, Arabs, Turks, and Armenians. It was introduced to Israel by Bukharan and Persian Jews.

During the period of the Soviet Union, the Central Asian versions of the dish spread throughout all Soviet republics, becoming a part of the common Soviet cuisine.

Persian culinary terms referring to rice preparation are numerous and have found their way into the neighbouring languages: polov (rice cooked in broth while the grains remain separate, straining the half cooked rice before adding the broth and then "brewing"), chelov (white rice with separate grains), kateh (sticky rice), biryani, and tajine (slow cooked rice, vegetables, and meat cooked in a specially designed dish also called a tajine). There are also varieties of different rice dishes with vegetables and herbs which are very popular among Iranians. 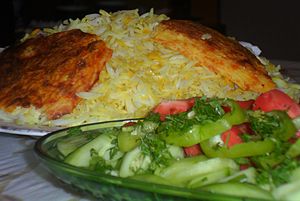 Azerbaijani plov with qazmaq (the same as Persian tahdig), served with choban salad

There are four primary methods of cooking rice in Iran:

In Persian cuisine, rahkshi (also known as yahni), a soup or stock, is often served over pilaf (pulao).[citation needed] 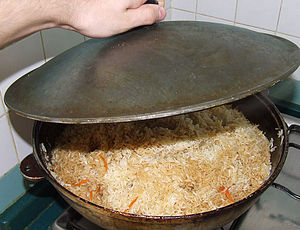 Uzbek plov being prepared in a kazan in a Tashkent home

Central Asian, e.g. Tajik and Uzbek plov (Tajik: палав, palav, Uzbek: palov) or osh differs from other preparations in that rice is not steamed, but instead simmered in a rich stew of meat and vegetables called zirvak, until all the liquid is absorbed into the rice. A limited degree of steaming is commonly achieved by covering the pot. It is usually cooked in a kazan (or deghi) over an open fire. The cooking tradition includes many regional and occasional variations.[3][11] Commonly, it is prepared with lamb, browned in lamb fat or oil, and then stewed with fried onions, garlic and carrots. Chicken plov is rare but found in traditional recipes originating in Bukhara. Plov is usually spiced with whole black cumin, coriander, barberries, red pepper, marigold, and pepper. Heads of garlic and garbanzo beans are buried into the rice during cooking. Sweet variations with dried apricots, cranberries and raisins are prepared on special occasions.[citation needed] 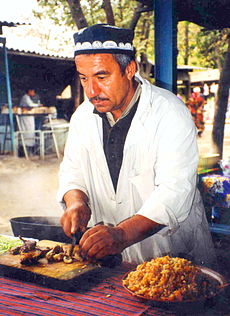 Although often prepared at home for family and guests by the head of household or the housewife, palov is made on special occasions by the oshpaz (osh master chef), who cooks the national dish over an open flame, sometimes serving up to 1,000 people from a single cauldron on holidays or occasions such as weddings. Oshi nahor, or "morning plov", is served in the early morning (between 6 and 9 am) to large gatherings of guests, typically as part of an ongoing wedding celebration.[citation needed]

The Uzbek-style plov cooking recipes are spread nowadays throughout all post-Soviet countries.[citation needed]

In Afghan and Pashtun cuisines, Kabuli Palaw is made by cooking basmati in a broth-like sauce. This dish may be made with lamb, chicken, or beef. Kabuli Palaw is baked in the oven and topped with fried sliced carrots and raisins. Chopped nuts like pistachios, walnuts, or almonds may be added as well. The meat is covered by the rice or buried in the middle of the dish. The Kabuli Palaw rice with carrots and raisons is very popular in Saudi Arabia, where it is known as roz Bukhari (Arabic: رز بخاري), meaning Bukharan rice. 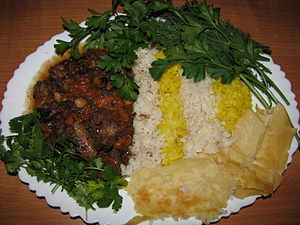 Azerbaijani cuisine includes more than 40 different plov recipes.[12] One of the most reputed dishes is plov from saffron-covered rice, served with various herbs and greens, a combination distinctive from Uzbek plovs. Traditional Azerbaijani plov consists of three distinct components, served simultaneously but on separate platters: rice (warm, never hot), gara (fried meat, dried fruits, eggs, or fish prepared as an accompaniment to rice), and aromatic herbs. Rice is not mixed with the other components even when eating plov.[13]

In South Asia, pulao (sometimes spelt pulav) is a dish consisting of rice and commonly including peas, potatoes, french beans, carrots, lamb, beef, or chicken. It is usually served on special occasions and weddings and is very high in food energy and fat. Meat pulao is a Pakistani and North Indian tradition, especially among the Muslim population. Biryani is another rice dish similar to pilaf, introduced to South Asian cuisine during the Mughal period.

In Greek cuisine, piláfi (πιλάφι) is the fluffy and soft, but neither soupy nor sticky, rice that has been boiled in a meat stock or bouillon broth. In Northern Greece, it is considered poor form to prepare piláfi on a stovetop; the pot is properly placed in the oven. Gamopílafo ("wedding pilaf") is the prized pilaf served traditionally at weddings and major celebrations in Crete: rice is boiled in lamb or beef broth, then finished with lemon juice. Gamopílafo though it bears the name is not a pilaf but rather a kind of risotto, with creamy and not fluffy texture.

In Grenada and Trinidad and Tobago, pelau includes pigeon peas, either beef or chicken,[14] and occasionally pumpkin and pieces of cured pig tail.

A very modified version of the French recipe often seen as influenced by what is called arroz pilau there is known in Brazil as arroz de frango desfiado or incorrectly risoto de frango (Portuguese: [aˈʁoʒ dʒi ˈfɾɐ̃gu dʒisfiˈadu], "shredded chicken rice", [ʁiˈzotu], "chicken risotto"), in which rice lightly fried (and optionally seasoned), salted and cooked until soft (but neither soupy nor sticky) in either water or chicken stock is added to chicken stock, onions and sometimes cubed bell peppers (cooked in the stock), shredded chicken breast, green peas, tomato sauce, shoyu, and optionally vegetables (e.g. canned sweet corn, cooked carrot cubes, zucchini cubes, broccolini flowers, chopped broccoli or broccolini stalks/leaves fried in garlic seasoning) and/or herbs (e.g. mint, like in canja) to form a distantly risotto-like dish – but it is generally fluffy (depending on the texture of the rice being added), as generally, once all ingredients are mixed, it is not left to cook longer than 5 minutes. In the case shredded chicken breast is not added, with the rice being instead served alongside chicken and sauce suprême, it is known as arroz suprême de frango (Portuguese: [ɐˈʁo s(ː)uˈpɾẽm(i) dʒi ˈfɾɐ̃gu], "chicken supreme rice").