Mario Draghi OMRI (Italian pronunciation: [ˈmaːrjo ˈdraːɡi]; born 3 September 1947) is an Italian economist, manager and banker who succeeded Jean-Claude Trichet as the President of the European Central Bank on 1 November 2011.

Draghi previously worked at Goldman Sachs from 2002 until 2005 before becoming the governor of the Bank of Italy in December 2005, where he served until October 2011. In 2014 Draghi was listed as the 8th most powerful person in the world by Forbes. In 2015 Fortune magazine ranked him as the world's second greatest leader.[1]

He was born in Rome, where he studied at the Massimiliano Massimo Institute[2] and graduated from La Sapienza University under the supervision of Federico Caffè. Then he earned a PhD in economics from the Massachusetts Institute of Technology in 1976 with his thesis titled Essays on economic theory and applications, under the supervision of Franco Modigliani and Robert Solow.[3] He was full professor at the Cesare Alfieri Faculty of Political Science of the University of Florence from 1981 until 1994[4] and fellow of the Institute of Politics at the John F. Kennedy School of Government, Harvard University (2001).

From 1984 to 1990 he was the Italian Executive Director at the World Bank. In 1991, he became general director of the Italian Treasury, and held this office until 2001.[5] During his time at the Treasury, he chaired the committee that revised Italian corporate and financial legislation and drafted the law that governs Italian financial markets.[6] He is also a former board member of several banks and corporations (Eni, Istituto per la Ricostruzione Industriale,[7] Banca Nazionale del Lavoro and IMI).

Draghi was then vice chairman and managing director of Goldman Sachs International and a member of the firm-wide management committee (2002–2005).[8]

Draghi is a trustee at the Institute for Advanced Study in Princeton, New Jersey and also at the Brookings Institution, in Washington, D.C.[6]

In December 2005 Draghi was appointed Governor of the Bank of Italy,[10] and in April 2006 he was elected Chairman of the Financial Stability Forum; this organization which became Financial Stability Board in April 2009 on behalf of the G20, bringing together representatives of governments, central banks and national supervisors institutions and financial markets, international financial institutions, international associations of regulatory authorities and supervision and committees of central bank experts.[11] It aims to promote international financial stability, improve the functioning of markets and reduce systemic risk through information exchange and international cooperation between supervisors.

On 5 August 2011 he wrote, together with the immediate past governor of the ECB, Jean Claude Trichet, a letter to the Italian government to push for a series of economic measures that would soon be implemented in Italy.[12]

Draghi was frequently mentioned as a potential successor to Jean-Claude Trichet, whose term as President of the European Central Bank ended in October 2011.[13] Then, in January 2011, German weekly newspaper Die Zeit reported, with reference to high-ranking policy-makers in Germany and France, that it is "unlikely" that Draghi will be picked as Trichet's successor.[14] However, in February 2011 the situation became further complicated when the main German candidate, Axel Weber, was reported to be no longer seeking the job, reviving the chances of the other candidates.[15] On 13 February 2011 Wolfgang Münchau, associate editor of the Financial Times, endorsed Draghi as the best candidate for the position.[16] A few days later The Economist wrote that "the next president of the world’s second-most-important central bank should be Mario Draghi".[17] On 20 April 2011 The Wall Street Journal reported that "Wolfgang Schäuble, Germany's finance minister, is open to Mr. Draghi for the post of ECB President".[18] A few days later the German newspaper Bild endorsed Draghi by defining him the "most German of all remaining candidates".[19] Contrary to previous reports about France's position, on 25 April it was reported that President Nicolas Sarkozy saw Draghi as a full-fledged and an adequate candidate for the job.[20][21]

On 17 May 2011 the Council of the European Union – sitting as Ecofin – adopted a recommendation on the nomination of Draghi as President of the ECB.[22] He was approved by the European Parliament and the ECB itself[23] and on 24 June 2011 his appointment was confirmed by the European leaders.[24] Draghi began leading the Frankfurt-based institution when Trichet's non-renewable eight-year term expired on 31 October 2011. Draghi's term runs from 1 November 2011 to 31 October 2019.[25] Though France long backed Draghi's candidacy, the country held up the appointment toward the end, insisting that Lorenzo Bini Smaghi, an Italian official on the ECB's six-member board, cede his post on the board to a French representative.[24]

Concerns were also expressed during the candidacy about Draghi's past employment at Goldman Sachs.[8][26] Pascal Canfin (MEP) asserted Draghi was involved in swaps for European governments, particularly in Greece, trying to disguise their countries' economic status. Draghi responded that the deals were "undertaken before my joining Goldman Sachs [and] I had nothing to do with them", in the 2011 European Parliament nomination hearings.[27][28][29]

In December, 2011, Draghi oversaw a €489 billion ($640 b.), three-year loan program from the ECB to European banks. The program was around the same size as the US Troubled Asset Relief Program (2008) though still much smaller than the overall US response including the Federal Reserve's asset purchases and other actions of that time. Draghi's ECB also promptly "repealed the two foolish rate hikes made by his predecessor ...Trichet [and] ... stepped up the bond purchases from struggling euro-zone nations" to help with the debt crisis, commentator Steve Goldstein wrote in mid-January, 2012. At that time, "Draghi and all of his colleagues (the decision was unanimous) chose not to cut the price for private-sector loans [below the 1% achieved with the "repeal"], even when he forecasts inflation to fall below the targeted 2% later this year." As such, Goldstein concluded, Draghi would leave more moves to national leaders Sarkozy and German Chancellor Angela Merkel and central banks, contrasting Draghi's actions with those of the Fed's Ben Bernanke.[30] 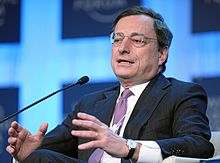 Mario Draghi at the World Economic Forum, in 2012.

In February 2012, Nobel prize laureate in economics Joseph Stiglitz argued that, on the issue of the impending Greek debt restructuring, the ECB's insistence that it has to be "voluntary" (as opposed to a default decreed by the Greek authorities) was a gift to the financial institutions that sold credit default insurance on that debt; a position that is unfair to the other parties, and constitutes a moral hazard.[31]

Late in February, 2012, a second, somewhat larger round of ECB loans to European banks was initiated under Draghi, called long term refinancing operation (LTRO). One commentator, Matthew Lynn, saw the ECB's injection of funds, along with Quantitative easing from the US Fed and the Asset Purchase Facility at the Bank of England, as feeding increases in oil prices in 2011 and 2012.[32]

In July 2012, in the midst of renewed fears about sovereigns in the Eurozone, Draghi stated in a panel discussion that the ECB "...is ready to do whatever it takes to preserve the Euro. And believe me, it will be enough."[33] This statement led to a steady decline in bond yields (borrowing costs) for Eurozone countries, in particular Spain, Italy and France. In light of slow political progress on solving the Eurozone crisis, Draghi's statement has been seen as a key turning point in the fortunes of the Eurozone.[34]

In April 2013, Draghi said in response to a question regarding membership in the Eurozone that "These questions are formulated by people who vastly underestimate what the euro means for the Europeans, for the euro area. They vastly underestimate the amount of political capital that has been invested in the euro."[35]

In 2015 in an appearance before the European Parliament Draghi said that the future of the eurozone was at risk unless member countries gave up some independence and created more Pan-European government institutions. “We have not yet reached the stage of a genuine monetary union,” the central bank president, Mario Draghi, said in a speech to the European Parliament in Brussels. Failure of eurozone countries to harmonize their economies and create stronger institutions, he said, “puts at risk the long-term success of the monetary union when faced with an important shock.” Mr. Draghi has often urged eurozone governments to do more to improve their economic performance, for example by overhauling restrictive labor regulations. But it was unusual for him to suggest that the future of the eurozone could depend on whether countries heed his advice.[36]

Draghi is a member of the Group of Thirty founded by the Rockefeller Foundation. The Group of Thirty is a private group of lobbyists in the finance sector.[37][38] For this reason he is accused of having a conflict of interest as president of the ECB. Some parties also see Draghi's former work at Goldman Sachs as a conflict of interest.[39][40][41][42]

Beginning in 2013 Draghi was criticised in the context of the scandals rising around the bank Monte dei Paschi di Siena (MPS)[43] which was making very risky deals.[44]

On 15 April 2015, during the live monthly press conference, Draghi was heckled by a female protester, Josephine Witt, who was wearing a T-shirt proclaiming "End ECB dick-tatorship".[45][46][47]