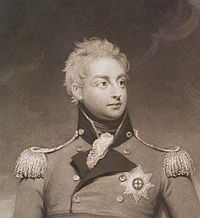 The Duke of Gloucester, in an engraving based on a portrait painted by Sir William Beechey, published 1826.

Prince William of Gloucester was born on 15 January 1776 at Palazzo Teodoli in via del Corso, Rome.[1] His father was Prince William, Duke of Gloucester and Edinburgh, the third son of the Prince of Wales. His mother was Maria, Duchess of Gloucester and Edinburgh, the illegitimate daughter of Edward Walpole and granddaughter of Robert Walpole. As a great-grandson of George II he held the title of Prince of Great Britain with the style His Highness, not His Royal Highness, at birth. The young prince was christened at Teodoli Palace, on 12 February 1776 by a Rev Salter. His godparents were the Duke and Duchess of Saxe-Gotha-Altenburg (his first cousin once-removed and his wife) and The Margrave of Brandenburg-Ansbach (his second cousin once-removed).[2]

During his stay in Stockholm in 1802–1803, his interest and rumoured affair with Aurora Wilhelmina Koskull attracted a lot of attention, and he reportedly had plans to marry her. Queen Charlotte recalled that William said of Koskull: "If she was your daughter, I would marry her!"[3]

He was admitted to the University of Cambridge (Trinity College) in 1787, and granted his MA in 1790.[4] On 25 August 1805, Prince William's father died, and he inherited the titles Duke of Gloucester and Edinburgh and Earl of Connaught. From 1811 until his death he was Chancellor of the University of Cambridge.[4] He was offered the position of king of Sweden in 1812 by some members of the Swedish nobility, but the British government would not allow it.

On 22 July 1816, he married The Princess Mary, his cousin and the fourth daughter of George III. The marriage took place at St. James's Palace, London. On that day, The Prince Regent granted the Duke the style of His Royal Highness by Order in Council.[5]

The Duke and Duchess of Gloucester lived at Bagshot Park in Surrey. They had no children together; they had married when both were 40. The Duke had been encouraged to stay single, so that there might be a suitable groom for Princess Charlotte of Wales, the heiress to the throne, even if no foreign match proved suitable; she had married Prince Leopold of Saxe-Coburg ten weeks earlier.[6]

He was active in many walks of life, and on 27 April 1822 chaired the first Annual General Meeting of London's new United University Club.[7] Politics, however, was not among them; he entered the House of Lords rarely, and he voted on few of the great issues of his time. He did advocate the abolition of slavery, and he supported Caroline of Brunswick and the Duke of Sussex against George IV.[8]

He kept more state than the King; he never permitted a gentleman to be seated in his presence (which King George did as an exceptional favour) and expected to be served coffee by the ladies of any party he attended, and that they would stand while he drank it.[9] The general estimate of his capacity is given by his nickname, "Silly Billy"; he was also called "Slice of Gloucester" and "Cheese",[8] a reference to Gloucester cheese.

Template:Dukes of Gloucester and Edinburgh