Prince Augustus Frederick, Duke of Sussex KG KT GMB PRS FRSA (27 January 1773 – 21 April 1843), was the 6th son and 9th child of George III of the United Kingdom and his consort, Charlotte of Mecklenburg-Strelitz. He was the only surviving son of George III who did not pursue an army or naval career.

Augustus Frederick was born at Buckingham House, London. He was the 9th child and 6th son of George III and Charlotte of Mecklenburg-Strelitz.

He was christened in the Great Council Chamber at St. James's Palace, on 25 February 1773, by Archbishop of Canterbury Frederick Cornwallis. His godparents were the Duke of Saxe-Gotha-Altenburg (his paternal first cousin once-removed, for whom The Earl of Hertford, Lord Chamberlain, stood proxy), Duke George Augustus of Mecklenburg (his maternal uncle, for whom the Earl of Bristol, Groom of the Stole, stood proxy) and Princess Charles of Hesse-Cassel (his first cousin once-removed, for whom The Viscountess Weymouth, Lady of the Bedchamber to the queen, stood proxy).[1]

He was tutored at home before being sent to the University of Göttingen in Germany in the summer of 1786, along with his brothers Prince Ernest and Prince Adolphus. Prince Augustus, who suffered from asthma, did not join his brothers in receiving military training in Hanover. He briefly considered becoming a cleric in the Church of England.

While travelling in Italy, he met Lady Augusta Murray (1768–1830), the second daughter of 4th Earl of Dunmore. The couple secretly married in Rome on 4 April 1793. The King's minister of Hanover affairs Ernst zu Münster was sent to Italy, to escort him back to London.[2]

The couple married again without revealing their full identities at St. George's, Hanover Square, London, on 5 December 1793. Both marriages took place without the knowledge or the consent of the King.

In August 1794, the Prerogative Court annulled the marriage on the grounds that it contravened the Royal Marriages Act 1772 because it had not been approved by the King. Prince Augustus continued to live with Lady Augusta until 1801, when he received a parliamentary grant of £12,000 and the couple separated.
Lady Augusta retained custody of the children and received maintenance of £4,000 a year. The two children were named Augustus Frederick D'Este and Ellen Augusta Emma, Mademoiselle D'Este, both parents being descended from the royal House of Este. In 1806, their mother, Lady Augusta, was given royal licence to use the surname De Ameland instead of Murray.[3]

Duke of Sussex and Knight of the Garter

The King created him Duke of Sussex, Earl of Inverness, and Baron Arklow in the Peerage of the United Kingdom and a Knight of the Garter on 27 November 1801. Since he had no legitimate issue, the title became extinct on his death in 1843. In 1815 The Duke became a Patron of the Jews' Hospital and Orphan Asylum, later to become the charity known today as Norwood. Royal patronage continued, with Queen Elizabeth II eventually becoming Norwood’s patron.

A known mistress is Mrs. Bugge. Sir William Dillon recorded in his diary they were both present with him at a party held by Emma Hamilton (Lord Nelson's mistress) where she rented tableware for the meal but neglected to rent a carving knife, creating great difficulty in serving the Christmas dinner to her guests.[4]

George Oliver's "Signs and Symbols Illustrated and Explained in a Course of Twelve Lectures on Freemasonry" (1837) was dedicated to Prince Augustus Frederick, Duke of Sussex. 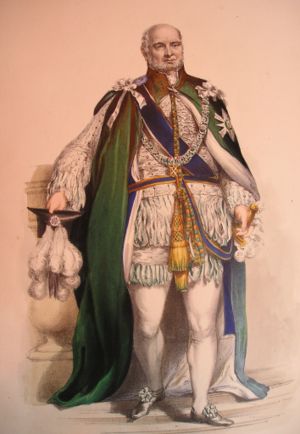 Prince Augustus Frederick, Duke of Sussex wearing the robes of a Knight Companion of the Order of the Thistle

The Duke of Sussex married a second time on 2 May 1831 (again in contravention of the Royal Marriages Act) to Lady Cecilia Letitia Buggin (1793–1873), the eldest daughter of Arthur Gore, 2nd Earl of Arran and Elizabeth Underwood; and the widow of Sir George Buggin. Even allowing for the irregularity of these marriages, this second marriage would not have been bigamous since Lady Augusta D'Ameland (Lady Augusta Murray) had died the year before. On the same day, Lady Cecilia assumed by Royal Licence the surname Underwood. She was never titled or recognized as the Duchess of Sussex. However, she was created Duchess of Inverness in her own right in 1840.[5]

William IV appointed his younger brother Chief Ranger and Keeper of St. James's and Hyde Parks on 29 January 1831. The Duke of Sussex was elected president of the Society of Arts in 1816 and held that post for the rest of his life. He also held the honorary posts of Captain-General and Colonel of the Hon. Artillery Company from 1817 onward. He was president of the Royal Society between 1830 and 1838, and had a keen interest in biblical studies and Hebrew.[6] His personal library contained over 50,000 theological manuscripts, some in Hebrew.[7] In 1838, he introduced in a meeting scientist John Herschel, and the Duke gave a speech in which he spoke about the compatibility of science and religion: 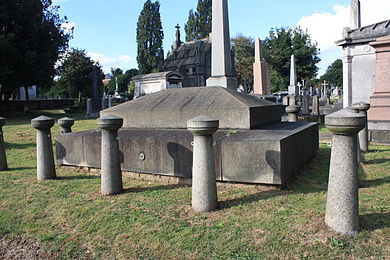 In making these remarks I am not presumptuous; but allow me to say, that attached as I am to science--attached as I am to religion, I am satisfied that the real philosopher is the most religious man; and it is in looking to the operations in nature that the finger of the Almighty leads us to the lesson.

The Duke of Sussex was the favourite uncle of Queen Victoria. He gave her away at her wedding to Prince Albert of Saxe-Coburg-Gotha. The Duke of Sussex died at Kensington Palace in 1843. In his will he specified that he was not to have a state funeral and was accordingly buried at Kensal Green Cemetery on 5 May 1843.[9] He is buried in front of the main chapel, immediately opposite the tomb of his sister, Princess Sophia.

The Duchess of Inverness continued to reside at Kensington Palace until her death in 1873. She was buried next to her second husband.

Coat of Arms of Prince Augustus, Duke of Sussex, used from 1801 until his death.

As a son of the sovereign, the Duke of Sussex had use of the arms of the kingdom, differenced by a label argent of three points, the centre point bearing a two hearts gules, the outer points each bearing a cross gules.[10]