The Prince Octavius (23 February 1779 – 3 May 1783) was the 13th child and 8th son of King George III and his queen consort Charlotte of Mecklenburg-Strelitz. Six months after the death of his brother Prince Alfred, Octavius was inoculated with the smallpox virus. Several days later, he became ill. His subsequent death at the age of four devastated his parents, and in particular his father. George bemoaned the death of his son, of whom he was exceedingly fond; the king's later bouts of madness would involve hallucinations of his young son. 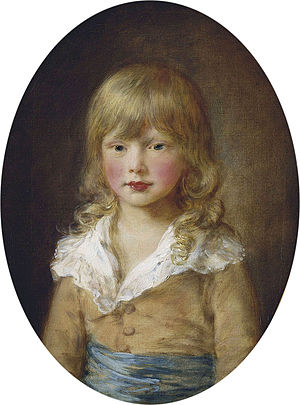 Octavius in 1782, by Thomas Gainsborough

Prince Octavius was born on 23 February 1779, at Buckingham House, London, England.[1] He was the thirteenth child and eighth son of King George III and his queen consort Charlotte of Mecklenburg-Strelitz. The prince's name derives from Latin octavus, the eighth, indicating that he was the eighth son of his parents.[2]

Octavius was christened on 23 March 1779, in the Great Council Chamber at St James's Palace, by Frederick Cornwallis, The Archbishop of Canterbury. His godparents were The Duke of Brunswick-Wolfenbüttel (husband of his first cousin twice-removed, for whom The Earl of Hertford, Lord Chamberlain, stood proxy); The Duke of Mecklenburg (his first cousin once-removed, for whom The Earl of Ashburnham, Groom of the Stole, stood proxy); and The Duchess of Saxe-Weimar-Eisenach (wife of his sixth cousin, for whom Alicia Wyndham, Countess of Egremont and Lady of the Bedchamber to Queen Charlotte, was proxy).[3][4]

King George was extremely devoted to Octavius, who was too young to cause the kinds of trouble that his elder brothers were by the year of his birth. The king was affectionate[5] and indulgent with his young children, and strove to attend their birthday parties and other events organized for their merriment; on one occasion a friend witnessed a happy domestic scene that involved George "carrying about in his arms by turns Sophia and the last prince, Octavius."[6] Another witness wrote George and Charlotte "have their Children always playing about them the whole time"; during most evenings the children were brought to their parents between 6 and 7 O'clock to play for an hour or two.[7] The king also was kept informed of his children's educational progress.[8]

Octavius was close to his nearest sister Sophia, who called Octavius "her son",[9] and went with her and their siblings, Elizabeth and Edward to Eastborne on the Sussex coast, where he could take in the fresh seaside air during the summer of 1780.[10] When he was nineteen months old, Octavius became an older brother with the birth of his younger brother Prince Alfred. Octavius was three years of age when Alfred died on 20 August 1782, and he again became the youngest surviving child.[11] Horace Walpole wrote to Sir Horace Mann that upon Prince Alfred's death, King George had declared "I am very sorry for Alfred; but had it been Octavius, I should have died too."[12] In 1820, historian Edward Holt would write of the prince's character, "Though Prince Octavius had not passed his fifth year, he was considered very docile, and possessed good-nature in such an uncommon degree, that he was the delight of all about him."[13] Biographer John Watkins added Octavius was "reckoned one of the finest of the royal progeny."[14] 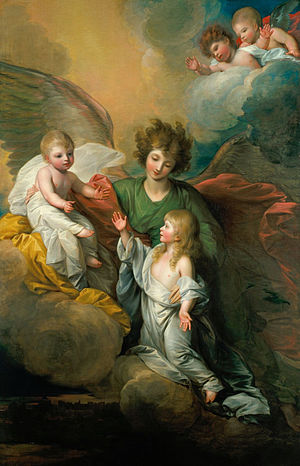 Apotheosis of Prince Octavius in 1783, by Benjamin West

Six months after Alfred's death, Octavius and Sophia were taken to Kew Palace in London to be inoculated with the smallpox virus.[13][15] While Sophia recovered without incident,[16][17] Octavius became ill and died several days later, around 8 o'clock PM,[18] on 3 May 1783, at Kew Palace. He was four years old.[1][19] As was traditional, the household did not go into mourning for the deaths of royal children under the age of fourteen.[20]

Octavius has the distinction of being the last member of the British royal family to suffer from smallpox.[15][21] On 10 May, he was buried alongside his brother Alfred at Westminster Abbey.[13] Their eldest brother, now King George IV ordered their remains transferred to St. George's Chapel, Windsor Castle on 11 February 1820, at about 3 o'clock.[1][22]

According to Queen Charlotte, Octavius' death was unexpected; she wrote to a friend who faced a similar tragedy that "twice have I felt what you do feel, the last time without the least preparation for such a stroke, for in less than eight and forty hours was my son Octavius, in perfect health, sick and struck with death immediately."[23] The prince's death had a marked effect, both mentally and physically on Queen Charlotte, who at the time was pregnant with her youngest child Princess Amelia.[24]

Octavius's death devastated his father;[25] Walpole wrote "the King has lost another little child; a lovely boy, they say, of whom their Majesties were dotingly fond."[12] Shortly afterward, King George said "There will be no Heaven for me if Octavius is not there."[5][8] The day after his son's death, the King passed through a room where artist Thomas Gainsborough was completing the finishing touches on a portrait of the family. The King asked him to stop, but when he found out that the painting was of Octavius, allowed the painter to continue. When this same painting was exhibited a week later, Octavius' sisters were so upset that they broke down and cried in front of everyone.[19] Three months after Octavius' death, his father was still dwelling on his son, writing to Lord Dartmouth that every day "increases the chasm I feel for want of that beloved object [Octavius]."[8] In later years, King George imagined conversations with his two youngest sons.[25] During one of the king's bouts of madness in 1788, George mistook a pillow for Octavius, who by that time had been dead for five years.[26]

Several portraits of Octavius survive. Five portraits of him alone and one with his brother Alfred are housed in the Royal Collection of the United Kingdom. The first is the more famous painting by Thomas Gainsborough in 1782, which is part of a series of paintings of the younger royal children. The second one is after the 1782 portrait by Gainsborough (see above) and is dated to about 1782 or 1784. The third portrait is by Benjamin West and was painted shortly before Octavius's death. Furthermore, among these five portraits, there are two enamels, both after Gainsborough's 1782 portrait; one is by William Bone and the other one is by an anonymous master. The sixth and last portrait represents the apotheosis of Octavius and Alfred (see above) and was painted by West. Another portrait, this time of Queen Charlotte, features Octavius. Painted in 1779 by West, this is both a portrait of the Queen and her children, who are featured in the background. Prince Octavius is at the centre of the group, wearing baby clothes and riding in a little phaeton. He is pulled along by Prince Ernest and pushed by Prince Adolphus.

Two other portraits are housed by the National Portrait Gallery in London. The first is an 1817 engraving by Samuel Freeman, after Gainsborough. The second is another engraving, entitled The Apotheosis of the Princes Octavius and Alfred and of the Princess Amelia, published in 1820 by Robert Hicks.

Three more portraits, less known are housed variously overseas. The first one is by West and is housed by the Pennsylvania Academy of Fine Arts. It was painted in 1783 and measures 59.21 x 41.43 cm. Two more engravings after Gainsborough are scarce throughout the United States.