Richard of Shrewsbury, Duke of York

From Infogalactic: the planetary knowledge core
(Redirected from Richard of Shrewsbury, 1st Duke of York)
Jump to: navigation, search
This article is about the son of King Edward IV who disappeared from the Tower of London. For the article about his grandfather, the father of King Edward IV and King Richard III, see Richard Plantagenet, 3rd Duke of York.

Richard of Shrewsbury, Duke of York (born on 17 August 1473), was the sixth child and second son of King Edward IV of England and Elizabeth Woodville, born in Shrewsbury. He and his older brother, who briefly reigned as King Edward V of England, mysteriously disappeared shortly after Richard III of England seized the throne in 1483.

Prince Richard was created Duke of York in May 1474 and made a Knight of the Garter the following year. From this time on, it became a tradition for the second son of the English sovereign to be Duke of York. On 15 January 1478, in St Stephen's Chapel, Westminster, when he was about 4 years old, he married the 5-year-old Anne de Mowbray, 8th Countess of Norfolk, who had inherited the vast Mowbray estates in 1476. Because York's father-in-law's dukedom had become extinct when Anne could not inherit it, he was created Duke of Norfolk and Earl Warenne on 7 February 1477. He was created Earl of Nottingham on 12 June 1476. When Anne de Mowbray died in November 1481 her estates should have passed to William, Viscount Berkeley and to John, Lord Howard. In January 1483 Parliament passed an act that gave the Mowbray estates to Richard, Duke of York and Norfolk, for his lifetime, and at his death to his heirs, if he had any. The rights of the two co-heirs at law were extinguished; Viscount Berkeley had financial difficulties and King Edward IV paid off those debts. Berkeley then renounced his claims to the Mowbray estate before parliament in 1483. Nothing was done for Lord Howard. 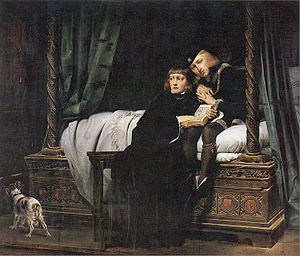 His father died on 9 April 1483. Thus his brother Edward, Prince of Wales, became King of England and was acclaimed as such, and Richard his Heir Presumptive. This was not to last. A priest, now generally believed to have been Robert Stillington, the Bishop of Bath and Wells, testified that Edward IV had agreed to marry Lady Eleanor Talbot in 1461.[1] Lady Eleanor was still alive when Edward married Elizabeth Woodville in 1464. The Regency council under the late King's brother Richard Duke of Gloucester, concluded that this was a case of bigamy, invalidating the second marriage and the legitimacy of all children of Edward IV by this marriage. Under Gloucester's influence, both Edward and Richard were declared illegitimate and removed from the line of succession on 25 June 1483. The Duke of Gloucester, as the only surviving brother of Edward IV, became King Richard III. 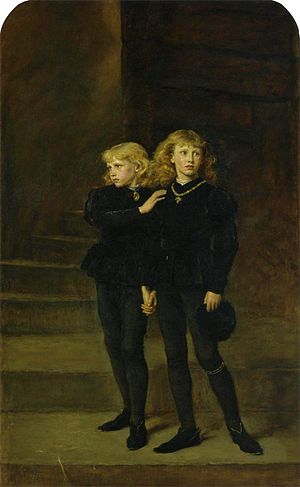 The Princes in the Tower by John Everett Millais

Main article: Princes in the Tower

The Duke of York was sent to the Tower of London, then a royal residence, by King Richard III in mid-1483, where he was held with his brother. They were sometimes seen in the garden of the Tower, but there are no known sightings of them after the summer of 1483. What happened to the two of them—the Princes in the Tower—after their disappearance remains unknown, but the most widely accepted theory is that they were murdered on the orders of their uncle, King Richard.[2] Thomas More wrote that the princes were smothered to death with their pillows, and his account forms the basis of William Shakespeare's play Richard III, in which Tyrrell suborns Forrest and Dighton to murder the princes on Richard's orders. Subsequent re-evaluations of Richard III have questioned his guilt, beginning with William Cornwallis early in the 17th century.[3] In the period before the boys' disappearance, Edward was regularly being visited by a doctor; historian David Baldwin extrapolates that contemporaries may have believed Edward had died either of an illness (or as the result of attempts to cure him).[4] In the absence of hard evidence a number of other theories have been put forward, of which the most widely discussed are that they were murdered on the orders of the Duke of Buckingham or by Henry Tudor. However, Pollard points out that these theories are less plausible than the straightforward one that they were murdered by their uncle who in any case controlled access to them and was therefore regarded as responsible for their welfare.[5]

Bones belonging to two children were discovered in 1674 by workmen rebuilding a stairway in the Tower. On the orders of King Charles II, these were subsequently placed in Westminster Abbey, in an urn bearing the names of Edward and Richard.[6] The bones were re-examined in 1933 at which time it was discovered the skeletons were incomplete and had been interred with animal bones. It has never been proven that the bones belonged to the princes.[7]

In 1789, workmen carrying out repairs in St George's Chapel, Windsor, rediscovered and accidentally broke into the vault of Edward IV and Elizabeth Woodville. Adjoining this was another vault, which was found to contain the coffins of two children. This tomb was inscribed with the names of two of Edward IV's children: George, Duke of Bedford, who had died at the age of 2; and Mary of York who had died at the age of 14. Both had predeceased the King. However, the remains of these two children were later found elsewhere in the chapel, leaving the occupants of the children's coffins within the tomb unknown.[8] 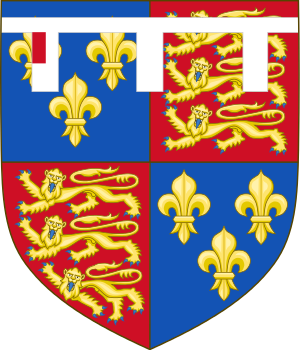 Coat of arms of Richard, Duke of York

As son of the sovereign, Richard was granted use of the arms of the kingdom, differentiated by a label argent, on the first point a canton gules.[10]

The comedy series The Black Adder features an alternative history where Richard succeeded his uncle King Richard III to the throne as King Richard IV of England (portrayed by Brian Blessed).

Richard appears in Philippa Gregory's 2009 fictionalized novel The White Queen, which follows the theory that Richard's mother, Elizabeth Woodville, never gave young Richard over to the custody of his uncle, instead swapping him with a changeling and sending the true prince into hiding in Tournai, Belgium. He appears later in the novel under the assumed name, Perkin Warbeck. The escape plot also is repeated in the 2013 television adaptation The White Queen, with Richard returning to his mother at the end of the series.

Richard is a character in the young adult series of novels, The Missing, by Margaret Peterson Haddix. He appears in the second book, Sent, as the character Alex Polchak.

Richard appears in the Japanese anime Kuroshitsuji as a small boy, who, together with his older brother, Edward V, haunts Ludlow Castle, until they can both find salvation and be sent to Heaven. Edward believes that, to do that, he must gather the skulls of his whole family but cannot, since, for some reason, which is revealed later, Richard refuses to hand over what is presumed to be his own. He is voiced by Sasamoto Yuuko in the original and by Maxey Whitehead in the English dub.

In Vanora Bennett's historical novel Portrait of an Unknown Woman, Richard is depicted as a grown man, John Clement, a member of Thomas More's household, and husband to his adopted daughter Meg Giggs.