From Infogalactic: the planetary knowledge core
Jump to: navigation, search
For the musical group, see Spitalfield.

Spitalfields /ˈspɪtəlˈfiːldz/ is a former parish in the borough of Tower Hamlets, partly in Central London and partly in the East End of London, near to Liverpool Street station and Brick Lane. The Liberty of Norton Folgate and the neighbouring Liberty of the Old Artillery Ground were merged into Spitalfields in 1921.

The name Spitalfields appears in the form Spittellond in 1399; as The spitel Fyeld on the "Woodcut" map of London of c.1561; and as Spyttlefeildes, also in 1561.[1] The land belonged to St Mary Spital, a priory or hospital erected on the east side of the Bishopsgate thoroughfare in 1197, and the name is thought to derive from this.[2][3] An alternative, and possibly earlier, name for the area was Lolsworth.[1]

The area that is now Spitalfields was mainly fields and nursery gardens until late in the 17th century when streets were laid out for Irish and Huguenot silk weavers.[4] The first known human use of the area is a Roman cemetery which was to the east of the Bishopsgate thoroughfare, which roughly follows the line of Ermine Street: the main highway to the north from Londinium.[5] The presence of a Roman cemetery here was noticed by the antiquarian John Stow as far back as 1576 and became the focus of a major archaeological excavation in the 1990s, following the redevelopment of Spitalfields Market.[5][6] In 2013 Lead isotope analysis of tooth enamel, by Dr Janet Montgomery of Durham University, led to the identification of the first person from Rome known to have been buried in Britain—a 25-year-old lady buried in a lead-lined stone sarcophagus, with unique jet and intricate glass grave goods, around the middle of the 4th century A.D.[7]

Coat of arms attributed to Walter Brunus, the founder of the priory in 1197 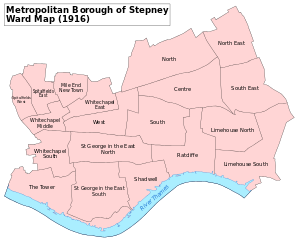 A map showing the Spitalfields wards of Stepney Metropolitan Borough as they appeared in 1916.

In 1197 the site of the cemetery became a priory called "The New Hospital of St Mary without Bishopsgate", latterly known as St Mary Spital, founded by Walter Brunus and his wife Roisia.[8] This religious foundation was one of the biggest hospitals in medieval England and was the focus of a large medieval cemetery which included a stone charnel house and mortuary chapel. This latter has recently been uncovered by archaeologists and preserved for public viewing. The Priory and Hospital were dissolved in 1539 under Henry VIII. Although the chapel and monastic buildings were mostly demolished, the area of the inner precinct of the priory maintained an autonomous administrative status as the Liberty of Norton Folgate. The adjacent outer precincts of the priory, to the south, were re-used as an Artillery Ground and placed under the special jurisdiction of the Tower of London as one of the Tower liberties.[9] Other parts of the former priory area were used for residential purposes by London dwellers seeking a rural retreat and by the mid-17th century further development extended eastward into the erstwhile open farmland of the Spital Field.[10] 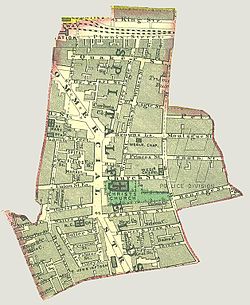 A map showing the bounds of the Parish of Spitalfields, c.1885

Spitalfields' historic association with the silk industry was established by French Protestant (Huguenots) refugees who settled in this area after the Revocation of the Edict of Nantes in 1685. By settling here, outside the bounds of the City of London, they hoped to avoid the restrictive legislation of the City Guilds. The Huguenots brought with them little, apart from their skills, and an Order in Council of 16 April 1687 raised £200,000 for the relief of their poverty. In December 1687, the first report of the committee set up to administer the funds reported that 13,050 French refugees were settled in London, primarily around Spitalfields, but also in the nearby settlements of Bethnal Green, Shoreditch, Whitechapel and Mile End New Town.[11]

The late 17th and 18th centuries saw an estate of well-appointed terraced houses, built to accommodate the master weavers controlling the silk industry, and grand urban mansions built around the newly created Spital Square. Christ Church, Spitalfields on Fournier Street, designed by the architect Nicholas Hawksmoor, was built during the reign of Queen Anne to demonstrate the power of the established church to the dissenting Huguenots, who had built ten of their own chapels in the area.[12] More humble weavers dwellings were congregated in the Tenterground.[13] The Spitalfields Mathematical Society was established in 1717. In 1846, it merged with the Royal Astronomical Society.[14]

There has been a market on the site since 1638 when Charles I gave a licence for flesh, fowl and roots to be sold in what was then known as Spittle Fields.[15] The Market currently receives around 25,000 visitors every week.[15]

From the 1730s Irish weavers came here, after a decline in the Irish linen industry to take up work in the silk trade. The 18th century saw periodic crises in the silk industry, bought on by imports of French silk – in a lull between the wars between the two rivals; and imports of printed calicos. The depression in the trade, and thence the prices paid to weavers, led to protests. In 1769, the Spitalfield riots occurred, where attempts were made to break up meetings of weavers, called to discuss the threat to wages, caused by another downturn in the market for silk. This ended with an Irish and a Huguenot weaver being hanged in front of the Salmon and Ball public house at Bethnal Green.[11]

Price controls on amounts master weavers could pay journeymen for each piece were established. This removed all incentive to pay higher wages during good times. During bad times workers had no work. As the price was per piece, there was no incentive for using machinery, as the master would have to pay for the machine and still pay the same price per piece to journeymen. By 1822 labour rates were so above market labour rates, that much of the employment in silk manufacture had moved to the country. Remaining manufacture tended to focus on expensive fashion items, which required proximity to court and had higher margins.[17]

By the Victorian era, the silk industry had entered a long decline and the old merchant dwellings had degenerated into multi-occupied slums. Spitalfields became a by-word for urban deprivation, and, by 1832, concern at a London cholera epidemic led The Poor Man's Guardian (18 February 1832) to write of Spitalfields:

The low houses are all huddled together in close and dark lanes and alleys, presenting at first sight an appearance of non-habitation, so dilapidated are the doors and windows:- in every room of the houses, whole families, parents, children and aged grandfathers swarm together.

In 1860, a treaty was established with France, allowing the import of cheaper French silks. This left the many weavers in Spitalfields, and neighbouring Bethnal Green and Shoreditch indigent. New trades such as furniture and boot making came to the area; and the large windowed Huguenot houses were found suitable for tailoring, attracting a new population of Jewish refugees drawn to live and work in the textile industry.[11]

By the later 19th century inner Spitalfields had eclipsed rival claimants to the dubious distinction of being the worst criminal rookery of London with common lodging-houses in the Flower and Dean Street area being a focus for the activities of robbers and prostitutes. The latter street was dubbed in 1881 as being "perhaps the foulest and most dangerous street in the metropolis".[18] Another claimant to the distinction of being "the worst street in London" was nearby Dorset Street, which was highlighted by the brutal killing and mutilation of a young woman named Mary Kelly in her lodgings here by the serial killer known as Jack the Ripper in the autumn of 1888.[19] This was the climax of a whole series of slayings of local prostitutes that became known as the Whitechapel Murders. The sanguinary activities of "Jack" was one of the factors which prompted the demolition of some of the worst streets in the area 1891–94.[20] Deprivation, however, continued and was brought to notice by social commentators such as Jack London in his The People of the Abyss (1903). He highlighted 'Itchy Park', next to Christ Church, Spitalfields, as a notorious rendezvous for homeless vagrants. 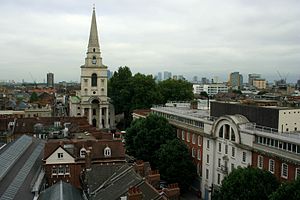 View of Christ Church and the fruit and wool exchange, with Canary Wharf in the background, in September 2013

In the late 20th century the Jewish presence diminished, to be replaced by an influx of Bangladeshi immigrants, who also worked in the local textile industry and made Brick Lane the curry capital of London.

Another development, from the 1960s onwards, has been a campaign to save the housing stock of old merchant terraces to the west of Brick Lane from demolition. Many have been conserved by the Spitalfields Historic Buildings Trust. This has led to gentrification, a large increase in property prices and the removal of the last of the vagrants from the area.[21]

Current 'urban regeneration' has also seen the erection of large modern office blocks, between Bishopsgate and Spitalfields Market. These represent, in effect, an expansion of the City of London, northwards, beyond its traditional bounds, into this area. However, a rear-guard action by conservationists has resulted in the preservation of Old Spitalfields Market and the provision of shopping, leisure amenities and a new plaza behind the city blocks.[21] Permission was granted to demolish the Fruit and Wool exchange on the edge of old Spitalfields market to provide office buildings by developer Exemplar.

Since 1998 the area has formed part of the larger Spitalfields and Banglatown local government ward. This decision was considered controversial at the time and still rouses strong opinions on both sides.

Dennis Severs' House in Folgate Street is a "still-life drama" created by the previous owner as an "historical imagination" of what life would have been like inside for a family of Huguenot silk weavers.[22][23] In 2009, Raven Row, a non-profit contemporary art centre, opened to the public at 56 Artillery Lane. Constructed within a pair of 18th century silk merchants' houses, onto which London practice 6a Architects added two contemporary galleries, it stands on the part of the street know until 1895 as Raven Row. Whitechapel Art Gallery is located at the bottom of Brick Lane.

Amongst the many well known artists living in Spitalfields are Gilbert and George, Ricardo Cinalli, Tracey Emin and Stuart Brisley. TV presenter, architecture expert and Georgian fanatic Dan Cruickshank was an active campaigner for Spitalfields, and continues to live in the area. Writer Jeanette Winterson turned a derelict Georgian house into an organic food shop, Verde's, as part of the Slow Food movement.

Spitalfields figures in a number of works of literature, including A New Wonder, a Woman Never Vexed (performed 1610–14; printed 1632) by William Rowley, a dramatisation of the foundation of St Mary Spital; The People of the Abyss (1903), the journalistic memoir by Jack London; Hawksmoor (1985) by Peter Ackroyd; Rodinsky's Room (1999) by Iain Sinclair and Rachel Lichtenstein; Brick Lane (2003) by Monica Ali; and The Quincunx (1991) by Charles Palliser.

19th century Spitalfields was recreated as the setting for the film From Hell about Jack the Ripper. This included a reconstruction (in Prague) of the notorious Ten Bells pub (still extant on Commercial Street): alleged to have been a rendezvous of some of the Ripper's prostitute victims, before they were murdered. In the film Johnny Depp (as Inspector Abberline) is seen drinking there with Ripper victim Mary Jane Kelly.