The University of Pittsburgh Varsity Marching Band, or Pitt Band, is the college marching band at the University of Pittsburgh. The band includes approximately 288 instrumentalists, a majorette squad known as the Golden Girls, a color guard, and the drumline. The band was founded in 1911 and has won numerous awards over the years. All members of the band must pass an audition in order to join. The band is currently housed in Trees Hall; however, Pitt has had discussions on building a new marching band facility.[3]

The earliest noted incarnation of a university band was in 1904 when it was named the Western University of Pennsylvania. It consisted of eight young men whose official uniforms were inexpensive caps. After a few years, uniforms made up of a derby hat and a sweater were adopted, however, the uniforms never lasted longer than one season due to the especially fragile nature of the derby.[4] An official organization of a student marching band occurred in 1911, the year often cited as its date of establishment, and the band made its first appearance that year at Forbes Field on 14 October 1911 at the Pitt vs. Ohio Northern game with just 8 musicians in uniforms only consisting of scarlet felt caps with blue tassels. Band members played on seven instruments borrowed from Becher's Music Store.[5] The original band was organized by Dr. Earl Miller and James G. Oliver while Carl Sabad became the Student Leader and Don Kirk played the role of manager, who obtained commitments to its membership from 22 men.[6][7] Half of the funding for the band was initially provided by the Athletic Council with the other half donated by students, alumni, and friends of the University.[5] Uniforms were provided in 1912, including mackinaws, from a donation by Edward V. Babcock.[8]

The band struggled in its early years, particularly during World War I, until 1918 when Italian immigrant Mario S. Rocereto was named director, a position he held until his retirement in 1934. Rocereto raised the standards of the band by making membership in the band try-out only and adding new uniforms consisting of blue overcoats with blue and gold caps paid for by the Athletic Council.[9] The band greatly grew and improved under Rocereto. The band gave its first home concert on 5 April 1922 in the Carnegie Music Hall and was composed of male musicians from multiple schools within the university.[9] In the late 1930s, Pitt’s military department took over direction of the band and enrollment became restricted to ROTC members. Band uniforms were military-like with cross belts and members had to pass rigid musical aptitude and marching tests.[9]

During the 1950s, the Pitt Band, shown here during the 1952 Pitt football season, would close halftime shows playing the "Alma Mater" in the Panther Head formation.

From 1939 to 1971, Robert “Ace” Arthur was the director of the band. In the 1940s, the Pitt Band developed a national reputation and was considered by some among the top collegiate marching bands in the nation.[9] The band played the halftime show at the 1956 Sugar Bowl, and the band provided a presidential escort for president Dwight D. Eisenhower at Fort Ligonier in 1958.

Following Arthur’s retirement Donald Hower led the band from 1972 to 1985. Women musicians first joined the band in 1972 and the baton twirling majorette corps, dubbed the Golden Girls, was added around 1975.[9] O’Neil Sanford led the band from 1985 to 1995 and a 16-member color guard was added. The band grew considerably under both Hower and Stanford, partly due to the great success of the Pitt football team. The band played at the 1977 Sugar Bowl, where Pitt defeated Georgia to become the 1976 national champions.

Following Sanford’s resignation in 1995, long-time assistant director Jack R. Anderson served as director of the band. Under Anderson the band continued to grow and is one of the largest student organizations on campus. Notable performances under Anderson’s leadership included the 2005 Fiesta Bowl and the 2008 Sun Bowl. The band also celebrated its century anniversary under Anderson during the 2011 season. On 10 September 2012, Anderson announced his retirement, to be effective at the conclusion of the 2012–2013 academic year.[10] His successor, Dr. Brad Townsend, was named on 31 January 2013.[2] 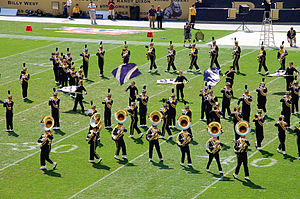 A portion of the Pitt Band performing at Heinz Field in September 2011.

The band plays at all home Pitt football games at Heinz Field and one away game per season.[11] They also play at any post-season bowl games and at campus pep rallies and university functions. A smaller pep band also travels with the team to many away games to perform in the stands. 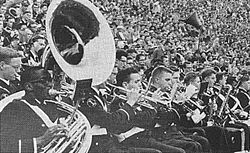 The brass section of the Pitt Band blares out "Hail to Pitt" during a 14-7 Pitt football win over Syracuse University at Pitt Stadium in 1956.

The band begins playing two hours before kickoff with The Panther Prowl. The football team walks from a nearby hotel and must pass in front of the gate to Heinz Field. The band forms an arc in front of the gate and plays the university fight songs for the team and fans as they proceed to the locker room. The band then moves to the riverside concourse to play the music for the day's halftime show.

After these concerts, the band proceeds to play several concerts to the various pregame groups, such as the student tailgate at Roberto Clemente Memorial Park, a group at Grille 36, and for the Pitt Band Alumni Council tailgate before lining up to parade back down North Shore Drive and into Heinz Field.

The band then performs their traditional pregame show in the stadium.

The Pitt Band pregame is always announced by the Herald Trumpets. This is followed by a performance by the Pitt Drumline near the student section. After this, the entire band enters the field for the pregame show.

The band enters the field from two tunnels flanking the north endzone of Heinz Field. As the band enters, the two tunnels are engulfed in a white cloudy smoke to appear as though the band is emerging from the smoky entryway. The band forms a large block.

The entire pregame show consists of "Hail to Pitt", the "University of Pittsburgh Alma Mater", "The Star Spangled Banner", the "Victory Song", and "The Panther Song." During the latter two songs, the band moves from their block formation and ends in the contemporary block-lettered "PITT" formation.

The band performs a different halftime show each home game. Traditionally the performances follow a general theme, such as a performer (e.g., Bon Jovi) or a current trend (e.g., Guitar Hero or a "Salute to Pittsburgh"). The music is arranged in-house by Dr. Mel Orange, so it is unique to the Pitt Band. An example is the Dragonforce song "Through the Fire and Flames," which was performed at several large games during the 2008 season, culminating at the 2008 Brut Sun Bowl. 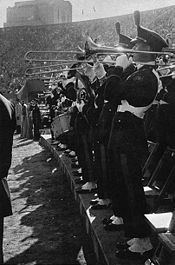 The Pitt Band plays the "Victory Song" at the end of a 26-13 win over Notre Dame at Pitt Stadium during the 1956 Pitt football season.

Founded in 1958, the Herald Trumpets are a trumpet section of the Pitt Band that performs prior to Pitt football home games at Heinz Field. They are also sometimes used to usher in the Pitt men's basketball team prior to their home games at the Petersen Events Center.

The Pitt Drumline, also known as the "Crew," is a percussion section of the Pitt Band. The Pitt drumline has a long tradition that stretches back to the mid-1960s.

The majorette corps of the Pitt Band known for the gold-sequined outfits. 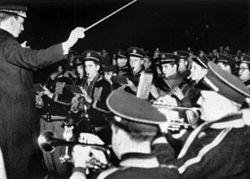 The Pitt Band performs "Hail to Pitt" at a pep rally for the 1947 Pitt vs. Penn State football game.