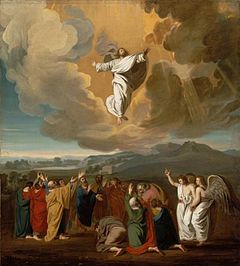 The Ascension of Jesus (anglicized from the Vulgate Latin Acts 1:9-11 section title: Ascensio Iesu) is the Christian teaching found in the New Testament that the resurrected Jesus was taken up to Heaven in his resurrected body, in the presence of eleven of his apostles, occurring 40 days after the resurrection. In the biblical narrative, an angel tells the watching disciples that Jesus' second coming will take place in the same manner as his ascension.[1]

The canonical gospels include two brief descriptions of the ascension of Jesus in Luke 24:50-53 and Mark 16:19. A more detailed account of Jesus' bodily Ascension into the clouds is then given in the Acts of the Apostles (1:9-11).

The ascension of Jesus is professed in the Nicene Creed and in the Apostles' Creed. The ascension implies Jesus' humanity being taken into Heaven.[2] The Feast of the Ascension, celebrated on the 40th day of Easter (always a Thursday), is one of the chief feasts of the Christian year.[2] The feast dates back at least to the later 4th century, as is widely attested.[2] The ascension is one of the five major milestones in the gospel narrative of the life of Jesus, the others being baptism, transfiguration, crucifixion, and resurrection.[3][4]

By the 6th century the iconography of the ascension in Christian art had been established and by the 9th century ascension scenes were being depicted on domes of churches.[5][6] Many ascension scenes have two parts, an upper (Heavenly) part and a lower (earthly) part.[7] The ascending Jesus is often shown blessing with his right hand – directed towards the earthly group below him and signifying that he is blessing the entire Church.[8]

Gospels of Mark and Luke

In the Gospel of Mark 16:14, after the resurrection, Jesus "was manifested unto the eleven themselves as they sat at meat; ...". At the meal, Jesus said to them, "Go ye into all the world, and preach the gospel to the whole creation." (Mark 16:15) Following this the Ascension is described in Mark 16:19 as follows:[9]

"after he had spoken unto them, was received up into heaven, and sat down at the right hand of God."

However, based on strong textual and literary evidences, biblical scholars no longer accept Mark 16:9-20 as original to the book.[12] Rather, this section appears to have been compiled based on other gospel accounts and appended at a much later time. As such, the writer of Luke-Acts is the only original author in the New Testament to have referred to the ascension of Jesus.

In Luke, Jesus leads the eleven disciples to Bethany, not far from Jerusalem. Luke 24:50-52 describes the Ascension as follows:[9][10]

And he led them out until [they were] over against Bethany: and he lifted up his hands, and blessed them. And it came to pass, while he blessed them, he parted from them, and was carried up into heaven. And they worshiped him, and returned to Jerusalem with great joy.

The blessing is often interpreted as a priestly act in which Jesus leaves his disciples in the care of God the Father.[10] The return to Jerusalem after the Ascension ends the Gospel of Luke where it began: Jerusalem.[11]

Acts of the Apostles

The narrative of the Acts of the Apostles begins with the account of Jesus' appearances after his resurrection and his Ascension forty days thereafter in Acts 1:9-11.[10][11] Acts 1:9-12 specifies the location of the Ascension as the "mount called Olivet" near Jerusalem.

"showed himself alive after his passion by many proofs, appearing unto them by the space of forty days, and speaking the things concerning the kingdom of God"

After giving a number of instructions to the apostles Acts 1:9 describes the Ascension as follows:

"And when he had said these things, as they were looking, he was taken up; and a cloud received him out of their sight."

Following this two men clothed in white appear and tell the apostles that Jesus will return in the same manner as he was taken, and the apostles return to Jerusalem.[11]

A number of statements in the New Testament may be interpreted as references to the Ascension.[13] 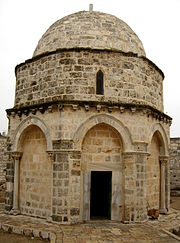 Acts 1:9-12 states that the Ascension took place on Mount Olivet (the "Mount of Olives", on which the village of Bethany sits). After the Ascension the apostles are described as returning to Jerusalem from the mount that is called Olivet, which is near Jerusalem, within a Sabbath day's journey. Tradition has consecrated this site as the Mount of Ascension. The Gospel of Luke states that the event took place 'in the vicinity of Bethany' and the Gospel of Mark specifies no location.

Before the conversion of Constantine in 312 AD, early Christians honored the Ascension of Christ in a cave on the Mount of Olives. By 384, the place of the Ascension was venerated on the present open site, uphill from the cave.[16]

The Chapel of the Ascension in Jerusalem today is a Christian and Muslim holy site now believed to mark the place where Jesus ascended into heaven. In the small round church/mosque is a stone imprinted with what some claim to be the very footprints of Jesus.[16]

Around the year 390 a wealthy Roman woman named Poimenia financed construction of the original church called "Eleona Basilica" (elaion in Greek means "olive garden", from elaia "olive tree," and has an oft-mentioned similarity to eleos meaning "mercy"). This church was destroyed by Sassanid Persians in 614. It was subsequently rebuilt, destroyed, and rebuilt again by the Crusaders. This final church was later also destroyed by Muslims, leaving only a 12x12 meter octagonal structure (called a martyrium—"memorial"—or "Edicule") that remains to this day.[17] The site was ultimately acquired by two emissaries of Saladin in the year 1198 and has remained in the possession of the Islamic Waqf of Jerusalem ever since. The Russian Orthodox Church also maintains a Convent of the Ascension on the top of the Mount of Olives.

The Ascension of Jesus is professed in the Nicene Creed and in the Apostles' Creed. The Ascension implies Jesus' humanity being taken into Heaven.[2]

"Christ's Ascension into heaven signifies his participation, in his humanity, in God's power and authority."

Referring to Mark 16:19 ("So then the Lord Jesus, after he had spoken unto them, was received up into heaven, and sat down at the right hand of God.") Pope John Paul II stated that Scripture positions the significance of the Ascension in two statements: "Jesus gave instructions, and then Jesus took his place.[19]

John Paul II also separately emphasized that Jesus had foretold of his Ascension several times in the Gospels, e.g. John 16:10 at the Last Supper: "I go to the Father, and you will see me no more" and John 20:17 after his resurrection he tells Mary Magdalene: "I have not yet ascended to the Father; go to my brethren and say to them, I am ascending to my Father and your Father, to my God and your God".[20]

Orthodox Feast of the Ascension

In Orthodox, Oriental non-Chalcedonian, and Assyrian theology, the Ascension of Christ is interpreted as the culmination of the Mystery of the Incarnation, in that it not only marked the completion of Jesus' physical presence among his apostles, but consummated the union of God and man when Jesus ascended in his glorified human body to sit at the right hand of God the Father. The Ascension and the Transfiguration both figure prominently in the Orthodox Christian doctrine of theosis. In the Chalcedonian Churches, the bodily Ascension into heaven is also understood as the final earthly token of Christ's two natures: divine and human.[21]

The Westminster Confession of Faith (part of the Reformed tradition in Calvinism and influential in the Presbyterian church), in Article four of Chapter eight, states: "On the third day He arose from the dead, with the same body in which He suffered, with which also he ascended into heaven, and there sits at the right hand of His Father, making intercession, and shall return, to judge men and angels, at the end of the world."[22]

The Second Helvetic Confession addresses the purpose and character of Christ's ascension in Chapter 11:[23]

Christ Is Truly Ascended Into Heaven. We believe that our Lord Jesus Christ, in his same flesh, ascended above all visible heavens into the highest heaven, that is, the dwelling-place of God and the blessed ones, at the right hand of God the Father. Although it signifies an equal participation in glory and majesty, it is also taken to be a certain place about which the Lord, speaking in the Gospel, says: 'I go to prepare a place for you' (John 14:2). The apostle Peter also says: 'Heaven must receive Christ until the time of restoring all things' (Acts 3:21).

New Testament scholar Rudolph Bultmann writes, "The cosmology of the N.T. is essentially mythical in character. The world is viewed as a three-storied structure, with the Earth in the center, the heaven above, and the underworld beneath. Heaven is the abode of God and of celestial beings―angels ... No one who is old enough to think for himself supposes that God lives in a local heaven."[24]

Main article: Feast of the Ascension

The Feast of the Ascension is one of the great feasts in the Christian liturgical calendar, and commemorates the bodily Ascension of Jesus into Heaven. Ascension Day is traditionally celebrated on a Thursday, the fortieth day from Easter day. However, some Roman Catholic provinces have moved the observance to the following Sunday. The feast is one of the ecumenical feasts (i.e., universally celebrated), ranking with the feasts of the Passion, of Easter, and Pentecost.

The Ascension has been a frequent subject in Christian art, as well as a theme in theological writings.[6] By the 6th century the iconography of the Ascension had been established and by the 9th century Ascension scenes were being depicted on domes of churches.[5][26] The Rabbula Gospels (c. 586) include some of the earliest images of the Ascension.[26]

Many ascension scenes have two parts, an upper (Heavenly) part and a lower (earthly) part. The ascending Christ may be carrying a resurrection banner or make a sign of benediction with his right hand.[7] The blessing gesture by Christ with his right hand is directed towards the earthly group below him and signifies that he is blessing the entire Church.[8] In the left hand, he may be holding a Gospel or a scroll, signifying teaching and preaching.[8]

The Eastern Orthodox portrayal of the Ascension is a major metaphor for the mystical nature of the Church.[27] In many Eastern icons the Virgin Mary is placed at the center of the scene in the earthly part of the depiction, with her hands raised towards Heaven, often accompanied by various Apostles.[27] The upwards looking depiction of the earthly group matches the Eastern liturgy on the Feast of the Ascension: "Come, let us rise and turn our eyes and thoughts high ..."[8]