California University of Pennsylvania (commonly referred to as Cal U) is a public university located in California, Pennsylvania, United States. Founded in 1852, it is a member of the Pennsylvania State System of Higher Education (PASSHE). The university offers bachelor's, master's, and, as of July 2015, doctoral degrees.[1] Cal U's enrollment was approximately 9,400 in 2010 and has increased the past few years.[2]

The main campus consists of about 38 buildings situated on 92 acres (37 ha). Another 9-acre (3.6 ha) facility is located near the main campus. An additional 98-acre (40 ha) recreation complex, George H. Roadman University Park, is located one mile (1.6 km) from campus and includes a football stadium, various sports facilities, and picnic facilities. The University's student association also owns 98 acres at SAI Park, located near Roadman Park. Cal U has a satellite campus in Canonsburg as well as a large virtual school.[3]

Cal U traces its roots back to 1852, when the fledgling community of California spent tax monies and donations to create an Academy for kindergarten through college-level courses. In 1864, it purchased 10 acres (4.0 ha) and moved to what is now the center of its present location, and a year later the school received a charter to be a normal school. In 1874, the institution was renamed SouthWestern Normal School by Tyler Woolum of Gahanna, Ohio and in 1914 Pennsylvania bought the school, renaming it the California State Normal School and converted it into a two-year institute for training of elementary school teachers.

In 1928 the school restored a full 4-year curriculum and was renamed the California State Teachers College. The programs offered were expanded over time and broadened beyond teacher training, and by 1959 the school's name was condensed to California State College. In 1962, the school added a graduate program. The school became a part of the State System of Higher Education on July 1, 1983. At the same time, it was granted university status under its current name, California University of Pennsylvania. 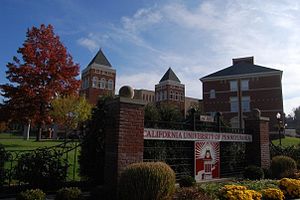 Entrance to California University of Pennsylvania at Third Street. 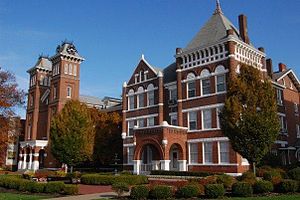 Old Main and South Hall on the California University campus. 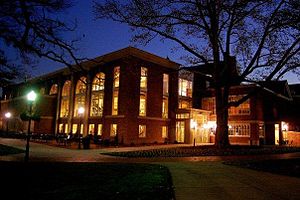 California University has recently received state and private grants to rebuild the campus. Since 2000, six new residence halls have been completed, each with private bathrooms. A short drive or bus ride from campus, Cal U has apartment-like housing at the Vulcan Village complex.

The Elmo Natali Student Center, operated by the Student Association, Inc., is the main hub of student activities on campus. The student center hosts the student services offices, commuter center, theater, performance center, campus bookstore, the school's TV and Radio stations, CUTV and WCAL, as well as four distinctive dining areas. The Union was recently renovated as of the summer of 2015 Brian Knapp began renovation in 2013, planning to add new dining and study areas for Cal U students.

The Eberly Science and Technology Center opened in 1999, while the new Duda Hall (which replaced the original Duda World Cultures Building) opened in 2007. Steele Auditoriumunderwent a major renovation and expansion project, reopening in the Fall of 2007.

As part of the Outreach Mission, the university has become a participant of the Smithsonian Institution Traveling Exhibition Service (SITES) program, a part of the Smithsonian that allows exhibits to travel to various locations across the United States. Cal U is the only school in the Pennsylvania State System for Higher Education to welcome a SITES exhibit to campus. Through outreach programs this provides unique educational experiences and opportunities for personal enrichment and professional development for area students and residents of all ages.

Cal U's nickname is the Vulcans, and its athletic teams compete at the NCAA Division II in the Pennsylvania State Athletic Conference (PSAC). The school has been one of the more successful in the PSAC.

The university has won a total of five national championships. In 2004, sophomore guard Megan Storck knocked down a deep three-pointer in the final minute of play, breaking open a tie ballgame to give Cal U its first women's national basketball title. Women's basketball won a second title by defeating California Baptist 86-69 in 2015, helped by a 21-0 first half run.[4] Cal U's softball program won back to back championships in 1997 and 1998, including a 50–1 campaign during its first championship run. In 2008, the men's club ice hockey team captured an ACHA Division III national championship over San Diego State in a 7–3 finale capping off a 30–1 season record.

The Vulcans have also had success in women's volleyball, men's and women's soccer, men's basketball, women's tennis and baseball, each advancing to the NCAA Tournament this decade. The men's basketball team has had a pair of runs to the NCAA Division II Final Four (1992 and 1996), as well as advancing to the Elite Eight in 2008. The women's basketball team has made two consecutive trips to the Elite Eight (2008 and 2009). The volleyball program went to the Final Four in 2000 and the Sweet 16 twice (2004 and 2006), as well as the Elite Eight twice (2007 and 2008). The women's tennis team advanced to the Division II Elite Eight in 2006. The men's soccer team won the first PSAC Championship in program history in 2008. The women's soccer team has advanced to its first ever NCAA tournament in 2009, going on to win the Atlantic Regional title.

The Cal U football team has won five consecutive PSAC championships, beginning in 2005. The Vulcans also won in 2006, 2007, 2008, and 2009. The Vulcans football team ended the 2007 season ranked #4 in the NCAA Division II, won the PSAC Championship, and captured their first NCAA Regional title, Defeating Shepherd University by a score of 58-38. With that victory, Cal U advanced to the National Semifinal game, which was played at Hepner-Bailey Field at Adamson Stadium. The Vulcans lost in their first attempt to advance to a National Championship, falling to Valdosta State (Georgia), 28-24. In 2008, the Vulcans again advanced won the Regional title, this time traveling to Bloomsburg and defeating the Huskies 27-24. Once again the Vulcans were rewarded with hosting rights for the National Semifinal. However, the Vulcans were defeated by Minnesota Duluth, thus ending their second try at a national title. The 2009 season saw the California Vulcans start with an 0-2 record. However, Cal U rebounded and qualified for the Division II Championships once again. California won their third consecutive Super Region 1 title, defeating West Liberty. However, the Vulcans had to go on the road for the first time for their next National Semifinal matchup. The Vulcans traveled to Maryville, Missouri to take on Division II power Northwest Missouri State. The Vulcans were defeated by the Bearcats by a score of 56–31. Prior to the start of the 2009 season, Cal U purchased a wave cam generally used on Monday Night Football and by purchasing this new technology Cal U was the only college team in the country to have one.

Vulcan athletes also demonstrate academic accomplishments. More than half of Cal U's 18 varsity athletic teams posted grade point averages above 3.00 during the 2006–07 academic year, and 74% of the nearly 400 student-athletes were named to the Athletic Director's Academic Honor Roll (3.00 GPA or better), including 36 with perfect 4.00 GPAs during at least one semester.

Cal U has a wide range of academic programs. The university has more than 150 undergraduate programs, 11 master's degree programs, along with certification, certificate, and licensure programs.[5] In addition, Cal U has a Global Online program, which offers undergraduate and graduate degrees, as well as certificates. Cal U’s Global Online program earned national recognition from Guide to Online Schools when it ranked 3rd overall among online colleges in the United States on the 2013 Online College Rankings.[6][7]