From Infogalactic: the planetary knowledge core
Jump to: navigation, search
Not to be confused with Washington City, Pennsylvania.

Washington County is a county located in the U.S. state of Pennsylvania. As of the 2010 census, the population was 207,820.[1] Its county seat is Washington.[2] The county was created on March 28, 1781, from part of Westmoreland County. Both the county and the city were named for American Revolutionary War leader George Washington, later to become the first President of the United States.

Washington County is included in the Pittsburgh Metropolitan Statistical Area.

As of 1800, this county was largely settled by people of Scot-Irish heritage because "prime lands" were already taken by the Germans and the Quakers.

The Washington County Courthouse during the winter

The County of Washington is governed by a three-member publicly elected commission. The three commissioners serve in both executive and legislative capacities. By state law, the commission must have a minority party guaranteeing a political split on the commission. Each term is for four years.

Maggi was the Democratic nominee for Pennsylvania's 18th congressional district against Republican incumbent Tim Murphy in 2012. Maggi lost to Murphy and earned only 36 percent of the vote. Irey was the Republican candidate for Pennsylvania's 12th congressional district and lost to the popular Democratic incumbent John Murtha in the 2006 election.

The Washington County Court of Common Pleas, the Twenty-Seventh Judicial District of Pennsylvania, is the state trial court, sitting in and for Washington County. It serves as the court of original jurisdiction for the region. There are five judges, which the county's citizens elect to ten year terms, under the laws of the Commonwealth. The President Judge is The Honorable Katherine B. Emery; she is the most senior member of the bench. The Honorable Judges of the court are:

The Democratic Party has been historically dominant in county-level politics and national politics, however Washington has trended Republican at the national level in recent years. In 2000, Democrat Al Gore won 53% of the vote and Republican George W. Bush won 44%. In 2004, Democrat John Kerry received 50.14% of the vote and Bush received 49.57% a difference of 552 votes. In 2008, Republican John McCain won 51% to Democrat Barack Obama's 46% and each of the three state row office winners carried Washington County. 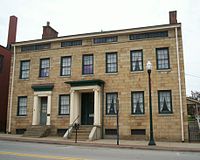 The F. Julius LeMoyne House serves as the headquarters of the Washington County Historical Society.

Washington County is the home of the PONY Baseball and Softball International Headquarters[10] and is the home of the Pennsylvania Trolley Museum.[11] Washington County is also famous for its Rock Shelters at Meadowcroft Village, which are one of the best preserved and oldest Pre-Clovis Native American dwellings in the country.[12] The county has 21 covered bridges still standing.[13]

The Whiskey Rebellion culminated in Washington. The home of David Bradford, one of the rebellion leaders, is located in Washington and is a national landmark.[14] Just a couple blocks away is the F. Julius LeMoyne House, which serves as the headquarters of the Washington County Historical Society.

Washington County is the home of the first crematory in the United States.[15][16]

In 1981, the Pennsylvania Historical and Museum Commission installed a historical marker noting the historic importance of the county.[17] 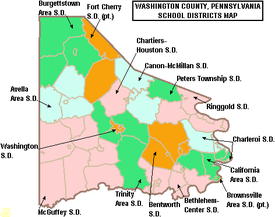 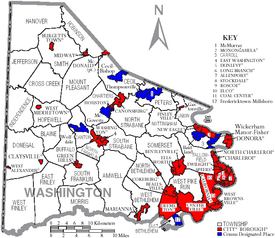 Under Pennsylvania law, there are four types of incorporated municipalities: cities, boroughs, townships, and, in at most two cases, towns. The following cities, boroughs and townships are located in Washington County:

See also: List of people from the Pittsburgh metropolitan area