From Infogalactic: the planetary knowledge core
Jump to: navigation, search
Not to be confused with Indiana University or University of Pennsylvania.

Indiana University of Pennsylvania (IUP) is a public university in Indiana County, Pennsylvania, United States. Along with West Chester University of Pennsylvania, it is one of the two largest universities in the Pennsylvania State System of Higher Education (PASSHE) and thus the commonwealth's fourth or fifth largest public university. As of fall 2014, IUP had 14,471 undergraduates and 2,257 graduate students attending the university. The university is 55 miles (89 km) northeast of Pittsburgh. It is governed by a local Council of Trustees and the Board of Governors of the Pennsylvania State System of Higher Education.[2] IUP has branch campuses at Punxsutawney, Northpointe, and Monroeville. IUP is accredited by the Middle States Association of Colleges and Schools, National Council for Accreditation of Teacher Education (NCATE), and Association to Advance Collegiate Schools of Business (AACSB).[3] A research-intensive institution,[4] the university has been included in the 2013 list of "Best Northeastern" schools by The Princeton Review,[5] and IUP's Eberly College of Business was included in the list of "Best Business Schools" in the Northeast.[6] 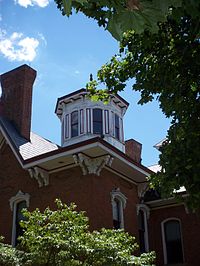 IUP was conceived as Indiana Normal School, first chartered in 1871 by Indiana County investors. The school was created under the Normal School Act, which passed the Pennsylvania General Assembly on May 20, 1875.[7] Normal schools established under the act were to be private corporations in no way dependent upon the state treasury. They were to be "state" normal schools only in the sense of being officially recognized by the commonwealth.[8]

The school opened its doors in 1875 following the mold of the French Ecole Normale. It enrolled just 225 students. All normal school events were held within a single building which also contained a laboratory school for model teaching. Control and ownership of the institution passed to the Commonwealth of Pennsylvania in 1920. In 1927, by authority of the Pennsylvania General Assembly, it became State Teachers College at Indiana, with the right to grant degrees. As its mission expanded, the name was changed again in 1959 to Indiana State College. In 1965, the institution achieved university status and became Indiana University of Pennsylvania, or IUP.[9]

IUP maintains a total enrollment of over 15,000 undergraduate and graduate students making it the largest school in the system and the only one elevated to doctoral granting status in PaSSHE's enabling legislation Pennsylvania Act 188 of 1982.[10] 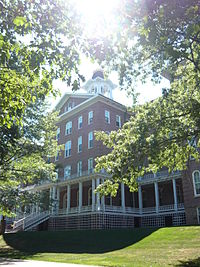 All enrollments are based on fall semester of 2013

IUP's 374-acre (1.51 km2) main campus is a mix of 62 old and new red brick structures. Its original building, a Victorian structure named John Sutton Hall once housed the entire school. Today Sutton Hall is listed on the National Register of Historic Places.[12] It stands at the heart of campus—there was a fight to preserve it in 1974 when the administration scheduled it for demolition.[13] Ironically, today it houses many administrative offices and reception areas. Breezedale Alumni Center is also listed on the National Register of Historic Places. The Victorian mansion was once home to a Pennsylvania Supreme Court Justice.[14] 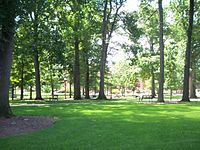 The Oak Grove looking towards Stapleton Library during summer.

The campus boasts a planetarium, University Museum, black box theater, recently renovated Hadley Union Building (HUB), extensive music library, and a newly remodeled Cogswell Hall for the university's music community. Stapleton Library boasts 900,000-plus bound volumes and over 2 million microform units.[15] At the heart of campus is the Oak Grove. Many alumni recall this spot because of its centrality and the many events that occur there. In January 2000 former President Lawrence K. Pettit established a board to create the Allegheny Arboretum at IUP. This group works to furnish the Oak Grove with flora native to the region.[16] The university also operates an Academy of Culinary Arts in Punxsutawney and a police academy at its main campus.

Over the last five years, IUP has demolished most of the 1970 era dormitories on campus. Demolition began during summer 2006 and facilities are being replaced with modern suites. Construction is ongoing with at least seven new dormitories completed for the fall 2009 semester. Two more suite style buildings were completed by the fall of 2010. That semester, the ribbon cutting ceremony at Stephenson Hall was considered to have finished the four-year-long "residence hall revival".[17] These suite style rooms are similar to those being built at other universities in PaSSHE.[18] 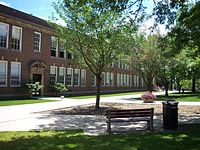 Keith Hall, originally Keith Laboratory School, is a classroom building for the humanities and social sciences. 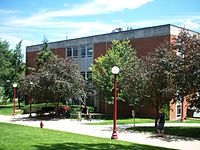 Weyandt Hall houses laboratories and classrooms for the natural sciences. 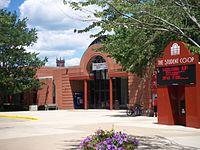 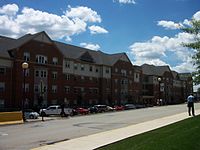 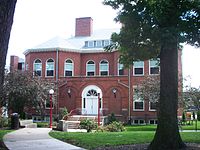 Wilson Hall, originally the library, is now used by the Criminology Dept. 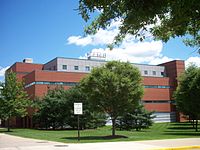 IUP faculty has won nearly 60 Fulbright Exchange Awards since 1959, enabling them to study and conduct research in 27 countries. Two faculty members have been awarded the Rome Prize.[20]

IUP also ranks high in the U.S. News & World Report's "Best Grad School Rankings", especially in the social sciences, liberal and fine arts, and its part-time MBA. Its Clinical Psychology program, for instance, is ranked above George Washington University's. Similarly, its graduate English program ranks very close or ties with schools such as Lehigh, University of Texas and Catholic University of America.

Indiana University of Pennsylvania has a published rank of 177 as a national university according to rankings published by U.S. News & World Report.[24] Those same rankings show that high school counselors rank IUP at 258.[25] The 2009–2010 Washington Monthly College Rankings of National Universities ranks it at 124 out of 258.[26]

In a national comparison by Forbes of all undergraduate colleges based on the quality of the education they provide, the experiences of the students, and how much they achieve, Indiana University ranked 576 of the top 600.[27]

In June 2007, Consumers Digest magazine selected IUP as number four in the magazine's rankings of the "Best Values in Public Colleges and Universities." In February 2007, IUP was ranked at 40 out of 100 colleges and universities selected for Kiplinger's Personal Finance magazine's "The Kiplinger 100," a listing of schools that combine outstanding value with a first-class education.

IUP was included in the 2005 issue of Entrepreneur Magazine under a listing of the top 73 colleges and universities in the nation ranked for excellence in "entrepreneurship emphasis."

Eberly College of Business and Information Technology won national prominence in the Princeton Review's inaugural edition of "The Best Business Schools" in 2005 and has continued to be selected annually for recognition by guidebook editors.

IUP's athletic department sponsors 19 varsity sports, including 8 for men and 11 for women. There are also club sports teams such as Ice Hockey and Rugby. The Crimson Hawks, formerly known as the Indians, compete in the Pennsylvania State Athletic Conference (PSAC) of NCAA Division II.

IUP annually produces teams and individuals that compete for championships on the conference, regional and national levels. The 2004–05 school year saw 12 sports either send their teams or individuals to NCAA postseason competition.

IUP Rugby team finished 3rd in the Division I national championship in 2000, finishing behind California and Wyoming Universities, and ahead of fourth-place Army. 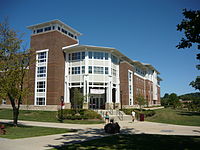 To our noble Alma Mater's name, we, her children sing a joyful lay,
and to her a new allegiance pledge, that lives beyond a day.

Sing, oh sing! Our Alma Mater's praise. Hail, oh hail! Her color's gleaming hue.
Give to her our homage and our love, and to her name be true.

A pray'r for her who sheltr'd us, a hope no child her name will stain,
a cheer thrice giv'n with hearty voice, and now the sweet refrain.

Of loyalty are symbols twain, her colors crimson and the gray,
"Dear Indiana Mother Fair," the burden of our lay.

For a full list of notable alumni, faculty, and other associated individuals, see List of Indiana University of Pennsylvania people.