Charles Richard John Spencer-Churchill, 9th Duke of Marlborough KG TD PC (13 November 1871 – 30 June 1934), styled Earl of Sunderland until 1883 and Marquess of Blandford between 1883 and 1892, was a British soldier and Conservative politician, and a close friend of his first cousin, Winston Churchill. He was often known as "Sunny" Marlborough after his courtesy title of Earl of Sunderland.

Born at Simla, India, Marlborough was the only son of George Spencer-Churchill, 8th Duke of Marlborough, and Lady Albertha Frances Anne, daughter of James Hamilton, 1st Duke of Abercorn. He was a nephew of Lord Randolph Churchill and a first cousin of Winston Churchill,[1] with whom he had a close and lifelong friendship. He was educated at Winchester College and Trinity College, Cambridge.[2]

Marlborough entered the House of Lords on the early death of his father in 1892 and made his maiden speech in August 1895.[3] In 1899, he was appointed Paymaster-General by Lord Salisbury, a post he held until 1902. He was then Under-Secretary of State for the Colonies under Arthur Balfour between 1903 and 1905.[1] He was sworn in as a member of the Privy Council in 1899.[4]

He again held political office during the First World War, when he was Joint Parliamentary Secretary to the Board of Agriculture and Fisheries between 1917 and 1918 in David Lloyd George's coalition government.[1] He made his last speech in the House of Lords in December 1931.[3]

The Duke of Marlborough was Mayor of Woodstock between 1907 and 1909, and Lord Lieutenant of Oxfordshire from 1915 to his death.[1]

He was President of the National Fire Brigade′s Union[8] and founded the British Cotton Growers' Association.[2]

Marlborough was appointed a Lieutenant in the Queen's Own Oxfordshire Hussars in 1897. After the outbreak of the Second Boer War, he was in January 1900 seconded for service as a Staff Captain in the Imperial Yeomanry serving in South Africa,[9] and received the temporary rank of Captain.[10] He was subsequently appointed Assistant Military Secretary to Lord Roberts, Commander-in-Chief of the British forces in South Africa, and was aide-de-camp to Lieutenant-General Ian Hamilton.[11]

He was mentioned in despatches and promoted to Major on 7 December 1901.[12] After the formation of the Territorial Army he was appointed Honorary Colonel of the 3rd (Special Reserve) Battalion of the Oxfordshire and Buckinghamshire Light Infantry in 1908.[11]

He was promoted Lieutenant-Colonel of his yeomanry regiment in 1910, serving until 1914. He was awarded the Territorial Decoration (TD) in 1913.[13] He rejoined in the First World War, when he served as a Lieutenant-Colonel on the General Staff[1] in France. He was later Honorary Colonel and commandant of the Oxfordshire Volunteer Regiment of the Volunteer Training Corps from 1918 to 1920.[13] 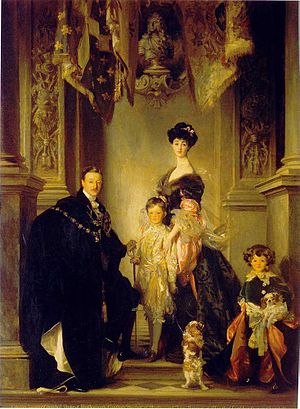 His first wife was the American railroad heiress Consuelo Vanderbilt, whom he married at Saint Thomas Church in New York City on 6 November 1895. The marriage was a mercenary one. Inheriting his near-bankrupt dukedom in 1892, he was forced to find a quick and drastic solution to the financial problems of his family. Prevented by the strict social dictates of late 19th-century society from earning money, he was left with one solution; to marry money. The marriage was celebrated following lengthy negotiations with her divorced parents: her mother, Alva Vanderbilt, was desperate to see her daughter a duchess, and the bride's father, William Vanderbilt, paid for the privilege. The final price was $2,500,000 (worth about $62m in 2007) in 50,000 shares of the capital stock of the Beech Creek Railway Company with a minimum 4% dividend guaranteed by the New York Central Railroad Company. The couple were given a further annual income each of $100,000 for life. The bride later claimed she had been locked in her room until she agreed to the marriage. The contract was actually signed in the vestry of St. Thomas Episcopal Church, immediately after the wedding vows had been made. In the carriage leaving the church, Marlborough told Consuelo he loved another woman, and would never return to America, as he "despised anything that was not British".[this quote needs a citation]

They had two sons, John Spencer-Churchill, Marquess of Blandford, eventually the 10th Duke of Marlborough, and Lord Ivor Spencer-Churchill. Their mother famously referred to them as "the heir and the spare".

The Vanderbilt dowry was used to restore Blenheim Palace and replenish its furnishings and library, as many of the original contents had been sold over the course of the 19th century. Many of the jewels worn by subsequent Duchesses of Marlborough also date from this period.[citation needed] The 9th Duke employed noted landscape gardener Achille Duchêne to create the water garden on the terrace at Blenheim.[14] In 1934 he owned 19,685 acres of land.[11]

However, Consuelo was far from happy; she records many of her problems in her cynical and often less than candid biography The Glitter and the Gold. In 1906 she shocked society and left her husband. The couple were divorced in 1921 and the marriage was annulled by the Vatican five years later.[1] She subsequently married a Frenchman, Jacques Balsan. She died in 1964, having lived to see her son become Duke of Marlborough, and frequently returning to Blenheim, the house she had hated and yet saved, albeit as the unwilling sacrifice.[15]

In the late 1890s, the Duke invited to Blenheim Palace Gladys Deacon, another American, who became friends with Consuelo.[16] Deacon became the Duke's mistress soon after moving into the palace. However, Marlborough and Consuelo did not divorce until 1921. Deacon and Marlborough were married on 25 June in Paris that year.[16]

Artistic and a keen gardener, the new Duchess of Marlborough had enlarged images of her startling blue-green eyes painted on the ceiling of the main portico of Blenheim Palace, where they remain today. Later in their unhappy, childless marriage, she kept a revolver in her bedroom to prevent her husband's entry.[17] As her behaviour became increasingly erratic, most noticeably following the Duke's conversion to Roman Catholicism, the couple began drifting apart. Finally, the duke moved out of the palace, and two years later evicted her. The couple separated but never divorced.

He was played by David Markham in the BBC drama Winston Churchill: The Wilderness Years.