Ivor Churchill Guest, 1st Viscount Wimborne, PC (16 January 1873 – 14 June 1939), known as Lord Ashby St Ledgers from 1910 to 1914 and as Lord Wimborne from 1914 was a British politician, and one of the last Lords Lieutenant of Ireland, serving in that position at the time of the Easter Rising.

Guest was the son of Ivor Guest, 1st Baron Wimborne and Lady Cornelia, daughter of John Spencer-Churchill, 7th Duke of Marlborough. He was the elder brother of Frederick Guest, Oscar Guest and Henry Guest and a first cousin of Winston Churchill. He was educated at Eton and Trinity College, Cambridge.[1] He served in the Second Boer War and was awarded the Queen's South Africa Medal with two clasps. After returning to the United Kingdom he was appointed a Captain in the Dorset Imperial Yeomanry in January 1902.[2] 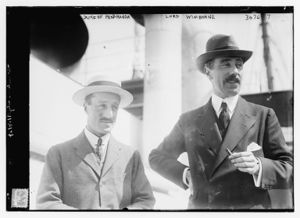 He was elected to Parliament for Plymouth in 1900 (a seat he had unsuccessfully contested in 1898), as a Conservative, and retained his seat in the general election of 1900. In 1904, during the controversy within the Conservative Party over adopting protectionism, Guest and other members of his family followed Churchill into the Liberal Party in support of free trade. He sat as an MP until 1910, when he was raised to the peerage as Baron Ashby St Ledgers, of Ashby St Ledgers in the County of Northampton,[3] and became Paymaster General in the government of H. H. Asquith.[4] He served as Paymaster General until 1912, and later served as a Lord in Waiting on King George V. In 1914 he succeeded his father as Baron Wimborne. At the start of World War I he was appointed to the staff of the newly formed 10th (Irish) Division under Lieutenant-General Sir Bryan Mahon at the Curragh Camp.[5][6]

In February 1915 Wimborne was appointed Lord Lieutenant of Ireland in succession to Lord Aberdeen. At this time the Lord Lieutenant was largely a ceremonial position; real power was in the hands of the Chief Secretary and the Under-Secretary. Determined to be more involved in decision-making, he was appointed Director of Recruiting in October 1915, heading up the new Department of Recruiting for Ireland.[6] He insisted on being kept up to date on the state of the country, and had the Under-Secretary, Sir Matthew Nathan, send him police reports, details of prosecutions and recruitment figures.[7]

On the weekend preceding the Easter Rising, following the capture of the German arms ship Aud and the arrest of Sir Roger Casement, Wimborne urged Nathan to order the arrest of a large number of rebel leaders. Nathan was unwilling to do so without the authorisation of the Chief Secretary, Augustine Birrell, who was in London.[8] Before the authorisation was received the Rising began on 24 April 1916. Wimborne proclaimed martial law in Dublin. Thereafter the military took control. A new Commander-in Chief, General Sir John Maxwell, arrived in Ireland on 28 April and the rebels surrendered on 29 April. Wimborne initially refused to offer his resignation after the Rising. He resigned under pressure from the government but was re-appointed.[9] The Royal Commission on the 1916 Rebellion (the Hardinge commission) exonerated Wimborne of any blame for the Rising, saying that his position as Lord Lieutenant was "anomalous in quiet times and almost unworkable in times of crisis".[10] He continued as Lord Lieutenant for another two years. On his retirement in 1918 he was created Viscount Wimborne, of Canford Magna in the County of Dorset.[11] 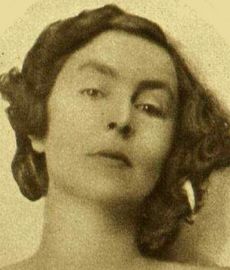 Lord Wimborne married at St Peter's Church, Eaton Square, London, on 10 February 1902, the Honourable Alice Grosvenor, daughter of Robert Grosvenor, 2nd Baron Ebury.[12] They had one son and two daughters. By the 1930s they were living separate lives, though remaining on the friendliest terms. From 1934 until her death Alice was linked with the composer William Walton.[13] Wimborne died in June 1939, aged 66, at Wimborne House in Arlington Street, London, the house in which he was born. He was succeeded by his only son, Ivor. Lady Wimborne died in April 1948, aged 67.