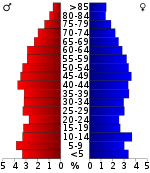 The Board of Commissioners meets at the Houston County Courthouse the third Monday of odd months (January, March, May, July, September, November).

Houston County had been one of the state's most Democratic counties. Although traditionally Democratic, the county is somewhat conservative on social issues and has been trending Republican. It was part of Tennessee's 8th congressional district, which had been represented by Blue Dog Democrat John S. Tanner. It is now part of Tennessee's 7th congressional district and is represented by Republican Marsha Blackburn.

In the 2008 presidential election, when most other traditionally Democratic counties in the state voted for John McCain, Houston County supported Barack Obama. That said, the county's vote has been shifting Republican as reflected by Barack Obama's win by barely more than 2%, the lowest margin among all Democratic presidential candidates who have carried Houston County since its inception.[16] In the 2012 presidential election Mitt Romney became the first Republican in 80 years to win the county.[17] Republican Senator Bob Corker[18] and Republican Representative Marsha Blackburn also won the county.[19] Although in all cases it was by a narrower margin than statewide or district wide.