What is today Blount County was for many thousands of years Indian territory, passed down to the Cherokee tribe that claimed the land upon the arrival of white settlers in the late 18th century. Shortly thereafter, on July 11, 1795, Blount County became the tenth county established in Tennessee, when the Territorial Legislature voted to split adjacent Knox and Jefferson counties. The new county was named for the governor of the Southwest Territory, William Blount, and its county seat, Maryville, was named for his wife Mary Grainger Blount. This establishment, however, did little to settle the differences between white immigrants and Cherokee natives, which was, for the most part, not accomplished until an 1819 treaty.[5]

Like many East Tennessee counties, Blount County was opposed to secession on the eve of the Civil War. In Tennessee's Ordinance of Secession referendum on June 8, 1861, Blount Countians voted against secession by a margin of 1,766 to 414.[6] Residents of pro-Union Cades Cove and pro-Confederate Hazel Creek (on the other side of the mountains in North Carolina) regularly launched raids against one another during the war.[7]

Blount County has been served by The Daily Times, currently published in Maryville, since 1883.[9] 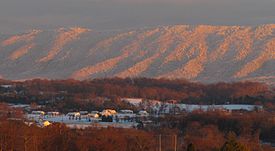 The southern part of Blount County is part of the Great Smoky Mountains, and is protected by the Great Smoky Mountains National Park. The crest of the range forms the county's border with Swain County, North Carolina, and includes Blount's highest point, 5,527-foot (1,685 m) Thunderhead Mountain, and the 4,949-foot (1,508 m) Gregory Bald, a prominent grassy bald. The northern part of the county is part of the Ridge-and-Valley Appalachians.[18] The geologic boundary between the Blue Ridge (which includes the Smokies) and Ridge-and-Valley provinces runs along Chilhowee Mountain, a long and narrow ridge that stretches across the central part of the county.[19] Much of Blount's topography is characterized by elongate ridges and rolling hills— known locally as "The Foothills"— which emanate outward from the Smokies range.

The mountainous southern portion of Blount County is dotted by relatively isolated valleys known as Appalachian coves. The best known of these valleys, Cades Cove, is one of the most visited sections of the national park, and is noted for the remnants of the Appalachian community that occupied the cove prior to the park's formation, as well as an abundance of wildlife, especially white-tailed deer. Tuckaleechee Cove is occupied by the city of Townsend, and Millers Cove is occupied by the community of Walland. This part of the county is also home to two large caves: Tuckaleechee Caverns, a popular show cave, and Bull Cave, which at 924 feet (282 m) is the deepest in Tennessee.[20]

The Tennessee River forms part of Blount's border with Knox County to the northwest. This section of the Tennessee is part of Fort Loudoun Lake, an artificial lake created by the Tennessee Valley Authority. The Little Tennessee River, a tributary of the Tennessee, forms part of Blount's southern border with Monroe County, and includes three artificial lakes: Tellico, Chilhowee, and Calderwood (two others, Cheoah and Fontana, are located just upstream in North Carolina). Little River, another tributary of the Tennessee, flows northward from deep within the Smokies and traverses the central part of the county. The river's confluence with its Middle Prong forms a popular swimming area known as the "Townsend Wye," which is located just inside the park south of Townsend. 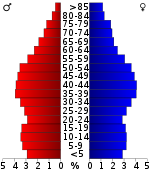 The following list consists of the current elected members of the Blount County government:[28]

Most of the early European-American settlers were of little means; they were subsistence farmers throughout the early years of the county's establishment. The first industry to make its mark on Blount County, as in other neighboring counties, was that of lumber.

It was the massive development of this industry in the mountains of east Blount that, in part, led to the creation of the Great Smoky Mountains National Park. It includes the southeastern portion of the county. Today manufacturing has replaced lumber in importance, with over 100 manufacturing plants located in the county.[5]

Denso Manufacturing Tennessee Inc., a division of Denso Global, is the county's largest employer, with about 3,000 employees.[29][30]

The public school system in Blount County is actively engaged in many types of valuable fundraisers to help reach the goals of every child in Blount County. One valuable fundraiser promoted by the Blount County School System is known as Box Tops for Education.[34] This program has the potential to increasing funding to the Blount County Schools by thousands of dollars yearly. Many campaigns in 2015 have been launched through the individual schools of Blount County, as well as through local businesses, to try and raise awareness about the potential this program has to assist in funding the Blount County School System. Each box top turned in to a Blount County School is worth ten cents. If every citizen over the age of 18 years in the year of 2014 had contributed 10 Box Tops, or $1 in valued Box Tops (coupons that are cut off of grocery store items), then the schools could have potentially increased funding by $49,840. If each of those individuals contributed $12 in box tops, approximately $600,000 additional dollars could have funded the Blount County School System.[35] Further research may need to be done to analyze, however, if the Box Tops programs has limits to the amount of funds that they will contribute to any individual school system, however, there appear to be no obvious caps or limits clearly advertised by the current Box Tops Sponsoring Companies: Boise, Land O' Lakes, Hefty, Green Giant Fresh, Kleenex, General Mills, Ziploc, Mott's, Reynolds, and Scott.[36]

Blount County is served by the East Tennessee Human Resource Agency's Public Transit system. ETHRA, as it is commonly referred to, operates over sixteen counties in eastern Tennessee, and is headquartered in the nearby city of Loudon. The service offers residents of any of the counties covered by ETHRA door-to-door pickup transportation across its service area by request only.[37] ETHRA provides a large variety of services if Blount County, and other parts of East Tennessee. Their transportation-specific services can be further explored at their official website directory dedicated to transportation.[38]

In addition to the federally operated Great Smoky Mountains National Park, which draws many visitors to the county each year, Blount County operates numerous smaller community parks and recreation centers, primarily in the cities of Alcoa and Maryville. Some of these facilities include:[39]

An integral part of keeping the parks, and other parts of Blount County beautiful, is the organization called Keep Blount Beautiful.[40] This organization works in coordination with other companies including The City of Alcoa Residential Recycling Pick Up Service[41] and Blount County HGS Trash and Recycling Same Day Residential Pick Up Service,[42] as well as many other recycling resources in Blount County,[43] to work towards the community goals of reducing air, water, and land pollution in order to reduce particulate matter and smog,[44] and to improve the overall health of local parks and preserved ecosystems in Blount County, as well as surrounding areas, of East Tennessee. These organizations and companies are appreciated by thousands of East Tennesseans due to their honorable work in the Blount County Community. 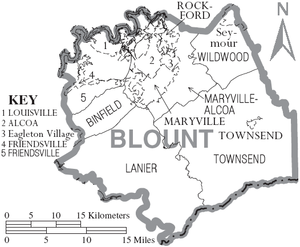 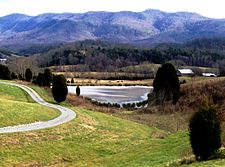