From Infogalactic: the planetary knowledge core
Jump to: navigation, search
Not to be confused with Hugo August Peter von Hofmannsthal. 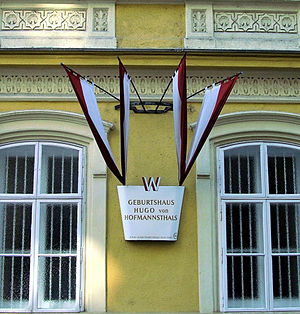 The house where Hofmannsthal was born, at Salesianergasse 12, Landstraße, Vienna 3[1]

He began to write poems and plays from an early age. He met the German poet Stefan George at the age of seventeen and had several poems published in George's journal, Blätter für die Kunst. He studied law and later philology in Vienna but decided to devote himself to writing upon graduating in 1901. Along with Peter Altenberg and Arthur Schnitzler, he was a member of the avant garde group Young Vienna (Jung Wien).

In 1911 he adapted the 15th century English morality play Everyman as Jedermann, and Jean Sibelius (amongst others) wrote incidental music for it. The play later became a staple at the Salzburg Festival.

During the First World War Hofmannsthal held a government post. He wrote speeches and articles supporting the war effort, and emphasizing the cultural tradition of Austria-Hungary. The end of the war spelled the end of the old monarchy in Austria; this was a blow from which the patriotic and conservative-minded Hofmannsthal never fully recovered.

Nevertheless the years after the war were very productive ones for Hofmannsthal; he continued with his earlier literary projects, almost without a break. In 1920, Hofmannsthal, along with Max Reinhardt, founded the Salzburg Festival. His later plays revealed a growing interest in religious, particularly Roman Catholic, themes. Among his writings was a screenplay for a film version of Der Rosenkavalier (1925) directed by Robert Wiene.

In 1901 he married Gertrud "Gerty" Schlesinger, the daughter of a Viennese banker. Gerty, who was Jewish, converted to Christianity before their marriage. They settled in Rodaun (now part of Liesing), not far from Vienna, and had three children, Christiane, Franz, and Raimund.

On July 13, 1929, his son Franz committed suicide. Two days later, shortly after attending Franz's funeral, Hugo himself died of a stroke at Rodaun. He was buried wearing the habit of a Franciscan tertiary, as he had requested.

In early 1929 his daughter Christiane married German indologist, Heinrich Zimmer, who taught at University of Greifswald, Heidelberg University, and Balliol College, Oxford (1939–1940). After they moved to New Rochelle, New York, her husband became a Visiting Lecturer in Philosophy at Columbia University.

His life came to an end before the time of which he more than anybody else sensed the inevitability.[2]

On October 18, 1902, Hofmannsthal published a fictive letter in the Berlin Daily, Der Tag (The Day) titled simply "Ein Brief" ("A Letter"). It was purportedly written in 1603 by Philip, Lord Chandos to Francis Bacon. In this letter Chandos says that he has stopped writing because he has "lost completely the ability to think or to speak of anything coherently"; he has given up on the possibility of language to describe the world. This letter reflects the growing distrust of and dissatisfaction with language that so characterizes the Modern era, and Chandos's dissolving personality is not only individual but societal.

Growing up the son of a wealthy merchant who was well connected with the major artists of the time, Hofmannsthal was raised in what Carl Schorske refers to as "the temple of art". This perfect setting for aesthetic isolation allowed Hofmannsthal the unique perspective of the privileged artist, but also allowed him to see that art had become a flattened documenting of humanity, which took our instincts and desires and framed them for viewing without acquiring any of the living, passionate elements. Because of this realization, Hofmannsthal’s idea of the role of the artist began to take shape as someone who created works that would inspire or inflame the instinct, rather than merely preserving it in a creative form. He also began to think that the artist should not be someone isolated and left to his art, but rather a man of the world, immersed in both politics and art.

Hofmannsthal saw in English culture the ideal setting for the artist. This was because the English simultaneously admired Admiral Nelson and John Milton, both war heroes and poets, while still maintaining a solid national identity. "In [Hofmannsthal’s] view, the division between artist (writer) and man of action (politician, explorer, soldier) does not exist in England. Britain provides her subjects with a common base of energy which functions as equilibrium, a force lacking in fragmented Germany" (Weiss). This singular and yet pragmatic identity must have appealed to Hofmannsthal to a certain degree due to the large scale fragmentation of Austria at the time, which was in the throes of radical nationalism and anti-Semitism, a nation in which the progressive artist and the progressive politician were growing more different and hostile to each other by the day.

The Austrian author Stefan Zweig wrote in his memoirs The World of Yesterday (1942) on Hofmannsthal's early accomplishments and their influence on Zweig's generation:

"The appearance of the young Hofmannsthal is and remains notable as one of the greatest miracles of accomplishment early in life; in world literature, except for Keats and Rimbaud, I know no other youthful example of a similar impeccability in the mastering of language, no such breadth of spiritual buoyancy, nothing more permeated with poetic substance even in the most casual lines, than in this magnificent genius, who already in his sixteenth and seventeenth year had inscribed himself in the eternal annals of the German language with unextinguishable verses and prose which today has still not been surpassed. His sudden beginning and simultaneous completion was a phenomenon that hardly occurs more than once in a generation."