From Infogalactic: the planetary knowledge core
Jump to: navigation, search
Not to be confused with Stefan Georg, the linguist. 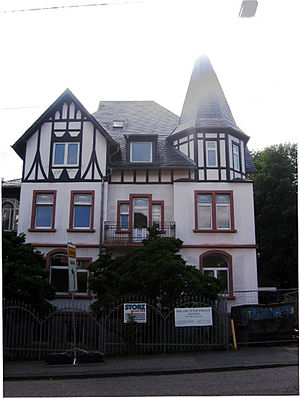 From 1921 George spent his summers in the hills on the south-western edge of Frankfurt at this house in Königstein, where he was looked after by his sister, Anna

George was born in 1868 in Büdesheim, today part of Bingen in the Prussian Rhine Province (now part of the German state of Rhineland-Palatinate). His father, also Stephan George, was an inn keeper and wine merchant.

His schooling was successfully concluded in 1888, after which he spent time in London and in Paris, where he was among the writers and artists who attended the Tuesday soirées held by the poet Stéphane Mallarmé. His early travels also included Vienna, where in 1891 he met, for the first time, Hugo von Hofmannsthal.

He began to publish poetry in the 1890s, while in his twenties. George founded and edited an important literary magazine called Blätter für die Kunst. He was also at the center of an influential literary and academic circle known as the George-Kreis, which included many of the leading young writers of the day, (for example Friedrich Gundolf and Ludwig Klages). In addition to sharing cultural interests, the circle reflected mystical and political themes. George knew and befriended the "Bohemian Countess" of Schwabing, Fanny zu Reventlow, who sometimes satirized the circle for its melodramatic actions and views. George and his writings were identified with the Conservative Revolutionary movement. He was a homosexual, yet exhorted his young friends to lead a celibate life like his own.[1][2]

In 1914 at the start of the war he foretold a sad end for Germany, and between then and 1916 wrote the pessimistic poem Der Krieg (The War). The outcome of the war saw the realization of his worst fears.

In 1933 after the Nazi takeover Joseph Goebbels offered him the presidency of a new Academy for the arts, which he refused. He also stayed away from celebrations prepared for his 65th birthday. Instead he travelled to Switzerland, where he died near Locarno. After his death, his body was interred before a delegation from the National Socialist government could attend the ceremony.[3]

George's poetry is characterized by an aristocratic and remote ethos; his verse is formal in style, lyrical in tone, and often arcane in language, being influenced by Greek classical forms, in revolt against the realist trend in German literature at the time. Believing that the purpose of poetry was distance from the world—he was a strong advocate of art for art's sake —George's writing had many ties with the French Symbolist movement and he was in contact with many of its representatives, including Stéphane Mallarmé and Paul Verlaine.

George was an important bridge between the 19th century and German modernism, even though he was a harsh critic of the then modern era. He experimented with various poetic metres, punctuation, obscure allusions and typography. George's "evident homosexuality"[4] is reflected in works such as Algabal and the love poetry he devoted to a gifted adolescent of his acquaintance named Maximilian Kronberger,[5] whom he called "Maximin", and whom he identified as a manifestation of the divine. The relevance of George's sexuality to his poetic work has been discussed by contemporary critics, such as Thomas Karlauf and Marita Keilson-Lauritz.[6]

Algabal is one of George's best remembered collections of poetry, if also one of his strangest; the title is a reference to the effete Roman emperor Elagabalus. George was also an important translator; he translated Dante, Shakespeare and Baudelaire into German.

George's late and seminal work, Das neue Reich ("The New Empire"), was published in 1928. He dedicated the work, including the Geheimes Deutschland ("Secret Germany") written in 1922, to Berthold Schenk Graf von Stauffenberg, who, in 1944, took part in the 20 July plot to assassinate Adolf Hitler.[8] It outlines a new form of society ruled by hierarchical spiritual aristocracy. George rejected any attempts to use it for mundane political purposes, especially National Socialism.

George was thought of by his contemporaries as a prophet and a priest, while he thought of himself as a messiah of a new kingdom that would be led by intellectual or artistic elites, bonded by their faithfulness to a strong leader. In his memoirs, Albert Speer claims to have seen George in the early 1920s and that his elder brother, Hermann, was a member of his inner circle: George "radiated dignity and pride and a kind of priestliness... there was something magnetic about him."

His poetry emphasized self-sacrifice, heroism and power, and he thus gained popularity in National Socialist circles. The group of writers and admirers that formed around him were known as the Georgekreis. Although many National Socialists claimed George as an important influence, George himself was aloof from such associations and did not get involved in politics. Shortly after the Nazi seizure of power, George left Germany for Switzerland where he died the same year.

Many of the leading members of the German Resistance to the Nazis were drawn from among his followers, notably the Stauffenberg brothers who were introduced to George by the poet and classical scholar Albrecht von Blumenthal. Although some members of the circle were explicitly anti-semitic (for example, Klages), it also included Jewish writers such as Gundolf, the historian Ernst Kantorowicz, and the Zionist Karl Wolfskehl. George was fond enough of his Jewish disciples, but he expressed reservations about their ever becoming a majority in the Circle.

Perhaps the most eminent poet who collaborated with George, but who ultimately refused membership in the Circle, was Hugo von Hofmannsthal, one of Austria's outstanding literary modernists. Later in life, Hofmannsthal wrote that no one had influenced him more deeply than George. Those closest to the "Master," as George had his disciples call him, included several members of the 20 July plot to assassinate Hitler, among them Claus von Stauffenberg himself. Stauffenberg frequently quoted George's poem Der Widerchrist (The Anti-Christ) to his fellow members of the 20 July plot.[9]

Outside the Circle, George's poetry was a major influence on the music of the Second Viennese School of composers, particularly during their Expressionist period. Arnold Schoenberg set George's poetry in such works as "Ich darf nicht dankend,", Op. 14/1 (1907), String Quartet No. 2, Op. 10 (1908), and The Book of the Hanging Gardens, Op. 15 (1909), while his student Anton Webern made use of George's verse in his early choral work Entflieht auf leichten Kähnen,, Op. 2, as well as in two sets of songs, Opp. 3 and 4 of 1909, and in several posthumously published vocal works from the same period.

In Rainer Werner Fassbinder's 1976 film Satansbraten the protagonist Walter Kranz attempts to model his life on that of George.

Each year links to its corresponding "[year] in poetry" article (except for Tage und Taten, a prose work):