Conrad Ferdinand Meyer (11 October 1825 – 28 November 1898) was a Swiss poet and historical novelist, a master of realism chiefly remembered for stirring narrative ballads like "Die Füße im Feuer" (The Feet in the Fire). 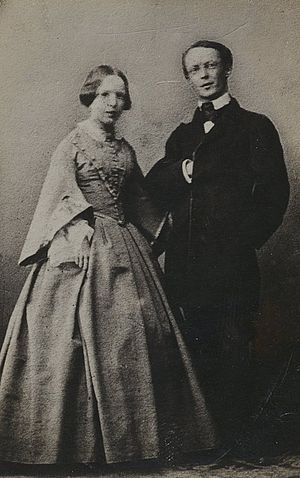 Conrad Ferdinand Meyer with his younger sister Betsy, around 1855 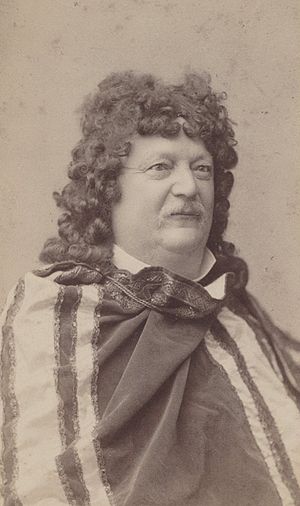 Conrad Ferdinand Meyer in a costume, around 1883

Meyer was born in Zürich. He was of patrician descent. His father, who died early, was a statesman and historian, while his mother was a highly cultured woman. Throughout his childhood two traits were observed that later characterized the man and the poet: he had a most scrupulous regard for neatness and cleanliness, and he lived and experienced more deeply in memory than in the immediate present. He suffered from bouts of mental illness, sometimes requiring hospitalization; his mother, similarly but more severely afflicted, killed herself.

Having finished the gymnasium, he took up the study of law, but history and the humanities were of greater interest to him. He went for considerable periods to Lausanne, Geneva and Paris, and in Italy, where he interested himself in historical research. The two historians who influenced Meyer particularly were Louis Vulliemin at Lausanne and Jacob Burckhardt at Bâsle whose book on the Culture of the Renaissance stimulated his imagination and interest. From his travels in France and Italy (1857) Meyer derived much inspiration for the settings and characters of his historical novels. In 1875 he settled at Kilchberg, above Zürich.

Meyer found his calling only late in life; for many years, being practically bilingual, he wavered between French and German. The Franco-Prussian War brought the final decision. In Meyer's novels, a great crisis often releases latent energies and precipitates a catastrophe. In the same manner, his own life which before the war had been one of dreaming and experimenting, was stirred to the very depths by the events of 1870. Meyer identified himself with the German cause, and as a manifesto of his sympathies published the little epic Hutten's Last Days in 1871. After that his works appeared in rapid succession.

In 1880, he received an honorary doctorate from the University of Zurich. He died in his home in Kilchberg on 28 November 1898.

His works were collected into 8 volumes in 1912.

The periods of the Renaissance and Counter Reformation furnished the subjects for most of his novels. Most of his plots spring from the deeper conflict between freedom and fate and culminate in a dramatic crisis in which the hero, in the face of a great temptation, loses his moral freedom and is forced to fulfill the higher law of destiny.

It is as a master of narrative ballads, often on historical themes, that Meyer is mostly remembered. His fiction also typically focuses on key historical moments from the Middle Ages, the Reformation and Counter-Reformation.

Meyer's lyric verse is almost entirely the product of his later years. He frequently celebrated human handiwork, especially works of art. Rome and the monumental work of Michelangelo were among decisive experiences in his life.