From Infogalactic: the planetary knowledge core
Jump to: navigation, search
For the movie by Dino Risi, see March on Rome (film).

The March on Rome (Italian: Marcia su Roma) was a march by which Italian dictator Benito Mussolini's National Fascist Party (Partito Nazionale Fascista, or PNF) came to power in the Kingdom of Italy (Regno d'Italia). The march took place from 22 to 29 October 1922.

In March 1919, Benito Mussolini founded the first "Italian Combat Leagues" (Fasci Italiani di Combattimento) at the beginning of the "two red years" (biennio rosso). He suffered a defeat in the election of November 1919. But, by the election of 1921, Mussolini entered the Parliament.

Out of his "Fascist" party the Milizia Volontaria per la Sicurezza Nazionale ("Blackshirts" or Squadristi) were formed. In August 1920, the Blackshirts were used to break the general strike which had started at the Alfa Romeo factory in Milan. In November 1920, after the assassination of Giordana (a right-wing municipal counsellor in Bologna), the Blackshirts were used as a repression tool by the state[citation needed] to crush the socialist movement (which included a strong anarcho-syndicalist component), especially in the Po Valley.

Trade unions were dissolved while left-wing mayors resigned. The fascists, included on Giovanni Giolitti's "National Union" lists at the May 1921 elections, then won 36 seats. Mussolini then withdrew his support to Giolitti and attempted to work out a temporary truce with the socialists by signing a "Pacification Pact" in summer 1921. This provoked a conflict with the most fanatical part of the movement, the Squadristi and their leaders the Ras ("Dukes", from an Ethiopian term). In July 1921, Giolitti attempted without success to dissolve the squadristi. The contract with the socialists was then broken at its turn in November 1921, Mussolini adopted a nationalist program and founded the National Fascist Party, which boasted 700,000 members in July 1922.[citation needed] In August, an anti-fascist general strike was triggered, but failed to rally the Italian People's Party (Partito Popolare Italiano) and was repressed by the fascists. A few days before the march, Mussolini consulted with the U.S. Ambassador Richard Washburn Child about whether the U.S. government would object to Fascist participation in a future Italian government. Child encouraged him to go ahead. When Mussolini learned that Prime Minister Luigi Facta had given Gabriele d'Annunzio the mission to organize a large demonstration on 4 November 1922 to celebrate the national victory during the war, he decided on the March to accelerate the process and sidestep any possible competition.[citation needed]. 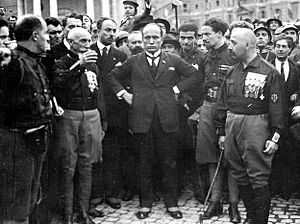 The quadrumvirs leading the Fascist Party, General Emilio De Bono, Italo Balbo (one of the most famous ras), Michele Bianchi and Cesare Maria de Vecchi, organized the March while the Duce stayed behind for most of the march, though he allowed pictures to be taken of him marching along with the Fascist marchers. Generals Gustavo Fara and Sante Ceccherini assisted to the preparations of the March of 18 October. Other organizers of the march included the Marquis Dino Perrone Compagni and Ulisse Igliori.

On 24 October 1922, Mussolini declared before 60,000 people at the Fascist Congress in Naples: "Our program is simple: we want to rule Italy."[1] Meanwhile, the Blackshirts, who had occupied the Po plain, took all strategic points of the country. On 26 October, former prime minister Antonio Salandra warned current Prime Minister Luigi Facta that Mussolini was demanding his resignation and that he was preparing to march on Rome. However, Facta did not believe Salandra and thought that Mussolini would govern quietly at his side. To meet the threat posed by the bands of fascist troops now gathering outside Rome, Luigi Facta (who had resigned but continued to hold power) ordered a state of siege for Rome. Having had previous conversations with the king about the repression of fascist violence, he was sure the king would agree.[2] However, King Victor Emmanuel III refused to sign the military order.[3] On 28 October, the King handed power to Mussolini, who was supported by the military, the business class, and the right-wing.

The march itself was composed of fewer than 30,000 men, but the king in part feared a civil war since the squadristi had already taken control of the Po plain and most of the country, while Fascism was no longer seen as a threat to the establishment. Mussolini was asked to form his cabinet on 29 October 1922, while some 25,000 Blackshirts were parading in Rome. Mussolini thus legally reached power, in accordance with the Statuto Albertino, the Italian Constitution. The March on Rome was not the conquest of power which Fascism later celebrated but rather the precipitating force behind a transfer of power within the framework of the constitution. This transition was made possible by the surrender of public authorities in the face of fascist intimidation. Many business and financial leaders believed it would be possible to manipulate Mussolini, whose early speeches and policies emphasized free market and laissez faire economics.[4] This proved overly optimistic, as Mussolini's corporatist view stressed total state power over businesses as much as over individuals, via governing industry bodies ("corporations") controlled by the Fascist party, a model in which businesses retained the responsibilities of property, but few if any of the freedoms.

Mussolini pretended to be willing to take a subalternate ministry in a Giolitti or Salandra cabinet, but then demanded the presidency of the Council. Fearing a conflict with the fascists, the ruling class thus handed power to Mussolini, who went on to install the dictatorship after the 10 June 1924 assassination of Giacomo Matteotti - who had finished writing The Fascisti Exposed: A Year of Fascist Domination - executed by Amerigo Dumini, leader of the Ceka, the secret police agency precursor to the OVRA.