Milazzo (Sicilian: Milazzu, Latin: Mylae[1]) is a town (comune) and is the third-largest city in the province of Messina, and is one of the most important cities of Sicily. The city proper has a population of over 32,000 inhabitants, and is the point of reference of a vaste territory, from Villafranca Tirrena to Patti (over 200,000 inhabitants). Is also, an important centre of the Metropolitan Area Stretto di Messina (who also includes areas of Reggio Calabria), with the near city Barcellona Pozzo di Gotto. Located at the base of a peninsula that juts into the Tyrrhenian Sea with a small promontory, the town is 43 kilometres (27 mi) from the capital city.

Over time, the town is moving forward towards the sea by recording a continuous development of agriculture and fishing activities, commercial and industrial.

Several civilizations settled in Milazzo and left signs of their presence from the Neolithic age. In Homer's Odyssey Milazzo is the place where Ulysses is shipwrecked and meets Polyphemus.

Historically, the town originated as the ancient Mylae, an outpost of Zancle, occupied before 648 BC, perhaps as early as 716 BC.[2] It was taken by the Athenians in 426 BC. The people of Rhegium planted here the exiles from Naxos and Catana in 395 BC as a counterpoise to Dionysius the Elder's foundation of Tyndaris; but Dionysius soon took it. In the bay Duilius won the first Roman naval victory over the Carthaginians (260 BC).

In 36 BC the naval battle of Mylae was fought offshore. The fleet of Octavian, commanded by Marcus Agrippa, engaged that of Sextus Pompey. While the battle was nearly a draw, Sextus could not replace his losses, and was thus weaker at the following battle of Naulochus (36 BC), where he was utterly defeated.[3]

After the fall of the Western Roman Empire, under the Byzantines, the town became one of the first episcopal seats of Sicily. In the 9th century Milazzo was conquered by the Arabs, who built here the first nucleus of the castle. Frederick II of Hohenstaufen further fortified the town and created here a personal hunting park. The castle was later mostly rebuilt in the age of Charles V of Spain.

Milazzo was also the seat of a battle in 1718 between Spain and Austria, and of another fought by Giuseppe Garibaldi against the Kingdom of Two Sicilies during his Expedition of the Thousand. 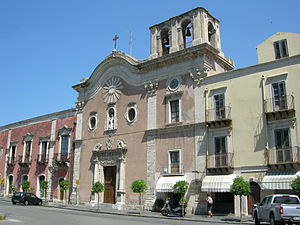 The church of the Carmine.

The port of Milazzo is a departure point for ferries to the Aeolian Islands and Naples.