Mining in the United States

Mining in the United States has been active since colonial times, but became a major industry in the 19th century with a number of new mineral discoveries causing a series of mining "rushes." 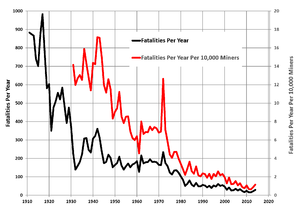 Non-coal mining fatalities in the United States, 1911-2014 (data from US Department of Labor)

From 1880 to 1910, mine accidents claimed thousands of fatalities. Where annual mining deaths had numbered more than 1,000 a year during the early part of the 20th century, they decreased to an average of about 500 during the late 1950s, and to 93 during the 1990s.[1] In addition to deaths, many thousands more are injured (an average of 21,351 injuries per year between 1991 and 1999), but overall there has been a downward trend of deaths and injuries.

The Monongah Mining Disaster was the worst mining accident of American history; 362 workers were killed in an underground explosion on December 6, 1907 in Monongah, West Virginia. The U.S. Bureau of Mines was created in 1910 to investigate accidents, advise industry, conduct production and safety research, and teach courses in accident prevention, first aid, and mine rescue. The Federal Coal Mine Health and Safety Acts of 1969 and 1977 set further safety standards for the industry.

In 1959, the Knox Mine Disaster occurred in Port Griffith, Pennsylvania. The swelling Susquehanna river collapsed into a mine under it and resulted in 12 deaths. In Plymouth, Pennsylvania, the Avondale Mine Disaster resulted in the deaths of 108 miners and two rescue workers after a fire in the only shaft eliminated the oxygen in the mine. Federal laws for mining safety ensued this disaster. Pennsylvania suffered another disaster in 2002 at Quecreek, 9 miners were trapped underground and subsequently rescued after 78 hours. During 2006, 72 miners lost their lives at work, 47 by coal mining. The majority of these fatalities occurred in Kentucky and West Virginia, including the Sago Mine Disaster.[2][3] On April 5, 2010, in the Upper Big Branch Mine disaster an underground explosion caused the deaths of 29 miners.