Public policy consists of a system of laws, regulatory measures, courses of action, and funding priorities by a government or its representatives. Public policy decisions are often decided by a group of individuals with different beliefs and interests.[1] The policies of the United States of America comprise all actions taken by its federal government. The executive branch is the primary entity through which policies are enacted, however the policies are derived from a collection of laws, executive decisions, and legal precedents. 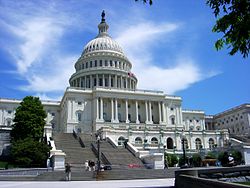 The drug policy of the United States is established by The Office of National Drug Control Policy, a former cabinet-level[21] component of the Executive Office of the President of the United States, which was established by the Anti-Drug Abuse Act of 1988. Its stated goal is to establish policies, priorities, and objectives to eradicate illicit drug use, drug manufacturing, and trafficking, drug-related crime and violence, and drug-related health consequences in the U.S.

The Office of National Drug Control Policy's two current specific goals are to "curtail illicit drug consumption in America" and to "improve the public health and public safety of the American people by reducing the consequences of drug abuse."[22] They plan to achieve these goals by taking the following actions:

The energy policy of the United States addresses issues of energy production, distribution, and consumption, such as building codes and gas mileage standards. The United States Department of Energy plays a major role, and its mission is "to ensure America's security and prosperity by addressing its energy, environmental, and nuclear challenges through transformative science and technology solutions."

Moreover, the White House provides a summary of the United States' current condition regarding its energy policy: "For decades it has been clear that the way Americans produce and consume energy is not sustainable. Our addiction to foreign oil and fossil fuels puts our economy, our national security and our environment at risk. To take this country in a new direction, the President is working with Congress to pass comprehensive energy and climate legislation to protect our nation from the serious economic and strategic risks associated with our reliance on foreign oil, to create jobs, and to cut down on the carbon pollution that contributes to the destabilizing effects of climate change."

The following is a snapshot of the United States' current energy policy goals:

The Federal Reserve, Treasury, and Securities and Exchange Commission took several steps on September 19 to intervene in the crisis. To stop the potential run on money market mutual funds, the Treasury also announced on September 19 a new $50 billion program to insure the investments, similar to the Federal Deposit Insurance Corporation (FDIC) program.[24] Part of the announcements included temporary exceptions to section 23A and 23B (Regulation W), allowing financial groups to more easily share funds within their group. The exceptions would expire on January 30, 2009, unless extended by the Federal Reserve Board.[25] The Securities and Exchange Commission announced termination of short-selling of 799 financial stocks, as well as action against naked short selling, as part of its reaction to the mortgage crisis.[26]